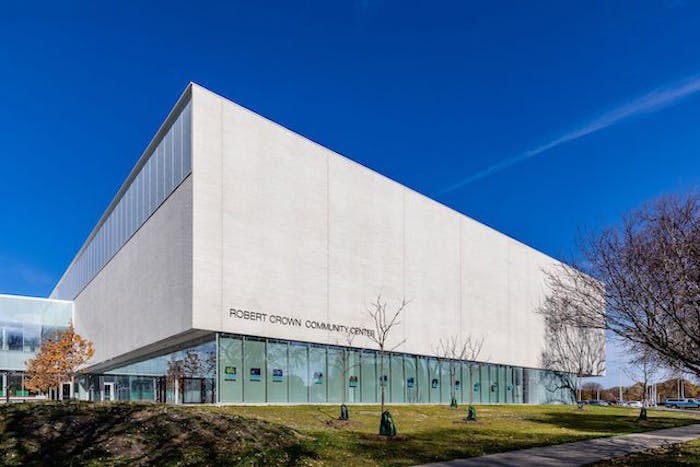 The Robert Crown Center, in the City of Evanston, Illinois, is a valuable resource for the community. Its indoor spaces and adjacent athletic fields have made many community programs possible since 1974, including hockey, figure skating, football, lacrosse, dancing, summer camps, preschool and more. However, over the years, there has been a growing need to accommodate larger populations in the spaces and programs—and the Robert Crown Center simply could not meet those needs. Additionally, the center was showing signs of severe wear with several civil, structural, architectural and mechanical issues. After several years spent researching how to make the building fit the programmatic needs of the residents, it was determined that demolishing the existing center and building a new facility would be the most appropriate choice. To meet aesthetic and environmental goals for the building, Echelon’s Cordova Stone™ was chosen for its façade.

The Robert Crown Center was located in the middle of the 14-acre Robert Crown Park. For the new center, a site was chosen on the west side of the park. “During the concept design phase, we looked at every iteration of site configuration possible before choosing the final location. We were focused on right-sizing everything from the footprint of the building to its parking lot, three athletic fields and natural surrounding space,” explains Brian Foote of Woodhouse Tinucci Architects, the architect of record on the project.  The company worked with collaborating partner MJMA, based in Toronto, to design the facility. “Being able to leave the original building in place and provide programming throughout the construction of the new facility was an added benefit of building in a different location.”

The project’s goal was to provide the community with a space that could accommodate current and future needs for recreational programs. It was to include a fully licensed preschool and childcare facility, an indoor athletic space and basketball courts, indoor running track, two full-sized ice rinks, three artificial turf athletic fields, meeting rooms and multi-purpose rooms. Additionally, the center is in an area that doesn’t have its own branch library, nor another one within convenient proximity. In choosing to rebuild the Center, the City decided to include a new branch of the Evanston Public Library at the location.

“When designing the new center, we were basically trying to make the building efficiently perform like one twice its size to accommodate the multiple, overlapping uses,” says Foote.

Examples of solutions for hybridization of spaces and programs include creation of an outdoor reading garden that connects with the library, preschool and lobby areas; and the library has sliding doors that can disappear to expand the space to include the lobby.

Foote says another important design element was that every space has some kind of connection to others, whether it’s literally through access or visually through windows or hallways. “In this way, the design showcased the overlap of the programs taking place simultaneously” he says. For example, the basketball court was placed on the second floor, with windows overlooking the library. “There are not too many hybrid community centers like this in the United States.”

Of course, this created unique challenges in terms of maintaining acoustical and environmental separation between spaces. The ice rink requires cold temperatures; the gym is often a humid space and the library prefers it not be either. “The key was getting it all to happen in a way the building could open upon itself and not feel like there was a drastic climate change from one space to the other,” says Foote.

As important as it was to make the interior spaces work with each other, it was important that the building’s exterior fit well within its environment. Albeit in a park, the new center was nestled within a densely populated suburban neighborhood, with homes on all sides. “We wanted it to feel part of the residential neighborhood and not like an institution or athletic arena. Often these types of long-span spaces are pre-cast or metal clad and that wasn’t appropriate for this neighborhood,” Foote explains.

Designers wanted a masonry solution that worked economically and offered the modular scale appropriate for the scale of the building. Architects chose Echelon’s Cordova Stone. Foote notes, “The building ended up being long and lean and we liked that Cordova in 4” x 24” would imitate the proportionality and scale of the building.” He adds they looked at several color choices, wanting a light and airy feel. “Through the design and glazing, we endeavored to break down the volume to minimize its heft on the site. The light-colored Alabaster helped with that.”

As an added benefit, installation of Cordova Stone is expedited because it can be cut to fulfill the dimensional needs of any project. This can be done by a mason in the field or precut at the manufacturing plant. When cut, Cordova Stone retains its consistent color throughout, thanks to the all-natural aggregates that are dispersed equally within it. Cordova Stone units, when properly installed and cleaned, require virtually no maintenance other than standard cleaning.

Another of the project’s goals was to obtain LEED certification, and LEED Silver certification is currently pending. “Cordova as a major material element contributed to our ability to achieve that,” says Foote.  The manufacturer of Cordova Stone, Northfield, also provided environmental and health product declarations for LEED certification.

The 130,000 square foot Robert Crown Community Center opened in March of 2020, with the old center demolished around the same time. The outdoor athletic fields were completed by the end of the summer, in time for use for fall sports. The interior spaces should be able to serve the community’s programming needs for the foreseeable future and the modern, clean and durable exterior of Cordova Stone will help it stand the test of time.

Echelon Masonry is North America’s largest manufacturer of the highest-quality masonry products for the architectural and masonry industries. As the consolidated masonry brand for Oldcastle APG, a CRH Company, Echelon offers the widest masonry portfolio in the industry, from trusted brands like Trenwyth to innovative product solutions like the InsulTech System, as well as the localized, one-on-one support needed to bring the most ambitious projects to life. Since 2015, Echelon Masonry has been committed to supporting the time-honored tradition of masonry and advancing the craft for the 21st century and beyond. www.EchelonMasonry.com