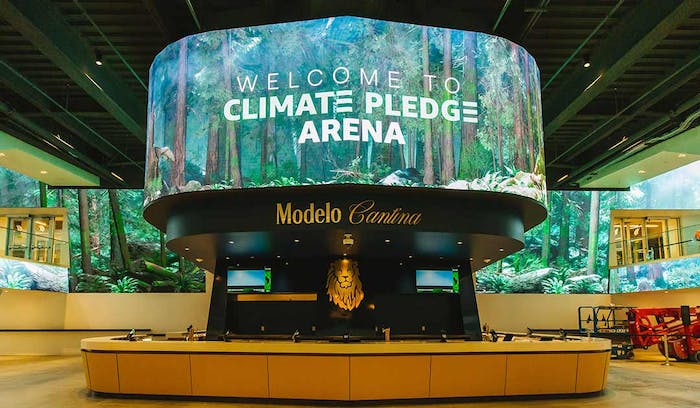 224 LED displays, most in the world at a sports and entertainment venue, are installed and integrated into the fan experience including dual hanging displays

BROOKINGS, S.D. – Oct. 20, 2021 – As professional hockey returns to Seattle, Daktronics (NASDAQ-DAKT) of Brookings, South Dakota, in conjunction with the Oak View Group, has been selected to manufacture and install 224 LED displays at Climate Pledge Arena, the new home of the Seattle Kraken. The installation features 28,175 square feet of digital signage totaling more than 145 million pixels and dual hanging display configurations featuring 2,720 square feet each. No sporting venue in the world will have more LED displays, including 173 displays outside the main seating bowl of the arena.

“Daktronics is elevating our fan experience with the most LED displays ever installed at a sports venue,” said Seattle Kraken SVP, Entertainment Experience & Presentation Jonny Greco. “With all those pixels it is imperative we think of the guest journey from the minute they set foot on the Seattle Center Campus all the way to sitting in their seats at Climate Pledge Arena. Having a world-class sports entertainment facility under a historic roof allows us to find a happy fusion of tradition and technology.”

“With 224 displays, audiences will be immersed in the experience from the moment that they arrive and entertained throughout every event held at Climate Pledge Arena,” said Daktronics President and CEO Reece Kurtenbach. “This installation will be an icon for the Pacific Northwest. We’re excited to install the LED technology to engage their audiences and to help usher men’s professional hockey back to the city of Seattle.”

Throughout the concourses and atriums of the arena, 100 LED displays are installed in varying locations and configurations to enhance the fan experience. These displays total 13,175 square feet and feature 2.5- and 3.9-millimeter pixel spacings. This includes a large column wrap, atrium bridge displays, The Climate Pledge Living Wall feature and east concourse picture frame features.

Outside of the arena, 51 LED displays totaling 3,830 square feet are installed to communicate with people as they pass by and audiences as they arrive for events. These outdoor plaza displays brand the facility immediately upon arrival and parking displays give direction to help with the flow of traffic. These displays feature 3.9- and 5.9-millimeter pixel spacings.

Climate Pledge Arena, located at Seattle Center is complete redevelopment of an historic landmark, originally built for the 1962 Seattle World's Fair. It is an industry first, including being the first net zero certified arena in the world.  Home to the NHL’s Seattle Kraken, WNBA's Seattle Storm, and the world's biggest performers of live music and events, Climate Pledge Arena opens October 22, 2021.

Climate Pledge Arena will serve as a long-lasting and regular reminder of the urgent need for climate action. The Climate Pledge, which was founded by Amazon and Global Optimism in 2019, is a commitment from companies globally to be net zero carbon by 2040. Visit climatepledgearena.com

The Seattle Kraken are the National Hockey League's newest franchise, set to play their inaugural season in 2021-2022 at Climate Pledge Arena at Seattle Center, developed by Oak View Group. Visit www.nhl.com/kraken for the latest news and information including press releases, multimedia content and the latest hires.

Oak View Group (OVG) is a global sports and entertainment company founded by Tim Leiweke and Irving Azoff in 2015. OVG is focused on being a positive disruption to business as usual in the sports and live entertainment industry and currently has eight divisions across four global offices (Los Angeles, New York, London, and Philadelphia). OVG is leading the redevelopment and operations of Climate Pledge Arena at Seattle Center as well as leading arena development projects for UBS Arena in Belmont Park, NY; Moody Center in Austin, TX; New Arena in Coachella Valley, CA; and Co-op Live in Manchester, UK. OVG Global Partnerships, a division of OVG, is the sales and marketing arm responsible for selling across all OVG arena development projects. OVG Facilities, a division of OVG, is the facility management, booking, security, and sanitization services arm that performs services for both OVG’s arena development projects and clients on a 3rd party basis. OVG Media & Conferences, a division of OVG, publishes Pollstar and VenuesNow, in addition to hosting live entertainment-centric conferences around the world. OVG’s Arena Alliance, a division of OVG, is a collection of the top 32 venues in North America that provides a platform for booking, content, and sponsorship sales opportunities. Learn more at OakViewGroup.com, and follow OVG on Facebook, Instagram, Twitter, and LinkedIn.

Blue Goji announced that it has acquired the assets and intellectual property of fellow health and wellness technology company Interactive Fitness Holdings...
April 26, 2022