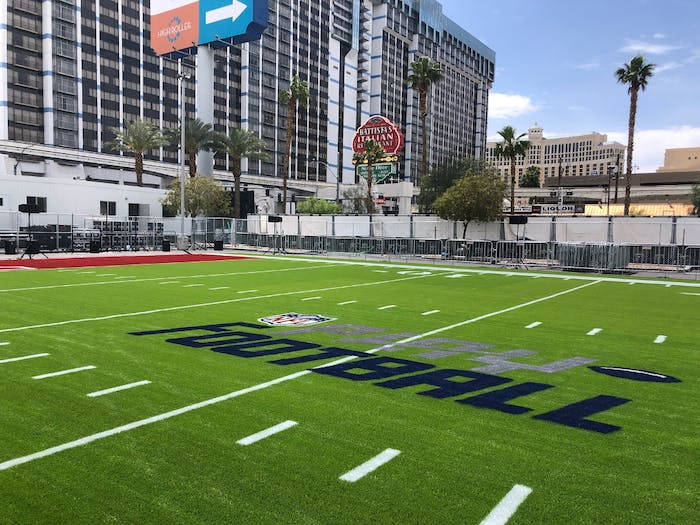 Close to half a million fans of the National Football League are flocking to the city that doesn’t sleep, Las Vegas, Nevada. The 2022 NFL Draft picks will be walking on water as the stage is literally floating on top of the Bellagio fountains along the Las Vegas Strip. Professional football fans will have their own monumental moment setting foot on the same type of synthetic turf that many NFL teams play on today, while testing their sprinting abilities against virtual NFL draft picks only a few yards away.

Hellas Construction installed a pair of Matrix Helix® synthetic turf fields near the epicenter at the NFL Draft. The largest playing surface is 100 feet by 200 feet and is located near the draft theater. The 40-yard dash runway field measures 160 feet by 20 feet and is also conveniently located behind the High Roller Ferris Wheel close to the Caesars Forum. The 87th NFL draft will be one for the record books as fans will get up close and personal after coronavirus cancelled the Las Vegas NFL draft appearance in 2020. NFL Commissioner Roger Goodell announced draft picks from the basement of his house two years ago.

SoFi stadium at Hollywood Park in Inglewood, California is the newest NFL stadium that Hellas has installed Matrix Helix synthetic turf. Hellas also installed a paved into place Cushdrain®, which will help reduce concussions, while allowing the field to drain better. The site of the NFL’s 2022 championship game is home to the Los Angeles Rams and Los Angeles Chargers.

As America’s largest vertically integrated sports construction contractor, Hellas was uniquely positioned to meet the athletic surfacing needs of multiple NFL teams installing indoor synthetic turf for the Washington Commanders, Tennessee Titans, Miami Dolphins, Kansas City Chiefs, and Jacksonville Jaguars with more to come in 2023. “Hellas is proud to be a part of the NFL Draft Experience,” says Hellas CEO & President Reed Seaton. “Hellas is making a huge impact in the NFL with our Matrix Helix turf system from the ground up at outdoor stadiums and indoor facilities across the country”.

Hellas manufactures its own proprietary turf at a fiber plant in Dadeville, Alabama and tufts the turf at Hellas Textiles in Chatsworth, Georgia. Hellas builds court and track systems in addition to multiple types of synthetic turf. Installing projects from the ground up begins with design build and planning, this enables Hellas to serve as a turn-key sports surfacing partner for clients around the world from start to finish.

Headquartered in Austin, Texas, is the largest vertically integrated sports construction contractor in the United States, specializing in the general construction of sports facilities and sports surfaces. Hellas champions innovative artificial turf manufacturing, base construction, field, track and tennis planning, along with installation and maintenance. Hellas products are protected by one or more of the following patents: 6,800,339; 7,838,096; 7,249,913; 7,364,634.