Circle of trust time AB readers: Between us, I really had no idea what to expect at the 2013 Athletic Business Conference & Expo, held last November in San Diego. Which is odd for me to admit, as I consider myself somewhat of a trade show warrior. 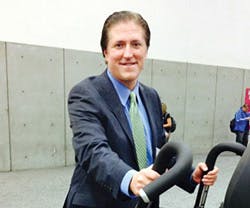 Armed with a pen and notepad as my weapons of choice and a business suit as my armor, I have successfully conquered more than 100 trade shows in my career. But this one was different. It was our show, a show that required months of meticulous planning by our incredibly hard-working conference team. Did I mention I would also be introducing keynote speaker Magic Johnson to a room of more than 2,000 attendees, and I'm not the greatest public speaker? Here's a look at some of the highlights of my first ABC:

GOLF TOURNAMENT
A late return from morning facility tours delayed my arrival on Coronado Island for the ABC golf tournament, but when I met up with my foursome, we were already three strokes under.

Finally meeting Rob and Barry Sinking a 20-foot birdie putt on my first hole despite no practice and limited ability boosted my confidence and inspired my team to go on and... par virtually every remaining hole, losing out on the team trophy by three strokes. But the time spent with Chris Kay, recreation manager at the Calgary Winter Club, and my two new buddies from Motionsoft — Hossein and Leigh, the brilliant minds behind the popular podcast series "Gym Class: Heroes of Fitness" — was without question the most enjoyable time I have ever spent on a golf course. Later that evening, the foursome was reunited at the iClubs reception. 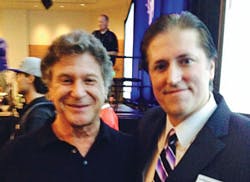 KEYNOTES AND CARDIO
After attending a great seminar on recreation center renovations, I was off to prepare for my first keynote introduction: AgeWave CEO Ken Dychtwald. Everyone in attendance, including yours truly, was blown away by Ken's great presentation on the longevity revolution and the importance of health and wellness throughout all stages of life.

The next stop was the exhibit hall, where hundreds of exhibitors and thousands of attendees mutually committed to health, sports, recreation and wellness came together.

Introducing Magic Johnson Thanks to the great folks at Technogym, Cybex and Octane Fitness, I was able to work on my own health and wellness by testing out their equipment in my less-than-ideal business suit. Another highlight on the trade show floor was meeting one of the truly inspirational people in this business: Augie Nieto.

The grand finale of my ABC experience was introducing Magic Johnson. I had rehearsed his introduction numerous times but was still nervous I would make a mistake. And I did, although not in the introduction itself. 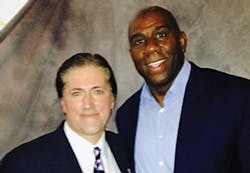 Hanging with MagicAccording to my wife, who teaches public speaking in high school, it was my body language: The old hands-in-the-pockets mistake. But introducing Magic Johnson and shaking his hand as he came on stage to speak to an enthusiastic audience is an experience I will never forget.

What will this year's show in Orlando bring? I, for one, can't wait to find out, and look forward to reuniting with my new friends in the AB community.

This article originally appeared in the January 2014 issue of Athletic Business under the headline, "Inside My First ABC."