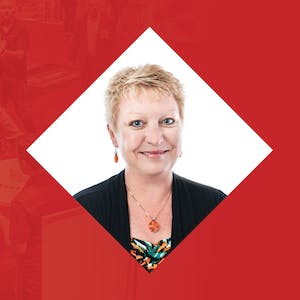 Madison, Wis. — AB Media Inc., publisher of Athletic Business magazine and producer of the annual AB Show, announces the retirement of Sue Searls, who played key roles in the growth of both products during her 40-year career at the company.

Searls is best known for helming AB Show full time starting in April 1998. She first appeared on the Athletic Business masthead in July 1982 as editorial production manager, before ascending to assistant editor, managing editor, editor and ultimately publisher/editor, a position she held from June 1993 through March 1998.

As AB Show director, Searls cultivated partnerships with the National Alliance for Youth Sports, the Medical Fitness Association, the National Intramural-Recreational Sports Association (now known simply as NIRSA) and the four major branches of the United States military — not to mention relationships among the tens of thousands of athletics, fitness and recreation professionals who comprise AB’s core audience.

“I think what makes me proudest are all the connections I developed in the industry and the people I helped over the years, whether it was a reader looking for a product or an attendee put in charge of planning a facility,” Searls says. “This industry is filled with passionate people — operators, architects and vendors — who design, operate, program and supply facilities. When I started, we were just starting to see a building boom in college recreation centers, clubs and high school facilities — and later, public recreation centers that were far more than a gym and a meeting room. Now, we’re seeing many of those collegiate, public and private facilities going through renovations to meet the needs of today’s users. So much has changed, and I really feel like I grew up in this industry.”

A constant throughout Searls’ AB Show career has been her ability to assemble industry-leading educational tracks featuring the brightest minds in the business. “Our speakers — there are so many I will miss, along with the vendors and architects, many of whom are good friends and have been in this industry almost as long as I have,” she says.

“Sue’s been a key factor behind the success of AB Show from day one,” says AB Media board chairwoman Gretchen Kelsey Brown. “From her deep friendships with a vast network of industry leaders, to her unique understanding of information essential to AB’s audience, to her amazing ability to juggle a multitude of responsibilities simultaneously, Sue’s contributions have been enormous. We will certainly miss her!”

Adds AB Media president Shawn Gahagan, “Congratulations to Sue on her retirement. For 40 years, she has been instrumental in helping build the Athletic Business brand to what it is today. We greatly appreciate and will miss her loyal dedication, countless contributions and the tireless hard work she brought to AB Media and the industry as a whole. Sue is a shining example to all of us of what it means to be a great colleague, industry leader and friend. Sue will always be part of the AB Media family and we wish her a wonderful retirement after a stellar career.”