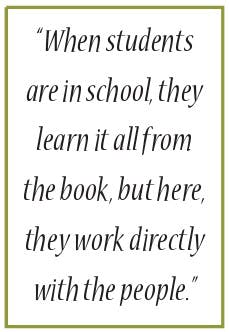 While college students sit in lectures, read books and write papers about their chosen field of study, they can't truly know what it's like to experience that field of study until they enter the workforce. For some, this opportunity arises only after graduation, but for many others, internships are offering the practical experience necessary to give students a head start in their careers.

Among the array of internship opportunities is a growing number in parks and recreation departments. For example, a new program run by the Coconut Creek (Fla.) Parks and Recreation Division in cooperation with Boca Raton-based Florida Atlantic University places one intern a semester with the recreation department. The program is set up so that students majoring in either exercise science or recreation management will be recommended for internships by the university, and will then go through an interview process before being selected. Once hired, an exercise science intern will be assigned to the department's fitness program, while a recreation management intern will work in the department offices, organizing youth sports leagues or summer day camps, or performing administrative duties. Interns will be paid $9 an hour for a 30-hour week. They are required to work a total of 400 hours in order to obtain their degree.

This semester's intern (the person had not been hired at press time) was scheduled to be one of the exercise science majors slated to work in the fitness program, performing daily assessments of and orientations for members, setting up a lecture series, and conducting exercise classes. "The most important things for interns to learn are how to work well one-on-one with program participants and how to program," says Danielle DeBarros, fitness supervisor for the recreation division. "When students are in school, they learn it all from the book, but here, they work directly with the people. A fitness-center user will come in with limitations and with certain goals, and the interns have to learn to devise a program according to that member's needs."

While Coconut Creek's program is just beginning, many other internship programs have been in place for a number of years. A more than 20-year-old internship program in Arlington Heights, Ill., for example, accepts two interns a semester and focuses on giving them as varied an experience as possible. "The purpose of the internship program is to give students in-depth, on-the-job experiences and training," says Roger Key, director of recreation and facilities for the Arlington Heights Park District. "We try to give them a broad, general exposure to the parks and recreation profession. Our intention is to make sure that once they finish, they've applied these experiences to their academic background. Then they can interview well and be very successful when they apply for a job."

Interns in the 12- to 18-week Arlington Heights program are paid $250 for a 40-hour work week. Like most internship programs in recreation, students in Arlington Heights' department receive college credit for their work, though the number of credits received varies with each university. Interns will typically spend two to three weeks working in one area of the department before moving to another. They may work in facility management at a community center or help an athletic supervisor with a specific type of programming.

One of the greatest benefits of the program is that it allows staff members to identify interns who would be desirable future employees. "We've hired some interns directly if we've had an opening," says Key. "We might keep track of others, and when we have an opening we go after them, just because we've seen how well they relate to the public or how well they develop a program or manage a facility. We know they have the chemistry that we want in our organization."

In addition, many staff members enjoy playing the role of mentor, taking advantage of the opportunity to pass on their knowledge to young men and women. "Most of us had to go through this ourselves," says Key. "The internship program is a way for us to help build the profession and help keep alive a philosophy that we think is important."

Although interns bring many benefits to the department, there is also a downside, according to Key. "As much as interns are nice to have," he says, "they do take a lot of staff time - orientation, meeting with them regularly, answering their questions. They've had classes, but they really have no idea what a park district is all about. The more successful ones come in, and they may have worked at a park during the summer, or they may have been a lifeguard or a daycamp counselor. Those people come in and are off and running."

Supervisors of an internship program in Boulder, Colo., also report a wide spectrum of abilities among interns. Says Summer Kennedy, program supervisor for fitness and wellness for the Boulder Parks and Recreation Department, "Sometimes you get an intern who needs a great deal of direction and direct supervision. But if you get one who has a lot of gumption, it's wonderful. It eases your workload."

When interns are not doing satisfactory work, it takes extra time and effort on the part of staff members, Kennedy says. She supervised one intern whose work was very poor, and she and other staff members not only contacted his school advisor, but also confronted the intern to tell him that he was not doing well and to point out areas in which he needed to improve. "You want your intern to be able to work unsupervised, so that you don't have to skip a beat," she says. "They report to me, and I report to them, but I want them to be able to carry a project through and do it without people holding their hand the whole time."

Kennedy supervises two interns a semester in the fitness and wellness area, which is just one of many internship opportunities offered through Boulder's recreation department. Other internships include facility management jobs at several recreation centers, as well as summer youth programming, athletics, therapeutic recreation and urban parks management.

Although they are unpaid, interns supervised by Kennedy are given a great deal of flexibility. They not only choose their own projects, they also choose how many hours they will work. "We interview them before they come on board," says Kennedy. "We ask them what they want to do when they graduate, and then we give them a selection of projects to choose from. From there we can tailor an internship that addresses their goals."

Examples of projects Kennedy gives her interns include revising the department's training manual, writing grants and organizing special events. "I try to teach them how to set priorities, create a schedule and meet deadlines," Kennedy says. "I take them to staff meetings and encourage them to participate."

"When interns come in, they are typically very excited and willing to jump into projects, and they bring new perspectives and ideas," adds Key. "A lot of times, you're in your profession so long that you may get a little stale. The interns bring a new charge of energy."