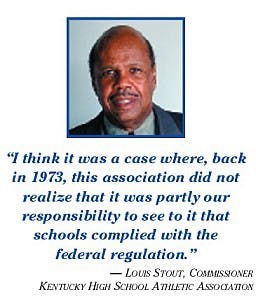 Of all the arguments used against Title IX that rankle gender-equity advocates, none prompts more anger than the one that invokes the word "quota" to describe the groundbreaking law. By insisting on "substantial proportionality" as a goal, this argument goes, Title IX in effect limits participation among males to the lower participation level of females.

No, say Title IX supporters - compliance means that existing funds, facilities, schedules and so on simply need to be divided equally. The essence of Title IX, they say, is about expanding opportunities for participation in sports.

Thus, it comes as a surprise to hear of an athletics administrator and gender-equity advocate talking about taking away all athletic opportunities if schools refuse to comply with Title IX.

That was the message recently communicated by Louis Stout, commissioner of the Kentucky High School Athletic Association. On Oct. 4, Stout went before a state Board of Education committee and told its members that the current system of bylaws that allows him to fine KHSAA member schools between $50 and $1,000 for noncompliance was no longer sufficient. If he had to bar offending schools from playing any games - and he was prepared to do just that - he wanted the board to give him its unconditional support. A letter to that effect was set to be distributed to all KHSAA member schools by the end of October.

This is the association's second large-scale mailing regarding gender equity. Three years ago, the KHSAA hired a gender-equity consultant to create an action plan for its schools; each member school subsequently received packages of materials that included a compliance manual. The association began auditing its members immediately, part of a process first put into place at the interscholastic level by the Minnesota State High School League. Through random audits of 22 schools per year and assessments of materials submitted by schools to the association, the KHSAA found that more than 60 percent of those studied were giving preferential treatment to boys' sports.

Stout, whose involvement with the KHSAA dates from 1971, believes his organization is at least partly to blame for this state of affairs.

"I think it was a case where, back in 1973, this association did not realize that even though we received no federal funding it was partly our responsibility to see to it that schools complied with the federal regulation," Stout says. "Consequently we didn't do anything with it. It's kind of too bad, because I don't think we'd be at this point now if we'd acted on it in 1975. But we're here, and although we have a few schools that are dragging their feet, our members are responding extremely well."

Although he has hit a number of schools with small fines, Stout notes with some exasperation that the vast majority have not been for inadequate facilities or inequitable scheduling of contests, but for failure to comply with the KHSAA's requests for information that it could use to assess the schools' compliance with Title IX. In such circumstances, Stout says he has no choice but to be given free reign to impose the interscholastic sports equivalent of martial law.

"Our goal is to have youngsters participating, but by the same token as an association of only 286 member schools, there are only so many people we can impose penalties on," says Stout. The KHSAA will do anything it can to help schools comply with Title IX, he adds, but schools need to know that any further delays won't be tolerated.