Of Cheers and Jeers 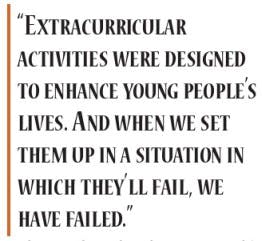 Jen Mead, an assistant cheerleading coach at Sun Prairie (Wis.) High School, was on the sidelines last year at an away football game when an unruly fan worked his way onto the field, mingled with the Cardinals' sideline cheerleaders and spat upon Mead after she asked him to leave. But the culprit was not a fan of the opposing team. Rather, he was a Sun Prairie student who ultimately cost his school the tradition of sideline cheerleading at all home and away football and basketball games.

Such behavior was hardly a rare occurrence at Sun Prairie. For years, students in the stands had hurled hot dogs, candy, soda bottles and coins at the all-girls sideline cheerleading squads, which were located about five feet away from fans. Because the culprits were many, administrators claimed it was often difficult to catch the perpetrators. "I remember one of the girls saying, 'Hey, we made $4.75. It was a pretty decent night,' " says Steve Powers, program director of Sun Prairie's cheerleading program. Unfortunately, he's not kidding.

"I understand that at any sort of performance involved with athletics, there's never going to be a completely positive environment," Powers says. "I would not expect the kids or coaches to be immune to that. But I think there's a difference between a snide remark and consistent harassment. Extracurricular activities were designed to enhance young people's lives. And when we set them up in a situation in which they'll fail, we have failed."

Discontinuing sideline cheering has freed up much more practice time devoted to coed cheer competitions (where cheerleaders perform routines to music), a move Powers says will likely result in more cheer championships and perhaps even greater acknowledgment from students of the "sport" of cheerleading. "To me, sideline cheerleading is not cheerleading," he says. "The message we're trying to send is that we're performers, and we're only going to perform to music. I think we're on to something really positive here for the team."

Despite the fact that Wisconsin does not recognize cheerleading as an official sport, Sun Prairie's coed competitive cheer team won its fifth national title at the United Performing Association championship in March, and also won the overall grand champion title in a field of 83 teams in 10 divisions. Mention the Cardinals' squad to Julie Davis, the president and founding editor of American Cheerleader magazine, and the recognition and respect is instantly evident in her voice.

All of which begs the question: Why does the team garner respect on a national level but is subjected to abuse at home? Powers doesn't know the answer. "If we sucked and the fans harassed us, then we might understand it a little bit more," he says, adding that such excessive behavior would still be unacceptable. "We can hold the administration as responsible as we want, but let's be honest - by the time you're 14, 15, 16 years old, you know how you should behave. We hold the students responsible for this."

Actually, school administrators have been supportive. During the past two years, the administration encouraged the girls to cheer farther away from student sections and at a variety of different events - boys' basketball one night, girls' basketball another night and hockey the following weekend, for example - rather than devote all their energies to one sport. "At that point, we were focused on getting the kids excited by giving them more opportunities," says Scott Nelson, Sun Prairie's athletic director, who calls the general student population's lack of respect for their cheerleading peers "pretty disheartening."

When the problems continued, Nelson says he understood the competitive direction Powers and the cheerleaders wanted to take. "The definition of cheerleading is changing," he says. "This is what the kids really want to do. My whole thought process about the activity is evolving as Steve tries to help his kids and his program."

This year, Sun Prairie also decided to quash cheerleading entirely at hockey games and wrestling matches - an action necessitated as much by economics as harassment, Powers says. Most of the school's cheerleading coaches only earn between $200 and $500 a year and simply did not want to devote time to overseeing hockey or wrestling cheer squads. Hockey crowds, he adds, were among the most volatile toward the cheerleaders.

The drastic move to eliminate sideline cheerleading created some minor repercussions. Powers says that some of his cheerleaders were shut out of football team activities in which they had previously participated. Even Davis is surprised that Sun Prairie would eliminate such an integral function of high school sports. "I haven't heard of any other cheer teams not participating in a variety of spirit activities," she says. "This sounds like a very unusual situation to me and one that you don't want to hear about."

This isn't the first time the school has rewritten its cheerleading policies because of disrespectful fans. The Cardinals used to field coed cheerleaders at select athletic events - Powers was even a member of the school's first coed squad back in 1988-89 - but that changed in 1999 after an away boys' basketball game during which Sun Prairie fans taunted and harassed the male cheerleaders from the stands. At first, Powers recalls, coaches thought the heckling was coming from the opponent's fans, until one of the boys on his team told him otherwise. "That was the last time we had coed cheerleading at any game," Powers says. "It was a pretty embarrassing day."

The school created a varsity-level, girls-only squad to replace the coed team, because coaches believed the jeers were specifically aimed at the boys. They quickly learned, as the problems escalated, that that wasn't the case. In recent years, school officials instructed their ticket-takers about how to detect students who may have consumed alcohol prior to a game, and they trained game supervisors to watch student sections more attentively at football games by patrolling up and down the stadium aisles so they could see in between the rows. Sometimes, the culprits were caught and banished from the game. Nelson says a few students were even ordered not to attend games for the rest of a given season. "I think that sends a pretty strong message to the rest of the kids," he says. "We're not afraid to kick anyone out. But we have to get more kids in the stands to recognize that they're not the main attraction at games, that they should show respect for the people on the field and on the sidelines. That's our struggle, to try to change that attitude."

Sun Prairie's cheerleading teams consist of about 75 members, including 11 boys, and it's one of the school's most expensive athletic programs. But with an annual school budget of less than $2,000, the squads raise between $15,000 and $20,000 a year - a number Powers claims must eventually move closer toward $40,000.

What perhaps sets the school apart from others is the coaches' willingness to give many students the opportunity to cheer. The teams that performed at halftime during this season's football games featured girls of varying athletic abilities and dance skills, including some whose weight likely would have gotten them cut from other schools' squads.

Powers credits Sun Prairie's administration with placing the emotional (and sometimes physical) well-being of these girls above school tradition. Nelson also could have simply opted to drop cheerleading entirely, forcing team members to find all-star squads on which to participate. These teams consist of male and female cheerleaders from several different schools who, through the sponsorship of an independent, non-schoolsanctioned organization, compete in regional and national tournaments.

The number of all-star teams in the United States has grown tremendously during the past decade. About 1,000 specialized gyms in the country now train and sponsor these teams, estimates Davis, who remains hopeful that the Sun Prairie situation will improve. "I certainly understand the cheerleaders wanting to take on a different role," she says. "But I would hope the school's administration also does something to get the students behind the cheerleaders."

To that end, Nelson says he and Powers have discussed inviting the school's top competitive cheer squad to participate in an exhibition performance at the school this season, giving students a better understanding of what the school's cheerleaders do.

Still, Powers doubts sideline cheerleading will return to Sun Prairie for quite awhile, if ever. "I don't think the kids are going to want to go back," he says. "If anyone misses us, too bad. I don't mean that in a defiant way. I mean that's really too bad."