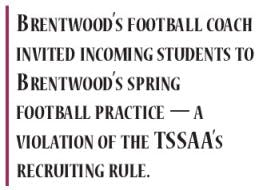 In January, U.S. Federal District Court Judge Todd Campbell ruled that the Tennessee Secondary Schools Athletic Association's recruiting rule, as it applied to Brentwood Academy, violated both the First Amendment right to free speech and the Fourteenth Amendment right to due process. With his decision, Judge Campbell ended a judicial odyssey that lasted more than five years and saw the case go all the way to the U.S. Supreme Court and back.

The case began in 1997, when the TSSAA, a nonprofit athletic association incorporated to regulate interscholastic athletic competition among public and private high schools in Tennessee, received allegations of recruiting violations by Brentwood Academy, a private parochial school and a member of the association. In particular, the allegations claimed that Brentwood's football coach contacted incoming students (each had already contractually agreed to attend Brentwood in the fall) to invite them to Brentwood's spring football practice - a violation of the association's recruiting rule.

Brentwood acknowledged that the coach sent a form letter to all incoming male students in grades 9 and above, informing them of the dates of spring practice and inviting them to participate if interested. But, as school administrators pointed out, the association's recruiting rule allows for incoming students to participate in school activities prior to the time that they actually begin school. In addition, Brentwood argued that prior to receiving the letter, each of the students had already applied for admission, been accepted and entered into a contract to attend the school.

After an inquiry, the association notified Brentwood that it had been found guilty of six recruiting-rules violations. While acknowledging its participation rules, the TSSAA nevertheless found fault with the letter of invitation because it applied an "undue influence" over the recruitment of the athletes.

Brentwood's appeals were rejected, and the TSSAA's Board of Control placed the school on probation for four years, declared its football and boys' basketball teams ineligible to compete in the playoffs or engage in off-season practice for two years, and imposed a $3,000 fine. At the time, all the voting members of the Legislative Council and the Board of Control were public high school administrators. None were principals of independent or parochial schools.

On appeal, the U.S. Sixth Circuit Court of Appeals reversed the District Court, finding no symbiotic relationship between the state and the association. The Sixth Circuit also emphasized that the TSSAA was neither engaging in a traditional and exclusive public function, nor responding to state compulsion.

But the U.S. Supreme Court, in Brentwood Academy v. Tennessee Secondary School Athletic Association [531 U.S. 288 (2001)], using the "entwinement" theory, overturned the Sixth Circuit's decision. The entwinement theory examines the relationship between private organizations and public institutions or public officials. In particular, the theory tries to determine if public officials are so enmeshed in the management and control of an organization that there would be no substantial reason to claim unfairness in applying constitutional standards or treating a private organization like a state actor for constitutional purposes. (See "Up the Academy," July 2001, p. 20.)

As for the second prong of the test, the TSSAA had claimed that Brentwood's spring practice letter and follow-up calls - both because of their content and their being conducted by the head coach - were inappropriate because the students were not yet attending the school. In rejecting this argument, Judge Campbell found that informing the students of spring practice represented "harmless informational speech" about permitted athletic practice to students who already had completed the admissions process and had signed enrollment contracts to attend Brentwood Academy. The letter and telephone calls, the court found, caused no actual harm to the students, parents or any legitimate governmental interests - and were, in fact, consistent with the association's legitimate interests in keeping athletics subordinate to academics.

At the same time, the court noted, the TSSAA failed to prohibit face-to-face communication between public high school coaches and students at "feeder" middle schools, which have a greater potential for undue influence and exploitation than the spring practice letter and calls.

While it is clear that Brentwood II will not have the wide impact of Brentwood I - which logically grouped all 50 state high school athletic associations as state actors for constitutional purposes - the case is still important for the guidance it can provide on recruiting rules. This is especially important with the increasing pressure on high school coaches to win city, state and now national championships (in short, to recruit better athletes).