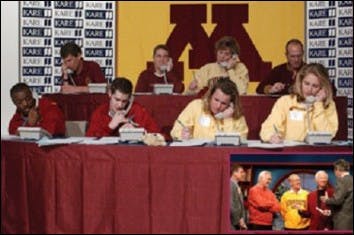 Bob McNamara addressed then-University of Minnesota President Mark Yudof face-to-face in the afternoon. Harvey Mackay summoned Yudof by phone that same night. McNamara and Mackay, both U of M letter winners from the early 1950s, were not taking the breaking news that their alma mater was planning to cut three sports lying down.

"Obviously, you can't accomplish anything unless someone's willing to stand up and be counted," says Mackay, an alum of the men's golf program that with Yudof's April 2002 announcement was suddenly earmarked for extinction. "I'm not a golfer," adds McNamara, an All-American running back for the Gopher football team in 1954. "But I just hated the fact that they would take men's and women's golf and men's gymnastics out of the University of Minnesota."

Neither man is a stranger to philanthropy. Mackay, CEO of Minneapolis-based Mackay Envelope Corp., has been active in fundraising at the local and national levels for 40 years. McNamara, who owns an off-campus sports bar, is credited with leading a scholarship-endowment drive that permanently crossed tennis off the university's endangered sports list.

But even with their collective wealth of experience and connections, the men who would co-chair the so-called Save Gopher Sports campaign found themselves in a tough spot. Yudof was willing to grant the sports a reprieve only if the following goals were met: $900,000 had to be raised by June 2002 (basically one month removed from the announcement), with the balance of the $2.7 million needed to operate the three sports over the next three years accounted for by February 2003 (or roughly nine months out).

The high-stakes melodrama quickly caught the community's attention. "Normally when you do a campaign to renovate a building or endow scholarships, it's a little bit more passive. It's important, but it isn't a headline-grabber," says Mike Halloran, the U of M associate athletic director in charge of development. "This was a front-page deal, and it remained that way throughout. 'Are they going to make it? Will they be saved.' It had a lot of human interest."

So how did Save Gopher Sports - which would raise $2.8 million by the deadline, as well as additional monies in the form of scholarship endowments - capitalize on all that interest? Once the commitment from the university administration was clear, Mackay and McNamara sought a committee of 100 volunteers. "I think we had 55 people at the very first meeting," Mackay says. "We handed them different constituencies. The guys who played golf in the '40s called their peers, the guys from the '50s called their peers, and so on."

The effort had two things going for it from the start: A quarter-million alumni live within a two-hour drive of the university's metropolitan campus, and the Minneapolis TV market ranks among the 20 largest in the country. Both positives would be fully exploited before the campaign's conclusion.

But first, contact with prospective donors was established in many traditional ways: personal visits, phone calls and direct-mail pieces. These alone were successful in generating $1.5 million. But with the Feb. 1 deadline looming less than three months away and Save Gopher Sports still more than $1 million short of its goal, more human interest was needed in a hurry. It came in a nontraditional (at least by intercollegiate athletics standards) fundraising format - a telethon. Held Dec. 15 during three afternoon hours of airtime donated by the local NBC affiliate, KARE, the proceedings included interviews with former Gopher greats and other local dignitaries, as well as live demonstrations at the Mall of America by current members of the men's gymnastics team and appearances by the U of M pep band, mascot and cheerleaders. "Frankly, I looked at it not only as a celebration of Gopher sports, but as one of the best PR moves I've ever seen out of athletics," Halloran says. "I mean, everyone was talking about it. It was a three-hour infomercial."

While exceeding Halloran's expectations - and gaining national attention, to boot - the telethon's $670,000 pledge total still fell short of pushing the campaign over the top. It did, however, succeed in revitalizing volunteers, according to McNamara. "It gave our guys a lot of new energy to go out and hustle," he says, adding that the stretch run was aided by the commitment of a single donor to match all remaining pledges. "I think it awakened the whole community to the fact that there are people out there who really don't want to see this be a second-class university."

In the end, some 1,600 contributors each gave between $5 and several hundred-thousand dollars to Save Gopher Sports, according to Mackay, who emphasized throughout the campaign that only new monies be collected, so as not to undermine the University of Minnesota Foundation's own fundraising efforts. "We would not accept any money from donors if they then were going to cut down their foundation pledge," he says.

In a sense, what the Save Gopher Sports monies are really buying is time. Three years from now, Mackay would rather not pick up the Minneapolis Star Tribune, as he did last April, and "see that ugly headline staring me in the face," he says. "We've saved golf and gymnastics temporarily to where they are again on the same pedestal with all the other sports, and not just on the chopping block. Now we have to save them permanently."

"Our focus now is to endow the scholarships in these sports, as well as our other sports," Halloran says. "We're now in the process of identifying a committee, identifying a goal, putting our plan together and gearing up for a little bit longer-phased campaign. Save Gopher Sports was a sort of gun-to-the-head campaign. We jumped out of the blocks and it was a 100-yard dash. This next campaign is going to be a mile run. We're going to pace ourselves and have a little more time to put a more thoughtful plan in place that will allow us to endow the scholarships, because that's the long-term answer to this."