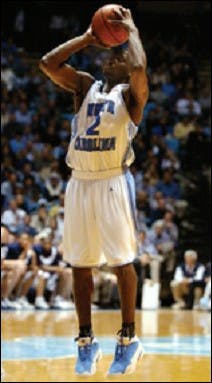 It began in the early 1980s, with Nike courting the endorsement of Georgetown University basketball coach John Thompson. Then a million-dollar deal was struck with Mike Krzyzewski at Duke. Soon all school agreements, through which every team within a given athletic department donned swoosh-bearing shoes and apparel, came into greater vogue than the latest model of Air Jordans. By July 1997, when the University of North Carolina renewed its initial five-year, $4.5 million all-school pact with Nike, for $11.6 million, it seemed everybody was just doing it.

Among shoe-and-apparel companies, Reebok and adidas posed the greatest challenge to Nike, which at one time held agreements of varying complexity with more than 200 colleges and universities. The arch madness reached new heights in fall 1997, when The Arizona Republic reported that opposing shoe contracts may have influenced the search for a men's basketball coach at Arizona State. Apparently, Rick Majerus, the coach at Reebok-affiliated Utah, stood to suffer a dramatic cut in shoe-contract compensation (from at least $500,000, with stock options, to perhaps $125,000, the amount received by departing ASU coach Bill Frieder) were Majerus to defect to ASU, a Nike school at that time. He didn't defect.

Reebok ultimately left Utah, though, along with every one of its partner colleges, after deciding in 2000 to focus solely on professional sports leagues (the NBA and NFL) and marquee pro athletes (Allen Iverson and Venus Williams). Champion, too, has pulled out of the college market. Even Nike has scaled back its campus presence. North Carolina is now one of perhaps a dozen schools whose teams still receive blanket support from Nike, according to Steve Kirschner, UNC's associate athletic director for communications. Nike declined to offer specifics. "Our university partnerships are something we typically don't talk a lot about," says company spokesperson Eric Oberman. "We let our product speak for itself on the field and court."

Truth be told, not many people talk much about shoe-and-apparel contracts anymore, and for several reasons. First, they became so commonplace so quickly that their critics, usually faculty and students, came to accept them, however grudgingly. "It's not news anymore," says Jan Slater, associate professor of advertising at Ohio University, who in 1998 studied the effects of shoe-and-apparel sponsorships at two schools (Xavier and Syracuse). "At that time, remember, there was concern about the infiltration of commercialism in higher education."

Anti-sweatshop sentiment was just as prevalent, but that too cooled down. North Carolina became a late '90s epicenter of the fair-labor debate, but few factions exist in Chapel Hill today, despite the revamping last July of the school's Nike deal to the tune of $28.3 million over eight years. "The sweatshop issue on campus has receded as a barricade-type issue, one in which students were taking over buildings, because the Fair Labor Association and the Worker Rights Consortium are working, I think, quite diligently to address these problems for universities," says Rutledge Tufts, UNC's director of trademarks and licensing. In recent years, Tufts adds, terrorism and war have consumed far more of protesters' energy than shoe-and-apparel sponsorships. "There wasn't nearly the faculty comment on this latest Nike contract that there was earlier," he says.

Why, then, amid this seemingly more receptive climate, have the all-school deals dwindled in number? It's Economics 101, according to Norwood Teague, associate athletic director for marketing and promotions at North Carolina, who also spent time at Virginia (when it was a Reebok school) and Arizona State (just as it had left Nike for adidas). "The economy had been extremely strong, and so was the economic status of shoe-and-apparel companies," Teague says. "But business was changing, and they saw a downturn in business."

By the late '90s, Skechers and Vans replaced Nikes and Reeboks as the footwear of choice among the increasingly powerful skateboarding set. Says Slater, "The athletic contracts give companies a great niche for a certain target - the really sports-minded and athletic people. But for just general wear, Nike isn't that cool anymore."

Maybe not among today's 13-year-old consumers, but among Syracuse University student-athletes in 1998, the swoosh enjoyed a strong foothold. According to Slater's study - to be published later this year by Lawrence Erlbaum Associates as part of Sports Marketing and Consumer Psychology, a compilation of recent sports marketing research - student-athletes expressed much greater allegiance toward Nike than Reebok, which counted Xavier among its affiliate schools at that time. "The way the athletes talked about the Nike brand was much more passionate: 'I want to play pro basketball, and I want to wear Nike shoes.' The Reebok athletes didn't talk that way," says Slater, adding that even student-athletes who were not destined for the pros voiced a desire to work for Nike after graduation, regardless of whether they wore the company's shoes in competition. The same type of disparity in loyalty could be found among both student bodies. "At Syracuse, the majority of students knew it was a Nike school," Slater says. "Those students appreciated and liked buying Nike athletic apparel that said 'Syracuse' on it at the bookstore. The Reebok side didn't see that popularity. At Xavier, students weren't that aware that it was a Reebok school."

One can't fault Reebok for lack of effort. While an associate athletic director at Virginia in 1996, Wood Selig negotiated a five year, $10 million contract with Reebok that he says was representative of the deals of the day. Student-athletes received footwear for competition and conditioning (as many as a half-dozen pairs of game shoes per player, depending on the sport), game uniforms, hotel warmups, and workout and practice apparel. In addition, each athlete had access to an equipment room stocked exclusively with Reebok T-shirts, sweatshirts, socks and shorts.

Coaches, meanwhile, enjoyed access to their own private bank accounts (refreshed annually with up to $5,000, depending on the coach), which could be used to purchase Reebok merchandise for any reason, even family Christmas gifts. "The shoe-and-apparel companies want the visibility and the buy-in at all levels," says Selig, the current athletic director at Western Kentucky. "It's great for them to have the teams locked up, but it's even better to have the highly visible coaches, who are speaking in public or going into the school systems, to be wearing Reebok golf shirts, slacks and hats on their own personal time, so to speak. That's a whale of an endorsement."

Reebok - which like all shoe-and-apparel companies weighed each prospective partner school's TV exposure, as well as the sizes and socioeconomic profiles of the current student body and alumni base - also funded the hiring of two interns within the Virginia athletic department to help market the company's relationship with the university through game-day T-shirt giveaways and statewide retail merchandising opportunities. "They didn't leave it to chance that we were going to get out there and do it; they gave us the money to hire people to make sure that they were able to leverage their investment," Selig says.

Such a "sweetheart deal," as Selig still describes it, may be a thing of the past at Virginia, which now pursues separate shoe-and-apparel contracts per individual sport. It's absolutely out of the question for Western Kentucky, which competes one level below the big time in Division I-AA. "We can't sniff anything like that. The way Division I-AA works is you wear whatever you can get ahold of," says Selig, whose football program in December won a national championship in cleats handed down from NFL teams. The team's success has prompted WKU to at least seek a single vendor for all football uniforms, shoes and sideline apparel this season. "We're still going to write checks as opposed to receive checks, but at least our money's going to stretch a lot further," Selig says.

Will the checks always be there for elite athletic departments? Gary Wyant, associate athletic director at the University of Tennessee, certainly hopes so. As one of the six schools currently under contract with adidas, Tennessee receives everything from sports bras to batting gloves, not to mention custom-made shoes for athletes with foot problems. But that contract expires June 30, 2005. By state law, the university will request new bids and hope there are still bidders who view all-school deals as advantageous. Otherwise, "it would leave us in hard times, if we had to go back and start purchasing the gear that they've been providing us," Wyant says.

"I think the value is still there for the brands," says Slater. "With media costs rising and the fragmentation of audiences, it's so hard to reach people through the mass media. It's a brilliant advertising strategy to get a logo out in that sort of environment that many times."

Adidas, for one, will still be seen around campus. "Absolutely," says Anna Quarrell, the company's public relations manager. "The all-school agreements allow us to combine our passion for sports and our ability to create products that enhance athletic performance. We'll never stop trying to help athletes reach their peak performance - no matter where, when and how they play."

Well, at least as long as they play at one of a half-dozen schools with the marketing power of a Tennessee.