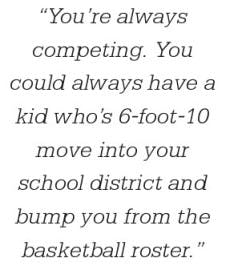 The cliché takes many forms, all describing the dangers of setting a precedent: It's a slippery slope, a Pandora's box, a can of worms. Give 'em an inch? They'll take a mile.

If waivers of transfer regulations were for some high school sports administrators the inch, "school choice" is the mile. In an increasing number of urban multiple-school districts and states, the advent of school choice is butting heads with a notion that one day may seem as quaint as James Naismith's peach basket: the belief that athletics should not be the motivation for student-athletes to change high schools.

"It's hard for a lot of us to visualize a situation where high school athletes are like college athletes, selecting their programs and coaches and maybe getting recruited by alumni," says Frank McCormick, an associate director of the Wisconsin Interscholastic Athletic Association. "I sure hope I'm retired before we start seeing that."

In most states, the process of making exceptions to transfer rules has been gradual, and inexorable. For example, Kansas began with a rule that made transferring students athletically ineligible for 18 school weeks, unless it could be proved that a student's family had made a bona fide move. "Over time," says Gary Musselman, executive director of the Kansas State High School Activities Association, "as our schools began to see a number of situations where kids were being forced to change homes through circumstances beyond their control, we began to allow a hardship waiver of eligibility, granting immediate, unrestricted eligibility at whatever level of competition students' skills would allow, athletic or otherwise."

Eventually, circumstances demanded another kind of waiver, the limited eligibility waiver, for non-hardship situations. In these cases, the KSHSAA can grant limited (junior varsity) eligibility for students who took part in a particular activity at their former school during the preceding 12 months, and full eligibility for students who transfer and then want to try a new activity. Musselman notes that some school administrators balked at this further weakening of the transfer rule, but after assuring constituents that the KSHSAA did indeed worry about people trying to beat the system, he was able to point to the limitations of the new waiver as disincentives against cheating. "I think it's been more good than bad that we gave kids that opportunity," Musselman says.

In the Lone Star State, the Texas University Interscholastic League carries a full-time waiver officer, Sam Harper, who has presided over an unprecedented explosion of waiver requests. Between 1989 and 1993, the UIL processed 988 applications; between 1995 and 1998, the total was 4,400.

"It wasn't many years ago that there wasn't a waiver process," says Harper. "It wasn't until 1981 that we granted a little relief to a senior athlete who moved with his parents from one school to another. Prior to that, he'd have been out of luck." The process helped so many seniors that by the next year the waiver opportunity had been extended to underclassmen.

"There was some worry that they were opening up a can of worms, but the good it created far outweighed any kind of negative outcome that might have occurred," Harper says. "There were still people who tried to use the rules to gain an advantage, but that's what I'm here for."

States where school choice has become a reality may have a reputation as playgrounds of wholesale free agency, but that's not universally true. In Wisconsin, where the long-established 220 Program in the southeastern part of the state gave way to statewide school choice last year, administrators still hold fast to transfer regulations that might seem redundant in the new world order. The Milwaukee school system, birthplace of the school choice movement, has a rule that if a student transfers after the third Friday of his or her high school year, he or she is ineligible for one year from the date of transfer. May students appeal the rule. "I've had one hearing," says Janis Doleschal, Milwaukee Public Schools' commissioner of interscholastic activities and academics, "and I'm at the point where, even if they want to appeal, I'm saying forget it."

Nor is the WIAA willing to give up on its transfer rules, which are actually more strict than those in many states. Says McCormick, "The residence rule will never go away, because I suspect that our schools wouldn't tolerate it. We get a lot of calls about a coach loading up his team with transfers and upsetting the balance in a conference. Oh yeah, we sure do hear about those things."

If anything, McCormick says, school choice is leading many school districts to add transfer regulations, not subtract them.

"In multiple-school districts like Milwaukee, those people have to have those kinds of rules," he says. "They quickly find that if they don't, they're going to have the same kinds of abuses or perceived abuses that we would have if we didn't have a residence rule throughout the state."

Colorado might be the one exception, a state where transferring students retain their eligibility in most cases and where transfer rules are gradually becoming extinct.

"We can see it happening," says Bert Borgmann, an assistant commissioner with the Colorado High School Activities Association. "We still get maybe 30 to 40 hardship waiver requests a year, but certainly not as many as we used to. We used to get 200 to 300 a year; now it's down to the point where we know the kids by name."

It might seem incredible that any Colorado students need to seek a waiver, given the liberal policy enacted five years ago by the state legislature. In essence (there are a few exceptions), the law states that if a student elects to transfer at the beginning of a school year without an accompanying move by his or her parents, as long as the student was academically eligible at his or her previous school, he or she is eligible to participate in extracurricular activities at the new school. If a student transfers mid-year and has played a particular sport at the previous school, he or she is restricted to junior varsity competition for the remainder of that year. A second state law allows students to participate in programs at other schools without transferring if their particular school doesn't offer the program in question.

Although the transfer law was not popular with administrators when it passed, opposition to the law has never jelled, and the hue and cry that the CHSAA expected from the parents of children displaced by athletes transferring in hasn't materialized. Borgmann believes people have simply gotten used to the idea. "You're always competing," he says. "You could always have a kid who's 6-foot-10 move into your school district and bump you from the basketball roster." On the other hand, Borgmann says, a number of high-profile transfers could have elicited outrage - and didn't.

"We had a case two years ago where a young lady who was the starting point guard at a school in the north end of Denver transferred, without a move by her parents, to a school on the southwest side of Denver, and she drove 50 miles every day to go to school," says Borgmann. "It paid off for her, too - her team has won two state championships since. It caused the girl who had been the point guard there to transfer to another school, and she won her first state championship this March." Borgmann pauses. "It has been bizarre."

It could have been worse. Colorado legislators wanted complete freedom of movement, where a football player could finish his season in November and transfer to another school in time for the basketball season. The CHSAA was able to convince legislators of the educational value of staying at one school for an entire year. "When we were allowed to at least add some of the educational components to the transfer rule, it became a very workable situation," Borgmann says.

Colorado has since become the object of derision among many administrators who consider athletically motivated transfers heresy. Borgmann says, "They're trying to hold fast to some of those things, but we are in a changing world, and we do serve a public as well as our member schools." It's a comment that conveys an increasing recognition, especially among younger administrators, that the move toward greater freedom is inevitable - and even positive.

"We're a mobile society, we're a fractured-family society, and I think our schools have realized over the last decade or so that kids sometimes are the victims of circumstance," says Musselman. "And since we all know that extracurricular activities are the best at-risk program we have, we err on the side of trying to make eligibility available to the kids rather than saying no. Our mindset from the outset is, 'How can we help make kids eligible within the rules?' The other half of the equation is that you're trying to preserve the integrity of what eligibility is, a privilege earned by kids who have done the work academically, whose families have lived and played within the rules. Trying to find that workable middle is what makes it interesting."