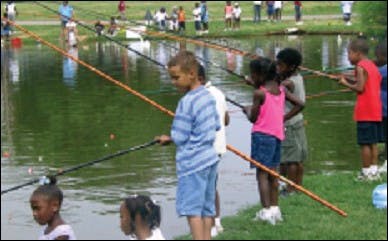 This winter, the Arkansas Game and Fish Commission hopes to spark renewed interest in fishing by keeping several bodies of water in Little Rock, Ark., stocked with trout and building docks to allow shore access for residents with disabilities. Credit those amenities to the commission's Urban and Community Fishing Program partnership with Little Rock Parks and Recreation, designed to provide fishing opportunities for - and to boost environmental awareness among - metropolitan residents. Now approaching the end of its first full year, the program by all accounts has been hugely successful, with surges in fishing-license purchases in Little Rock and Pine Bluff (where a similar program is in place).

"It was a response to declines in fishing-license sales and fishing in general," says Clifton Jackson, the commission's Urban and Community Fishing Program biologist. Surveys performed by the commission indicated, on one hand, a lack of time as a reason for not fishing and, on the other, the desire to spend time with family and friends as an incentive to fish. The commission, therefore, saw the potential for a natural partnership with parks and recreation departments, since their programming already adheres to a family-oriented philosophy.

The relationship with Little Rock Parks and Recreation is working out so well that Jackson says he hopes to add more parks and recreation partners this winter.

Last May, Little Rock Parks and Recreation and the AGFC sponsored a fishing clinic that attracted about 2,000 children and launched a summerlong campaign during which the commission stocked almost a dozen of the city's ponds and small lakes with catfish every two weeks. Various neighborhoods also held smaller fishing clinics throughout the summer.

"On the surface, this is about getting people to fish," says Bryan Day, director of Little Rock Parks and Recreation. "But it's a much deeper relationship than that." Day's department is taking advantage of that relationship by expanding its user base and reaping the benefits of the commission's expertise on numerous environmental issues - from controlling one park's overpopulation of deer to helping solve a water quality-control problem in a local pond. "It's a good fit," Day says.

In select cities, the Illinois Department of Natural Resources runs free two-and-a-half-hour children's fishing clinics twice a day, Monday through Friday, for nine weeks during the summer. Participants register through local parks and recreation departments and spend half the session learning about safety and how to tie hooks. The other half is spent fishing in a well-stocked pond. More than 30,000 children attended one of 1,453 such clinics held in the summer of 2002, according to the Illinois DNR. And although fewer communities were involved this year because of budget constraints, the program remains vital to enhancing local outdoor recreation opportunities among young people and their parents.

"It's an education and awareness thing," says Herb Dreier, Central Illinois Urban Fishing Program coordinator for the state's DNR. "Along with fishing, we teach kids about what makes a good ecosystem and what makes a bad ecosystem. That way, they can become adults who are knowledgeable about the environment."

Just like the Little Rock trout fisherman who, during the Urban and Community Fishing Program's pilot season in Arkansas last winter, reported a broken sewer pipe in the watershed of a local creek. That problem, according to Jackson, likely would have otherwise gone undetected until spring. "People notice things like that now," he says.