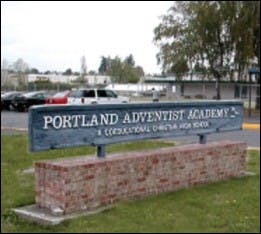 In 1996, the Oregon School Activities Association adjusted the schedule of the boys' Class 2A basketball tournament games in an effort to avoid a potential conflict with one of its member schools. The OSAA made the changes after Portland Adventist Academy (PAA), a private Seventh Day Adventist school, notified the association that for religious reasons it was unable to participate in competitive activities during the Biblical Sabbath, which extends from sundown Friday through sundown Saturday.

The OSAA was able to accommodate the school by altering the slate of Friday games, which it felt were relatively interchangeable. The OSAA informed school administrators that it could not adjust the schedule of the Saturday games, however, because those games followed a set order, with the championship game coming last. If the school qualified for a Saturday game that conflicted with its Sabbath and refused to play, it would have to forfeit the game, according to the OSAA. As things turned out, PAA, which went on to qualify for and win the championship game, did not have to forfeit any games because the championship did not begin until after sundown on Saturday.

After receiving numerous complaints from other schools about its agreement with PAA, the OSAA changed its policies the following year. The new policies prohibited a team or an individual player from entering a tournament with the intention of withdrawing from or forfeiting a game before the tournament's conclusion.

In 2000, Portland Adventist Academy once again qualified for the state basketball tournament. In an attempt to play in the tournament, some basketball players and their parents asked the OSAA to accommodate their religious practices in scheduling that year's tournament. The OSAA declined, after which the student-athletes appealed to the state board of education, claiming that the OSAA's refusal to accommodate their religious practices was discriminatory and in violation of Oregon state law. Oregon law defines discrimination as "any act that unreasonably differentiates treatment, intended or unintended, or any act that is fair in form but discriminatory in operation, either of which is based on age, disability, national origin, race, marital status, religion or sex."

In its review of the student-athletes' claims, the board concluded that the OSAA's policy in scheduling tournament games was neutral with regard to religion. In reaching this decision, the board found that while the association will modify schedules for its own benefit - for the sake of a broadcaster's wishes, due to a facility availability snafu or as a result of inclement weather - such changes are not based on students' secular or religious needs.

After their appeal was rejected by the board of education, the student-athletes took their challenge to the courts. In Montgomery v. Board of Education and Oregon School Activities Association [2003 Ore. App. LEXIS 672], the Court of Appeals of Oregon was asked to determine whether Oregon statute ORS 659.850 required the OSAA to accommodate the religious beliefs and practices of the school and its students. In addition, PAA students charged that the decisions of the OSAA and the board of education not to adjust the Class 2A boys' basketball tournament were unreasonably discriminatory.

The state law in question prohibits discrimination based on religion, meaning that the OSAA cannot use a student's religion as a basis for discriminating against the student's participation in the activities that it sponsors. To that extent, the prohibition is comparable to the other statutory prohibitions against discrimination based on such things as race or national origin. These are all characteristics that do not affect a person's ability to participate in an activity, and using them as a basis for making distinctions would clearly be disparate-treatment discrimination.

However, certain religious obligations - days or times of observance, food or clothing - do sometimes come into conflict with secular arrangements and expectations. Thus, a person's religion may directly affect his or her ability to participate in the OSAA's activities in ways that race and national origin do not. A policy that is neutral in its form, in other words, can have a direct impact on someone if that person's religious obligations come into conflict with the policy. For example, in some circumstances a seemingly neutral policy can force a person to choose between following his or her religious obligations or participating in the activity.

Therefore, the court held that the real question in the case was whether ORS 659.850 imposed a positive duty on the OSAA to make reasonable accommodation to the student-athletes' religious needs. The board of education never addressed this issue - since it found that the OSAA did not differentiate based on religion, it deemed it unnecessary to decide whether any differentiation was reasonable. (The board did consider the students' argument that the policy was unreasonable, but did so in the context of the reasonableness of the OSAA's alleged disparate treatment, not of the disparate impact of the OSAA's policies.)

During the trial before the Court of Appeals, the OSAA and the board argued that it was reasonable for the OSAA to refuse the school's request, because rescheduling a game only when it served the OSAA's interests showed no favoritism to any group or individual and thus was not discriminatory. In addition, the OSAA and the board argued that requiring the OSAA to accommodate the students' religious obligations would constitute religious discrimination against the other participants in the tournament.

In rejecting this argument, the court held that a reasonable accommodation of religious obligations would mean neither that the OSAA was endorsing the students' religious views nor that the association was discriminating against the other students on religious grounds. In fact, the court held that there was no suggestion in the record that any proposed accommodation might cause a conflict with another participant's religious obligations.

In addition, the court noted that the Oregon Legislature expressly extended the notion of prohibited discrimination to include both actions that unreasonably differentiate between individuals and actions that are "fair in form but discriminatory in operation." Accordingly, for the OSAA to require a person to choose between a religious obligation and participation in a covered activity - without first attempting to find a reasonable accommodation for the conflict - would be to act in this discriminatory manner.

As for the board's decision that the OSAA had not committed disparate-treatment discrimination, the court held that the board never considered whether the OSAA's actions, although fair in form, were discriminatory in effect. Since the board never examined the question of whether the OSAA could reasonably accommodate the students, the court concluded that the issue must go back before the board of education. It will now be up to the board to determine whether there was any reasonable accommodation that the OSAA might have made to the students of Portland Adventist Academy.

While only a state court decision, and therefore not legally binding on other courts outside of Oregon, the court's decision should be followed closely by every state, for a number or reasons. First, as the Court of Appeals noted, at the time the Oregon Legislature adopted the definition of discrimination, the state based the concept of discrimination on those used under federal law, which require a reasonable accommodation to religious practices. In addition, in reaching its decision, the court relied heavily on the extensive federal law concerning what kinds of accommodations are reasonable and unreasonable.

Finally, because most states have also adopted legislation based on the federal definitions of discrimination and reasonable accommodation, it is going to be essential for state athletic associations to at least attempt to accommodate the religious practices of students and the associations' member schools.