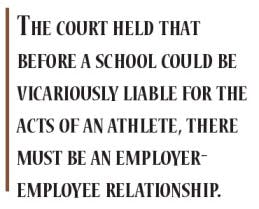 It is well settled that under some circumstances, an owner of a professional sports team can be vicariously liable for the torts committed by one of his or her athletes. The most famous example of this principle is Tomjanovich v. California Sports Incorporated, d/b/a Los Angeles Lakers [1979 U.S. Dist. LEXIS 9282]. In that case, Rudy Tomjanovich, a member of the Houston Rockets basketball team, was trying to break up a fight between two other players when he was punched in the face by Kermit Washington, a member of the Los Angeles Lakers. As a result of the assault, Tomjanovich sued the Lakers under the theory of vicarious liability and won a jury verdict of more than $3 million.

Under the theory of vicarious liability (or respondeat superior, as it is sometimes called), an employer is vicariously liable for torts committed within the scope their workers' employment. It should be noted that most intentional torts (such as battery) committed by an employee are usually outside the scope of his or her employment. The court, however, ruled that Washington was out on the floor to be physical. Therefore, it was not unreasonably foreseeable that he would elevate his conduct and hit someone.

While it is clear that vicarious liability works at the professional level, there has been some debate as to whether it should apply at the college level, as well. That was just one of the issues facing the Supreme Judicial Court of Massachusetts in Kavanagh v. Trustees of Boston University [2003 Mass. LEXIS 643].

Kenneth Kavanagh was a member of the Manhattan College men's basketball team. During the second half of a game at Boston University, several players who were contesting a rebound began throwing elbows and shoving each other. After the referee blew his whistle to signal a foul, Kavanagh attempted to break up a developing scuffle between two players and was punched in the nose by Levar Folk, a BU player.

Folk was immediately ejected from the game and suspended from the following game. No other penalty or discipline was imposed on the team, or on BU's coach, Dennis Wolff. When Wolff talked to Folk about the incident sometime after the game, Folk's explanation for his misconduct was that he "lost it." Kavanagh was treated for what turned out to be a broken nose and returned to play later in the same game.

As a result of his injuries, Kavanagh sued both Boston University and Wolff. Kavanagh's first argument was that because of Folk's status as a scholarship athlete, he was an agent of Boston University - and, therefore, the school was vicariously liable for any torts he committed while playing for the basketball team.

In reviewing this argument, the court held that before a school could be vicariously liable for the acts of an athlete, there must be an employer-employee relationship. In holding that scholarships may introduce some element of "payment" into the relationship between an athlete and his or her school, the court refused to equate scholarships with wages. Instead, the court ruled that scholarships merely pay specific forms of expenses that the student would incur in attending school (tuition, books, room and board), and thereby essentially provide the student with only an education. Therefore, the fact that a college or university provides an athlete a scholarship or other financial assistance to attend the school does not transform the relationship between the school and the athlete into any form of employment relationship.

While the court noted that it is undeniable that a successful athletic program, particularly in popular sports like basketball, can garner substantial revenues for colleges and universities, it held that the amount of money involved in college sports does not transform athletes into employees.

Kavanagh's second argument was that even if BU was not vicariously liable for the torts of its athletes, it was still liable for failing to protect him from the criminal conduct of a third party. While acknowledging that the general rule in such cases is that there is no duty to protect another from the criminal conduct of a third party, Kavanagh claimed that a duty arises when there is a special relationship - as there was in this case, since he was an athlete on an opposing team.

In recent years, numerous courts have taken differing views as to what duties schools owe to the scholarship athletes they recruit. For example, some states have determined that schools should be deemed to have a "special relationship" with their own scholarship athletes and a corresponding duty to protect those athletes from injury. Reasons include the unequal bargaining power in the recruitment process, the degree of influence that a school and its coaches have over an athlete's daily life, the pressures placed on athletes to win and the enormous sums of money schools now reap from their successful teams. (See Kleinknecht v. Gettysburg College [989 F.2d 1360, 1366-1369 (3d Cir. 1993)] and Davidson v. University of N.C. at Chapel Hill [142 N.C. App. 544, 554557, 543 S.E.2d 920 (2001)]).

The court in Kavanagh never even considered the issue, however, because none of the authorities favoring such a "special relationship" has opined that that relationship extends to athletes from other schools. In the present case, BU did not recruit Kavanagh, Kavanagh did not depend on BU for any benefit, and BU did not exert any form of control or influence over Kavanagh or affect his ability to protect himself. In short, Kavanagh had no relationship with the university, special or otherwise, and the only school that would have any duty toward him was his own school, Manhattan College.

The court also held that Kavanagh's negligence claim was doomed to failure because any duty to protect him from criminal harm extends only to those acts that are reasonably foreseeable. The court ruled that foreseeability, however, must mean something more than awareness of the ever-present possibility that an athlete may become overly excited and engage in physical contact beyond the precise boundaries of acceptably aggressive play. Therefore, the court held that Kavanagh would have to show that BU had specific information about Folk suggesting a propensity to engage in violent conduct, or some warning that he appeared headed toward such conduct as the game progressed.

Since Kavanagh presented no such evidence, the court found that neither BU nor Wolff had any reason to foresee that Folk would engage in violent behavior. He had never done so before, he had no history suggestive of potential violence on or off the basketball court, and nothing in his conduct during the earlier part of the game provided any warning that Folk would engage in a violent outburst.

Kavanagh's final argument was that the punch was incited by Wolff's own aggressive coaching. Which effectively pushed Folk beyond the boundaries of aggressive physical play into criminal violence. The court quickly rejected this argument, and ruled that nothing in the record or facts of the case showed that Wolff instructed or expressly encouraged Folk to hit an opposing player. In addition, the court went on to hold, just as players are entitled to play aggressively without fear of liability, a coach properly may encourage players to play aggressively. Indeed, a coach's ability to inspire players to compete aggressively is one of a coach's important attributes. The possibility that some players might overreact to such inspiration or encouragement should not, by itself, suffice to impose liability on a coach. Just as with the players, the court was not willing to impose liability on a coach's behavior unless it amounted to recklessness.

This case is important for colleges and universities for two reasons. First, although the court may have underestimated the amount of time athletes have to devote to their sports and overestimated the amount of education most Division I basketball players actually receive at school, it clearly ruled that college scholarship athletes are not employees of their schools. This means that schools are not only exempt from vicarious liability cases like Kavanagh's, but also workers' compensation cases.

Second, the decision also makes it very clear that colleges and universities do not owe visiting athletes any duty to protect them from the criminal acts of others unless the acts are reasonably foreseeable. Therefore, unless a visiting athlete can show that the institution had specific information that a player posed a danger to another or had a propensity to engage in violent conduct, he or she will never be able to hold the host school liable for his or her injuries.