A standardized athletic test for football players strives for objectivity within the recruiting process. 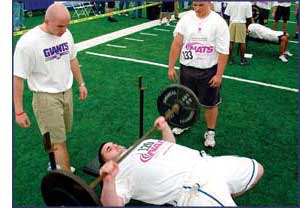 Photo of a student bench-press testingOn Memorial Day weekend, 100 football players from more than 30 Colorado and Nebraska high schools gathered at Denver's Paul D. Bowlen Memorial Broncos Centre to participate in one of the nation's first standardized athletic tests for prep athletes. The half-day NFL-style program included the 40-yard dash, the three-cone agility drill, the broad jump and bench-press reps. Except for the rattle of weight plates and other occasional noises, the morning and afternoon sessions were conducted in silence. No obnoxious parents. No overanxious coaches. No outside distractions.

"It was a picture of concentration," says Stephen Austin, president and architect of the program, which is officially called the National Athletic Testing System -- a partnership between the Waco, Texas-based American Football Coaches Association and state high school coaches associations around the country. But you can call it a combine with a conscience, an aptitude test for athletes.

All NATS tests are conducted exactly alike with a uniform grading formula, so -- just like the Scholastic Aptitude Test -- scores can be compared regardless of where tests were conducted. That allows student-athletes as young as freshmen in, say, Maine to be tested and have their results interpreted in precisely the same manner as those in California. The universal $55 fee per participant gives players access to interactive web-based tools that help them track their physical development and academic progress throughout their high school career. All data is available free of charge to every college football coach in the country. And because NATS is an independent, nonprofit entity, no outside interests hold any influence over the results.

"Believe it or not, at this late date, there is not an active standardized testing system in the United States," Austin says. "That shocks me. The key phrase here is 'uniform standards,' because that enables data to be compared. Ninety percent of combines up until now have been operated as marketing tools for the companies that run them. The SAT has no vested interest in the individual's results. Neither does NATS."

In addition to standardized physical testing, NATS also offers a strong academic element that includes a "core course calculator," which allows student-athletes to make sure they are meeting NCAA Clearinghouse Initial-Eligibility standards. To emphasize the program's commitment to academics, the May 22 NATS test at the New York Giants practice bubble included an SAT-preparation seminar held for players and their parents in one of Giants Stadium's VIP areas.

Although pilot tests in six states were conducted in 2004, NATS officially launched in May at eight sites in six states -- Colorado, Illinois, Indiana, Maryland, Nevada and New Jersey. Drills that determined a player's ability were held at pro and collegiate facilities, part of an endorsement by USA Football, the advocacy group founded by the National Football League and the NFL Players Association. "It's a no-brainer for the NFL teams because they all have community outreach and marketing programs," Austin says.

"The move toward standardization was the right thing to do," says Tim Dougherty, athletic director and head football coach at Edwardsville (Ill.) High School and vice chairman of the NATS Board of Review. "I saw what was happening to the recruiting landscape across the country. It was starting to fall into the hands of recruiting services that may not have the best interests of student-athletes at heart. Hopefully we can -- to use drastic terms -- retain the purity of the high school athlete who is being recruited."

Players from Missouri and Kentucky were among the 300 or so participants at two Illinois test sites, one hosted by the St. Louis Rams and the other by Elmhurst College. "Our vision is that there will be locations throughout the country where kids can attend based on which test sites are closest to them," Dougherty says.

That's good news for football players in northern Nevada who historically have struggled to get college recruiters to visit that part of the state. "We needed to increase the exposure of our kids," says Rollins Stallworth, head football coach and dean of students at Hug High School in Reno and president of the Northern Nevada Football Coaches Association. To that end, the NNFCA began running its own combine, based on philosophies similar to the NATS test, in 1998. Nevada thus made for an ideal NATS pilot state -- especially considering that player data gleaned from the NNFCA combines was posted only on a locally operated web site. "We had all this great data on the kids, but we really didn't know what to do with it," Stallworth says.

Colorado, on the other hand, didn't sponsor its own combine and had no plans to do so until NATS came along. "I didn't particularly want to be in the combine business, and we'd turned down local ones before," says Jack Meehan, executive director of the Colorado High School Coaches' Association. "But our coaches really liked the idea of national standardization. They were tired of the multiple combines and the different ways each combine operates. Our society is so test-minded nowadays that they wanted something that was a little more solid."

Many observers suspect that NATS won't force the shutdown of popular marketing-oriented combines. Rather, those combines will likely morph into programs for only the nation's most-elite high school football players. Performance-enhancement facilities that already do a swift business prepping kids for combines should also see a spike in business. "This is the best thing to ever happen to them," Austin says. "Look at how much money the companies that provide SAT preparation tools make."

Despite all the rah-rah rhetoric surrounding NATS, the program must still high-step over a few stumbling blocks. In Illinois, for example, Dougherty was hoping coaches would show more interest in NATS. "I thought the coaches would take some time to find out more," he says. "I know we're all busy, but I'm really disappointed that some haven't invested a few minutes of their time to look into this."

Officials with the Georgia Athletic Coaches Association, which participated in last year's pilot program, opted to revert to their own combine system for 2005, and executives at other state coaches associations reportedly won't participate until the $55 fee is eliminated -- which isn't likely. Nevertheless, "we have more work than we can handle," Austin says. Almost 1,260 players, mostly juniors and seniors, participated in this year's eight NATS tests, and at least 15 states are in line. The goal is to offer NATS tests in all 50 states by 2008.

To help reduce program costs, NATS recently received a grant from the NFL Youth Football Fund to help administer the program in individual states, and there are efforts under way to develop scholarships and other funding mechanisms for players who may not be able to afford the fee.

While Austin stresses that NATS wasn't created as a program to "sell" to other sports, the crossover potential is huge. The biggest challenges in applying the NATS test to other sports are generating operational funds and garnering support from states and governing bodies -- which NATS has managed to accomplish. "I certainly see potential for other sports," says Darryl Miller, district athletic trainer for Denver Public Schools and a USA Wrestling trainer who also attended the NATS testing at the Broncos training facility. "Each sport would have its own unique pieces to the test. For wrestling, it might be an anaerobic piece in which athletes spin on a bike all-out for one minute instead of the 40-yard dash they use for football."

"When I came up with the name, I didn't use the word 'football,' " Austin says. "Recruiters for any sport want contact information, academic information and details about baseline athletic ability. This takes so much work off the desk of high school coaches who usually have to fill out those forms for recruiters. Now that's all done for them."