Restructured out of his tenured position, an athletic director sues and loses. 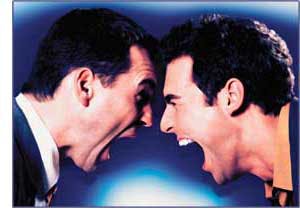 Photo of men arguingIt is not at all uncommon for individuals without coaching certificates, physical education degrees or other similar qualifications to become athletic directors or coaches within their local school districts. This is especially true in districts where these positions are considered to be outside the regular physical education teacher's job duties. As such, the positions come with extra money, and other individuals teaching in the school district who are looking to supplement their incomes are usually willing to accept the added responsibilities.

It is also not unusual, in any circumstance, for disputes to arise between coaches, athletic directors and their local school boards. However, situations in which part-time staff members are involved can be more delicate. An example is Cioffi v. Averill Park Central School District [2004 U.S. Dist. LEXIS 19620]. Louis Cioffi started his career with the Averill Park, N.Y., school district as a part-time social studies teacher and part-time athletic director. In June 1999, the school district promoted Cioffi to a full-time, tenured administrative position, athletic director and director of physical education.

During the time Cioffi worked in the district, Kevin Earl was employed there as the high school's physical education teacher and head varsity football coach. The relationship between Cioffi and Earl was acrimonious from the beginning, with Cioffi continuously complaining about how Earl ran the football program, saying that the program was out of control. Michael Johnson, who was superintendent of schools at the time, took a direct role in mediating the relationship between Cioffi and Earl. In particular, Johnson changed Earl's teaching assignment from the high school to the middle school so he would have less contact with Cioffi, and at the same time directed Cioffi to treat Earl fairly.

During the summer of 2000, Cioffi's criticism of Earl became public, and he recommended that Earl not be reappointed head football coach. However, the school board rejected his recommendation, and Earl was reappointed.

In the fall of 2000, it was discovered that Cioffi lacked the required certification to hold the position of director of physical education. When he was asked to obtain the certification by Johnson, Cioffi claimed that he was unable to do so because of lingering physical effects from an electric shock he had received the previous year. The school board, therefore, was forced to make special arrangements in order for Cioffi to remain in the full-time administrative position of athletic director.

A year later, it became known that a hazing incident involving the football team had occurred in the high school locker room, after which Cioffi sent a letter to Johnson and the school board claiming no personal responsibility for the hazing. In addition, in a move that angered Johnson and other members of the board, Cioffi alleged in the letter that the board was covering up the incident to protect Earl.

Finally, in 2002, the school board decided to reorganize some administrative positions in order to save money, despite the fact that there was no real fiscal crisis. As part of the reorganization, it was decided to abolish the athletic director position effective June 2002 and create a combined director of physical education/assistant principal position. Since Cioffi did not have the required physical education certificate, he was unable to apply for this new position.

Was Cioffi's speech constitutionally protected? For the speech of a public employee to be protected under the First Amendment, the court reasoned, it must involve a matter of public concern. In reviewing the facts, the court found that other than general complaints he made about Earl over the years, Cioffi alleged only two specific incidents of protected speech. With regard to Cioffi's general complaints about Earl, the court found that these were employment matters between a supervisor and his subordinate. Such personal workplace grievances, the court held, are not protected.

Even if such speech were considered a matter of public concern, the court held that there was no causal connection established between Cioffi's complaints, which occurred over nearly a decade, and the eventual abolition of the plaintiff's position. This lack of a causal connection is particularly apparent in light of Cioffi's promotion to a full-time tenured administrative position in 1999 and his retention of that position in the fall of 2000, despite lacking the required physical education certificate.

As for the two specific incidents of speech Cioffi claims were protected, the court found that both, likewise, were employment matters and therefore not protected. For example, since Cioffi was the athletic director at the time of the hazing, the court found that supervision of the action or inaction of athletic coaches (as suggested by his letter to the school board) would be part of his employment duties. With regard to the second incident -- the press conference called by Cioffi in response to hearing that the school board intended to abolish his position -- the court found this to be simply a last-ditch effort to save his job, and clearly an employment matter.

Cioffi's due-process and conspiracy claims were similarly unsuccessful. The school district followed the correct procedures, the court held, under New York law. While the court noted the possibility of a due-process violation occurring in such circumstances, in this case Cioffi was not qualified for the new position of director of physical education/assistant principal even if it was considered similar to the athletic director position, since he did not have the proper certification. With regard to the conspiracy claim, the court held that there could be no conspiracy between the school district and its officers, employees and board of education members because they are considered a single entity.

Although the court concluded that Cioffi's speech did not rise to the level of protected speech, the case is still important for a couple of reasons. First, even in the best situation, personal conflicts involving the duties and responsibilities of coaches and athletic director are common. Therefore, in order to reduce some of these conflicts, it is essential that each position have a clearly written job description defining the duties and responsibilities of each position. Next, since conflicts are inevitable, it is also essential for school districts to establish and follow procedures for disciplining and removing coaches and/or administrators. Without such procedures, school districts are exposing themselves to liability for wrongful termination or other employment claims.