Cycling programs take off in at least three states. 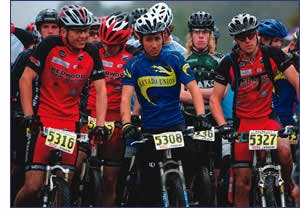 "Thanks to Lance Armstrong, the past six years have been huge in getting mainstream America to recognize the sport," says Matt Fritzinger, founder and director of the four-year-old Northern California High School Mountain Bike League (NorCal), considered by many to be the country's leading cycling program for high school students. "I think it's wrong that cycling has been around for longer than most of the sports being played in high school, yet it's only now becoming a high school sport."

Progress has been slow but steady, as fledgling mountain-bike and road-racing programs in a few states are gradually picking up speed. In California, at least two other groups are trying to follow NorCal's lead, and a statewide cycling league in Pennsylvania is now in its second year. The Colorado High School Mountain Bike League, meanwhile, will kick off its first season this fall, five years after the formation of an independent state championship that succeeded despite the absence of an official league.

The National Federation of State High School Associations does not recognize cycling as an official sport, nor do any individual state associations. But that hasn't stopped Alabama, Arizona, Kentucky, New Mexico, Oregon, Tennessee, Vermont and West Virginia from independently hosting at least one high school state cycling championship each since 2000, according to Steve McCauley, director of development for USA Cycling's Development Foundation, the fund-raising arm of the Colorado Springs, Colo.-based governing body.

In fact, USA Cycling has thrown its support behind those states and others by encouraging kids to get on their bikes and ride. "We looked at cross-country running and said, 'This is so similar to mountain-bike racing.' It made sense for us to just copy it and develop team mountain-bike racing at the high school and middle school levels," McCauley says. USA Cycling's off-road-racing rulebook now includes guidelines for team competition at those levels.

Should interscholastic cycling catch on, it could give a boost to collegiate cycling, which has been evolving over the past 15 years. Today, more than 250 colleges and universities are represented by approximately 4,000 cyclists -- most of them members of club teams, although a few varsity teams exist -- and about 300 racers each compete in national road-racing and mountain-biking championships every year. "We're nowhere close to the tipping point of 50 varsity teams for the NCAA to look seriously at cycling as a sport to adopt," McCauley says. "But collegiate cycling is definitely benefiting from kids popping out of leagues like NorCal."

Fritzinger, a math teacher at Berkeley High School who raced for the University of California, Berkeley, in the early 1990s, formed NorCal in 2001. The league began as a cycling club at Berkeley High seven years ago, when only four students signed up; that number doubled the following year and then steadily increased. Now NorCal boasts more than 200 students from at least a dozen schools in Northern California who compete against each other in six races held during the spring sports season. The league also sponsors winter and summer riding camps.

Berkeley High has about 30 racers on its roster, with one head coach and two assistant coaches. Fritzinger's title is team director. "I talk to the athletic director now, instead of the activities director," he says. "Cycling is obviously an athletic program. The fact that it's not an official California Interscholastic Federation sport seems kind of secondary. It's just like other sports. We have coaches, we hold practices, the kids are getting in really good shape and people are recognizing us as a team sport."

Fritzinger has achieved what Mike Kuhn and Mark Laser can so far only dream about. In 2004, Kuhn, a former racer at Bucknell University and now a cycling coach, formed the "experimental" Pennsylvania Scholastic Cycling League (PASCL), whose participants race in six Wednesday-night events held between early April and mid-May, culminating in a weekend state championship event. Each regular race draws approximately 15 cyclists from eight schools in the south-central part of the state. Because the races happen on nights not typically dominated by high school baseball, softball and track, student-athletes from other spring-sports teams are encouraged to participate.

"I look at the sports that are big in this country -- football, baseball, basketball -- and kids get started at a really young age," Kuhn says. "Cycling, for the majority of people, is a second or third sport. They play a sport in high school, but then go off to college and don't make the team there, so they find cycling. And there are a lot of people who don't even get into the sport until their late 20s or early 30s. If you don't get into the sport until then, you're not going to race professionally. I would love to see more people be successful at a higher level and a younger age."

Kuhn enlisted help from Laser, a fellow racer and a math teacher at Yellow Breeches Middle School in Boiling Springs, Penn., to help get PASCL rolling. Laser is also the advisor for the middle school's cycling club, which meets for 45 minutes every six days during school time to discuss equipment and technology. Club members also participate in races and PASCL events.

Although Laser says his contact with the school's athletic department is minimal, administrators did allow Yellow Breeches Middle School to host the 2004 Pennsylvania State Cyclo-Cross Championships in November. Cyclo-cross is essentially cross-country cycle racing confined to a small area and traversing several different surfaces. Racers lap the course many times during a race, providing spectators with more opportunities to see the action. That branch of the sport is becoming so popular that Kuhn would like to begin a PASCL cyclo-cross league for students in the fall, which could generate more interest in the league's spring riding season.

"You need somebody in the school who is passionate about the sport who can let kids know that there is another sport out there for them to participate in," says Laser, who contends that the knowledge base for cycling is so specific that most kids aren't going to be able to approach a typical coach and ask him or her how they can become a better racer, anyway. "There may be some benefit to having access to strength-training facilities and providing cross-training opportunities -- running or swimming or something like that -- when the kids aren't racing. But I don't think you need to have the athletic department involved. I'd like to see cycling reach critical mass, with so many kids racing that it gets athletic departments' attention."

The handful of kids that Laser sees cycling today could become a much more substantial group within the next few years. "States like Wisconsin, Michigan and West Virginia are becoming known as small mountain-biking meccas," Fritzinger says. "It's only a matter of time before they'll want to set up leagues there, too."

But before high school cycling takes off across the country, the sport will have to overcome misperceptions about its dangers and costs.

While much of the public's image of cycling, particularly mountain biking, may be gleaned from eye-popping Mountain Dew commercials featuring riders flying through the air, Fritzinger says the average speed of mountain bike racers (who are required to wear approved helmets) is actually under 10 miles per hour. The Insurance Institute for Highway Safety reports that only about one percent of all motor-vehicle-related deaths involve bicyclists, and most schools require their racers to join USA Cycling, which offers reduced student fees and provides insurance coverage, alleviating the risk to schools.

Racers typically use their own bikes -- and not all of them are expensive, high-end models -- but some schools also own bikes, which they have purchased using money from the Carol M. White Physical Education for Progress (PEP) grant program and incorporated into their physical- education programs. Neither NorCal nor PASCL will turn away students who either do not have or cannot afford the proper equipment.

Meanwhile, Laser would like to see PASCL's progress accelerate faster. That's why he hopes to team his Yellow Breeches Middle School club with an active racing program at the Carlisle Family YMCA. The partnership would be modeled after Y-Riders, a regional cycling club in Colorado run by the YMCA of Boulder Valley, which coordinates instruction and other activities with local schools. "If we could use the resources of the YMCA to draw more young people into the sport, then those riders could also race in PASCL events," Laser says. "They would complement each other."

That kind of partnering will be invaluable in fulfilling the vision that both NorCal and PASCL officials have of spurring a national movement. "What we do on Wednesday nights is relatively easy," Kuhn says. "It takes some organization on my end to handle the paperwork and get the medals, but putting on a race doesn't take much. To get the kids excited about a race doesn't take much. If I can find people in other places to help this thing grow, I don't have any doubt that we can get more kids racing."