Call Of the Wild

The mission of nature preservationists goes well beyond simply setting aside parkland. 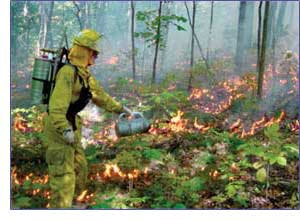 A controlled burn in Ann Arbor, MIA sun-speckled path meandering its way through Ann Arbor, Mich.'s Olson Park is shaded by towering oaks and maples and lined with a variety of ferns and honeysuckle. To the untrained eye, this scene has all the makings of a pleasant, woodsy hiking trail. But along this trail, many things are out of place.

For starters, the honeysuckle plants and maples are non-native invasive species, according to David Borneman, natural area preservation manager with the city of Ann Arbor's Public Services Division. In fact, many of the undeveloped parks or natural areas in Ann Arbor are under siege from a maple invasion. "Sugar maples and red maples that are native trees -- but historically would have been down in lower, wetter soils -- are moving into higher, drier areas that were dominated by oak," says Borneman. "Around here are places that have big oak trees overhead and nothing but maple seedlings coming in underneath that are shading out all the wildflowers."

The average outdoor recreation enthusiast often has no idea that what he or she may be witnessing along a forest trail is ecological genocide. Borneman lauded the widespread call for open space preservation in the late 1990s, but he laments the fact that today, even among those people friendly to the cause, many fail to realize that preservation entails much more than simply earmarking parkland for protection. "People have a general sense that it's important to save those blocks of green space from development," he says. "But setting them aside from the bulldozer is not enough. Even if you put up a fence and a sign that says 'Nature Area,' that's not going to keep out the invasive species that are bound to invade those sites. You may find yourself in 20 years with woods that are full of invasive species, as opposed to woods that are full of spring wildflowers -- one of the amenities for which the land was originally protected."

It makes sense, then, that nature preservationists spend as much of their time teaching the public about the need to actively maintain open spaces as they do actually working the land. In Ann Arbor, much of that education is provided through a web site maintained by Natural Area Preservation (ci.ann-arbor.mi.us/ publicservices/fieldoperations/naturalarea pres/nap_main.html). The web site features fact sheets on native and non-native invasive plant species. Through quarterly newsletters, it also offers Ann Arbor residents up-to-date information on volunteer opportunities (NAP holds about 65 "workdays" each year) and the department's overall preservation activities.

"In the early years, when not everybody was on board with the sort of restoration activities that we were doing, we had a lot of backlash when we'd go into different sites and start cutting down some invasive trees, or using fire," says Borneman, whose department, though recently reassigned from the parks and recreation division to public services, has existed for nearly 15 years. "Those were things that people didn't understand at all, and understandably so. We quickly learned that we needed to ramp up our education program."

But as they delved into their new education program, NAP officials found themselves doing some soul-searching. "Our original mission statement was to 'protect, restore and champion Ann Arbor's natural areas,' " says Borneman. "We changed it to 'protect and restore Ann Arbor's natural areas and foster an environmental ethic among the citizens.' That was for a couple of reasons: one, so people better understand what we're doing. But also because we are relying more on volunteers to help us -- and not just in the sense of them coming out to a workday and then going home. We have a very active parks steward program through which we're trying to reach out to people who have long-term connections to these pieces of land."

The focus is similar to that of Eugene, Ore.'s Parks and Open Space Division's NeighborWoods tree steward program, which targets tree planting in urban settings, primarily along streets and boulevards. Not only can city residents sign up to adopt trees, they're shown how to maintain the trees on their own time. "We gave people a month-long school; they came on Saturdays and learned about tree biology and different pruning techniques," says Sarah Medary, natural resources manager for the city of Eugene. "On the last day, we outfitted them with tree steward vests and pruners. They're going out and doing this work, and they'll train the next batch of volunteers."

But such programs aren't solely about capitalizing on free labor. Rather, they're more about giving parks back to the people and instilling within them a sense of ownership. "We, as humans, are the ones who brought over all these non-native species, fragmented the landscape and caused all the problems that it's now facing," says Borneman. "I feel like we have some sort of responsibility to be better caretakers of the property."

In Ann Arbor, this involves an act that for some may immediately conjure up images of irresponsibility. Each fall, Borneman and his staff wait anxiously for perfectly clear, dry days -- the type of days TV producers love to juxtapose against the on-field action of a University of Michigan football game -- because as it happens, they're ideal for setting ablaze nature preserves in order to clear the land of non-native invasive plant species. After all, there's no better fuel for a ground fire than a blanket of crisp, dry leaves.

Controlled burns are among the most effective means by which to restore ecological order to open space preserves in the Midwest and elsewhere. "Fire has been a regular part of the landscape for thousands of years," Borneman says, noting that causes of fire ranged from lightning strikes to Native American preparation of hunting lands. "Landscapes that evolved within this climate have been very much shaped by those regular, annual fires. With the loss of those fires 100, 200 years ago, things have changed very drastically."

Today, controlled burns in Ann Arbor take place on 5- to 10-acre patches of nature preserve (NAP maintains 2,000 acres of parkland, 1,200 of which are undeveloped). A burn is controlled, in part, by "fire breaks" -- roads, trails, rivers, streams, railroad tracks, even mowed lawns -- that serve as natural obstacles to prevent flames from jumping. Members of the fire crew, equipped with protective clothing, drip torches and five-gallon backpack water sprayers, light the ground fuel, burning a patch in a pre-designated pattern -- starting on the area's downwind side and generally working away from the fire breaks, toward the patch's center. Meanwhile, other burn crew members monitor smoke dispersal, updating the fire starters via two-way radios on wind speed and direction to help keep smoke plumes from annoying residents of neighboring homes.

From start to finish, it may take four or five hours to administer a burn. And the whole time, volunteers are welcome -- in fact, expected -- to work alongside park professionals. "These backpacks of water that we wear weigh about 50 pounds each," says Borneman. "And people are climbing up and down steep hills. It's hard work."

But if such volunteer activities weren't hard work, outdoor recreation enthusiasts might not appreciate the daunting task of professionals responsible for maintaining nature preserves. Says Eugene's Medary, "One of the ways you get people to recognize that it's a lot of work is to get them out there volunteering. Because then they go hiking, see all the invasive species and all the work that needs to be done, and they get it."