Despite reservations, Minnesota becomes the first state in the country to experiment with instant replay. 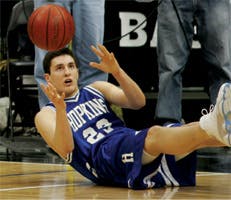 Basketball Player It was the shot literally replayed 'round the world. With the clock running out in overtime during the 2005 Minnesota Class 4A title game, Hopkins High School's Blake Hoffarber launched the ball while lying across the three-point line, nearly flat on his back. The officials ruled the basket a two-point buzzer-beater - a call confirmed by television replays unseen by the referees - that sent the game against Apple Valley's Eastview High into double overtime and set the stage for an eventual 71-60 Hopkins victory.

Hoffarber's shot, repeated on sports-highlights shows here and abroad, also went on to win the 2005 "Best Play" ESPY, an award presented by ESPN for excellence in sports performance.

But what if game officials had made the wrong call?

That's apparently what happened two weeks earlier, during Minnesota's Class 2A boy's hockey championship game. A late goal by Moorhead High against Richfield's Academy of Holy Angels wasn't counted after officials ruled that a high stick had batted the puck into the net. Replays, however, revealed that the goal was legit, a fact that could have altered Holy Angels' 6-4 win.

Those two close calls - one right, one wrong - in a two-week span at the highest levels of interscholastic athletics convinced Minnesota State High School League administrators that the time had come to implement instant replay. This month, in a nationwide high school first, instant replay will be used by game officials in limited situations (see "Rules of Review," page 101) during the state boys' and girls' basketball semifinals and finals at the Target Center in Minneapolis and during all quarterfinals-and-up boys' and girls' hockey games at the Xcel Energy Center in St. Paul. Instant-replay technology is already in place in those venues for the pro teams that play there.

"As the tournament director, I don't want to be handing that trophy out to the wrong team," says Kevin Merkle, the MSHSL's associate director in charge of the boys' state basketball tournament. "Determining who the state champion will be is a big deal, and if you have a last-second shot that determines the outcome of the game, why would you not want to make sure you got the call right?"

But as Bob Molinaro, a sports columnist for The Virginian-Pilot in Norfolk, Va., wrote in the wake of the MSHSL's decision, "Air traffic controllers need to get it right. Surgeons and tattoo artists, too. People who fire rockets for the military should get it right. But men and women with whistles and striped shirts who work high school games? Put them near the bottom of the list of people who actually need to get it right every time."

To a certain extent, Molinaro's right, admits Bill Topp, a 17-year veteran of officiating high school basketball games, and the vice president of publishing and management services for Referee magazine, published by the National Association of Sports Officials. But Minnesota's decision to adopt instant replay, even on a limited basis, was inevitable, Topp says - considering how commonplace the practice has become in professional and collegiate sports.

"At some point, it was going to happen in high school, especially at state tournaments, where there's a lot on the line," he says. "We, as officials, are out there to get the call right, but at the same time, high school sports is about teaching kids to accept the call, positive or negative. Not everything in life goes your way, and sports are supposed to help teach you that. It's a shame that we had to reach the point where we need instant replay to satisfy people. If replay goes well in Minnesota - and the likelihood is that it will - there will certainly be pressure on other states to consider it."

Minnesota may be the first state to give the nod to instant replay at high school sporting events, but the topic has come up in previous discussions at the national level. Last year, Larry Boucher, then-chairman of the National Federation of State High School Associations' Basketball Rules Committee, proposed a uniform rule change allowing the use of instant replay in game-deciding tournament situations to determine whether a last-second basket counted. It was met with minimal support, says Mary Struckhoff, the NFHS liaison to the committee, who also was recently appointed the NCAA's coordinator of women's basketball officiating. She cites the purity of the high school game and the inability of some high school tournament venues to provide instant-replay technology as reasons why the NFHS does not favor instant replay. "As an official, I want to get the call right - and instant replay gives me the opportunity to get it right," Struckhoff says. "But there's a caveat: What price do we pay to get it right?"

"I still contend that it's a good rule change," says Boucher, an assistant commissioner of the Kentucky High School Athletic Association. Nevertheless, he opposes a change in his state without the National Federation's blessing.

Instant replay in Minnesota will undergo a review of its own following this month's basketball and hockey tournaments, and Merkle says there has been little or no discussion of using it in football - a logical next step. "Our discussions were only on those two sports, only in certain situations and only because we're in arenas where we have this capability," he says. "But my concern is, once we start, where does it end? If we use replay at the end of the game to see if the shot is a two-pointer or a three-pointer, why wouldn't we do the same thing at any time in the game?"

And as at all levels of sport that use instant replay, Topp adds, the potential for officials to also notice an uncalled foul, a foot out of bounds or some other missed call while reviewing a play for unrelated reasons could pose difficult challenges. So, too, could the potential impact on the time it takes to actually play games - a dynamic that once threatened instant replay's use in the National Football League.

"Although the best intentions are to keep it simple, I think there is going to be pressure as situations arise to use replay for more and more things," Topp says. "I can't imagine that it's going to be dropped in Minnesota, especially if there's a situation where it's used effectively."