Outdoor facilities get a new twist with June's unveiling of the country's first artificial whitewater park. 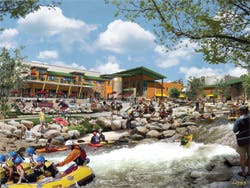 U.S. National Whitewater Center Located 15 feet above a kayak drop on Boulder (Colo.) Creek is the back door to the offices of Recreation Engineering and Planning, a whitewater park design firm and the employer of Scott Shipley. For Shipley, a mechanical engineer and three-time Olympian who holds four world titles in the K-1 whitewater slalom, working at Recreation Engineering and Planning is a dream job.

But rather than boast about his cushy work/play environment, Shipley is working to open channels - literally - that will permit the general public to have similar access to whitewater sports opportunities.

This month, work is expected to wrap up on the U.S. National Whitewater Center, a $35 million outdoor recreation park located minutes outside of Charlotte, N.C. Designed by Recreation Engineering and Planning, the first-of-its-kind, 300-acre project is highlighted by a multiple-channel, self-contained artificial river that can be easily modified from "easy water" to more challenging rapids to accommodate rafting, canoeing and kayaking. The river has an upper starting pool and a lower finishing pool, connected by an incline conveyor belt system that returns paddlers to the top of the course.

Despite its name, the USNWC is intended to serve not as a primary training site for America's elite canoe and kayak athletes, but as a playground for families, youth groups and virtually anyone with an interest in outdoor recreation.

"You can have a World Cup, an Olympics or an Olympics team trial at this venue, but it's designed for people first," says Shipley. "We're doing miles of mountain biking trails, roughly a mile of whitewater experience and a climbing center. We're offering a tremendous number of opportunities so that when people come out here, they can do everything from go for a walk to compete in an adventure race."

Through his work on the USNWC, Shipley feels that he's helping meet a growing demand for outdoor recreation facilities. According to the Outdoor Industry Association's 2005 Participation Study, overall participation in 13 core human-powered outdoor activities - including bicycling, hiking, trail running, canoeing, rafting and skiing - rose 6 percent among Americans age 16 and older from 1998 to 2004. The OIA also reports that outdoor sports are attracting a more diverse crowd, as 21 percent of all 2004 participants are ethnic minorities, up from 16 percent in 1998.

But the statistic that really has Shipley and USNWC director of development Lance Kinerk brimming with enthusiasm is the fact that during this same span of time, participation in kayaking jumped a staggering 130 percent. "When they were building the first ski slopes out West, did they think that skiing was going to be as big as it is today? Now, just about anywhere there's a hill and some snow, there's a chair lift," says Kinerk. "I think kayaking is the ski industry, 50 years later." Kinerk is basing his forecasts on usage patterns at existing commercial whitewater venues located on the surrounding region's waterways. Those businesses draw a combined 289,000 paddlers each year, he says. Because of the USNWC's location near the juncture of two major interstate freeways and seven miles from Charlotte/Douglas International Airport, Kinerk expects to draw from the region at least 175,000 paddlers a year, plus as many as 60,000 visitors from the city of Charlotte itself to partake in other activities. "Those other facilities are usually within a 100-mile radius of about five people. We're within a 100-mile radius of 7.1 million people," he says. "We also thought we had a little bit of an advantage in the fact that we have a lit course and we're going to be operating 12 months out of the year."

Although it has yet to set in stone its pricing structure, the USNWC plans to charge paddlers anywhere from $20 to $35 each for a 90-minute, guide-led experience on the three-channel recirculating river, which can accommodate 250 paddlers simultaneously. "You're able to bomb down a course and come back up with only a minute's lost time," says Shipley. "In 90 minutes, you'll be able to go through everything at least once - whether that means the people in the raft choose to stop and play in eddies and pools, do the scenic channel, or go through the big channel once again. It's not an amusement park ride, per se. You need to actively take part in your activity and get out there and paddle. We very much want it to be like a real river trip."

Several key technological innovations are responsible for giving the USNWC's whitewater course a natural feel. Submerged beneath a waterfall from the upper pool to the lower pool are seven 680-hp pumps capable of pumping 536,000 gallons of water per minute - or enough pumping capacity to fill a 50-meter, Olympic-size pool in eight seconds - into the park's 50- to 60-foot-wide concrete channels. "We went through a tremendously long selection process to get the pumps," says Shipley of the Swedish imports. "They're submersible pumps, like you'd use in a well, as opposed to axial flow pumps like you'd see down in New Orleans. The advantage to them is that all their heat and noise is lost in the water, which allows us to have these things right in the middle of our site and you don't have a big roaring noise or a huge ventilated, air-conditioned room to deal with."

Further enhancing that feel are real boulders and river rock that line the park's channels in an attempt to replicate authentic river conditions. Grassy areas along the channels' banks are intended to invite visitors to take front-row seats as their friends and family members navigate the rapids below.

What's more, feet-dangling fans won't have to worry about polluted water. The USNWC's water is drawn from the tap, not the nearby Catawba River, and is treated by an ultraviolet-light filtering system. Olympic whitewater courses still operating in Barcelona, Sydney and Athens all rely on seawater, which has led to problems ranging from high water evaporative rates to paddler illnesses and skin rashes.

But the best part about the USNWC's design, according to Shipley, is that it can be replicated anywhere - leading him to speculate that private developers will soon latch onto the concept, replacing the current stable of golf course residential developments with masterplanned communities centered on whitewater parks. "It's not like we invented this technology; we're just implementing it in this scenario," he says. "This thing is completely autonomous in the sense that it's independent of needing the river. We could build this in Phoenix, Las Vegas or British Columbia. I could build one of these parks anywhere."