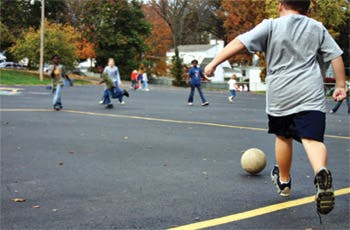 They attend a school whose name might suggest institutional endorsement of adventure, creativity and discovery. Nevertheless, these days the students of Cheyenne, Wyo.'s Freedom Elementary School are finding that they have anything but free will - especially on their school's playground.

As of January, Freedom students have been prohibited from playing tag at recess because, as principal Cindy Farwell told USA Today in June, the game "progresses easily into slapping and hitting and pushing instead of just touching."

Such restrictions are being seen all over the country, as schools from Oregon to South Carolina have begun instituting bans on traditional playground games such as tag, soccer and touch football out of what officials say are concerns for student safety.

Fearful of injury to their students and thus the threat of costly litigation, schools are going to what some people might consider drastic ends - or at least they would be considered drastic by anyone old enough to remember playing Red Rover and dodgeball as youths. For example, last year Broward County (Fla.) Public Schools - which paid $561,000 to settle 189 claims for playground accidents dating back to 1999 - posted "no running" signs at the playgrounds of all 137 of the district's elementary schools.

Such measures were enough to elicit the disdain of Joe Frost, an emeritus professor at the University of Texas-Austin and director of the university's Play and Playgrounds Research Project. "Play is one of children's chief vehicles for development," Frost told the Sun-Sentinel of Fort Lauderdale. "Right now it looks like we're developing a nation of wimps."

The trend toward excessive caution bothers even Donna Thompson, director of the National Program for Playground Safety. "Teaching children how to move - how to run, stop, start, change direction, fall and roll - is extremely important," she says. "Recess is the greatest opportunity for them to learn that."

As far as Scott Chovanec is concerned, efforts to eliminate playground games are just as harmful as endeavors to ditch recess altogether. "To me, removing those games is foolish. We need to promote as much activity as possible," says Chovanec, assistant athletic director and department chairman of physical education and health at Maine East High School in Park Ridge, Ill. "We need to increase students' activity at every opportunity because these sedentary habits that we're setting for them now are killing them later."

Rather than eliminate all playground games, Chovanec recommends that school officials allow students to engage in games that are safe and organized yet offer them sufficient physical activity, games such as line soccer, flag football and variations of tag. In octopus tag, for instance, one player is chosen to be the "octopus." The others line up along a far side of the playing area. When the octopus calls out "octopus," all other players must run to the other side of the area to avoid getting tagged. Those who are caught must link up with the octopus, becoming one of his or her "arms," and aid in the capture of other players.

And if the thought of allowing groups of students to run rampant arm-in-arm on their playgrounds still seems reckless to some school officials, Chovanec turns the tables. According to him, the teachers and administrators who serve as playground supervisors are the ones being most irresponsible. "Supervisors at recess have to do a better job of choreographing games. Unfortunately, I've seen teachers go out there and they're talking and not really overseeing the kids," Chovanec says, adding that students will behave themselves if given basic guidelines. "Give them simple rules to follow - `These are the three things that you need to do while you're playing tag: There's no pushing, no shoving and the tag can only be applied between the chest and waist and on the arms' - and leave it at that. Put a couple of people in charge, watch them and let them go."