A high-school wrestling coach goes to the mat to raise funds for his team. 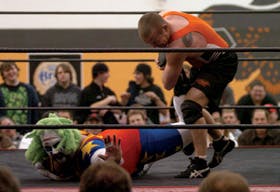 Considering that Dodge helped raise almost $1,500 for the school's wrestling program by stepping into the ring with - and defeating - a 289-pound green-haired professional wrestler known as Doink the Clown, he's allowed the indulgence.

"All coaches battle with fundraising," says Dodge, who weighs all of 160 pounds. "But we get tired of selling candy bars. One reporter asked me, 'Why don't you just sell wreaths or something?' Well, you know what? Not only is that a drain on the people who are under pressure to sell, but it's a drain on the coach who has to collect the money and keep track of everything. It's easier for me to get in the ring with a clown."

Instead of spending a month selling wreaths, Dodge and his junior varsity and varsity squads spent a week selling tickets to Blizzard Brawl 2, a professional wrestling event that drew almost 700 people to Grafton's gymnasium on a Saturday night during the holiday season. "There will be no girls in bikinis, no blood and no swearing," Great Lakes Championship Wrestling promoter Dave Herro told the Milwaukee Journal Sentinel a few days before the event, which in addition to the Dodge-Doink match featured such wrestlers as Demolition Ax, Bobby "The Brain" Hennan and Sensational Sherri Martel. In fact, it was Herro's idea to turn Blizzard Brawl 2 into a fundraiser for Black Hawk wrestlers, who barely get by on a $400 annual budget.

"You're only as good as your main event, and I think one of the things that got people in the door was the fact that I was wrestling this clown," says Dodge, a popular 28-year-old teacher who has almost doubled the number of wrestlers on the school's team since his arrival in 2000. In addition to requiring the family-friendly show that Herro promised, the Grafton School Board also requested that Dodge become an employee of Great Lakes Championship Wrestling for a day - just in case he was injured and required workers' compensation. That eliminated any liability for the school district.

Dodge spent eight hours training for his brawl, including two hours in the ring with Doink - an evil-looking character used by several pro wrestlers since the 1990s and played this time by Phil Monahan. "Everybody says wrestling is fixed. Sure, the outcome is fixed," Dodge admits. "But the reality is that I have to know where to position myself so that when my opponent body-slams me, I'm not going to get injured. When I take a punch to the forehead, I have to know how to fall. Doink didn't go lightly on me. I was being thrown around, and there were times when it took everything I had just to remember the moves."

With proceeds from Blizzard Brawl 2 earmarked for new uniforms and mats, Dodge is eager to build upon his unblemished professional wrestling record; Herro is already reportedly working on recruiting a new challenger for a proposed Blizzard Brawl 3. "I had a good promoter and a couple of good trainers who showed me how to get in and out of the ring without getting hurt," Dodge says. "And I had a professional wrestler who knew how to wrestle with me. This is not something I would just go into blindly."