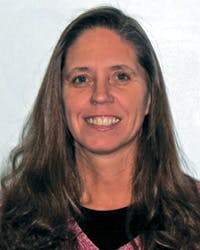 On Jan. 8, the University of Florida became the first school in history to simultaneously hold national titles in the NCAA's two highest-profile sports - football and men's basketball. Arguably no one on the Gainesville campus has felt the impact of this athletic achievement to a greater degree than Debbie Gay, the UF athletic association's licensing manager. For the fiscal year ending in July 2006, Florida reportedly pocketed $3.2 million in merchandise sales - a figure that Gay, a 22-year veteran of the UF licensing department, expects to double in 2007. Paul Steinbach asked Gay how she goes about satisfying the memorabilia cravings of Gator Nation.

Q: What additional challenges do you face in light of all that success? A: I get a ton of artwork for products that manufacturers want to market. I'm looking not only at our standard artwork approvals, but artwork for the football national championship and artwork commemorating the dual national championships. Plus, there's an increase in interest from companies that have products that they believe will enhance our program.

Q: How do you approach the approval process? A: A lot of it is just making sure that the trademark designations, colors and logos are reproduced the way they should be. We do allow for creativity with our marks, as long as it's done in good taste. Years ago, I had submitted to me an image of a bunch of alligators sitting at what looked like a bar. The mugs in their hands contained foaming yellow liquid, and the company was trying to convince me that it was orange juice and not beer. That one didn't fly.

Q: Has the process gotten any easier since the 1996 championship? A: As advanced as we are with our licensing programs in general, and with our online approval process in particular, I'm now able to do more pre-approvals of "if win" scenarios. Back in '96, we didn't have that. After the Sugar Bowl that year, my fax machine ran nonstop for two weeks with hundreds of designs coming in, and I had to try to keep up with them. Most approvals back then were given after the companies had already manufactured their products, so we had more issues with artwork mistakes.

Q: Is there any difference between football and basketball in terms of preparing for a title run? A: Basketball is a little different, because the championship is pared down within a much tighter timeframe. We knew we were going into this football championship for four weeks, so I had all that time to look at submitted artwork and approve it prior to the game.

Q: If Florida manages to repeat in either sport, do you think Gator Nation will gobble up more or less merchandise than the previous year? A: Probably more. I'm already looking at pre-approvals for basketball. Companies are already interested.