The Spirit of Giving

In a real-life Christmas story, members and staff give time and money to save their beloved health club. 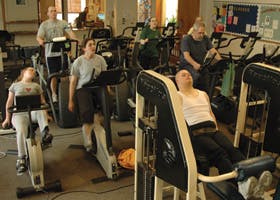 City Health Club is a different sort of club in a different sort of community: The 24-year-old business, founded along once-unsavory Green Street in Ithaca, N.Y., is described with a laugh by Frank Henry, its office manager, as "a for-profit that for a number of years has operated like a nonprofit, believe me." Nonetheless, when owner Toni Lieb announced on Dec. 10 that the club would close its doors the Saturday before Christmas, the reason was money - or rather, a lack of it. With memberships having dwindled from a peak of 1,200 down to about 600, it was "not economically feasible for us to remain open," she said at the time.

Although what followed - the death of a club and its immediate resurrection - sounds like the basis for an Easter sermon, it's really more of a Christmas story, since generosity from every quarter kept the lights on past the holidays and into the new year. Members came forward to offer their help, financial or otherwise. What was left of the staff worked without pay and held meetings to form a plan for taking the club's reins and keeping it running. And Lieb said, basically, You want it? It's yours.

"I'm offering advice and counsel, trying to help them transition," Lieb says. "I'm dissolving the LLC that's running City Health Club, and have pretty much said, 'If you can continue running this business, then go for it.' They have to form a new company, and I've urged them to get the utilities and phone changed over to their name. They're having a hard time with that right now, because they need someone credit-worthy. They're giving it their best shot, but nobody knows if this is going to be successful or not."

The club's "Christmas miracle" followed a long period of decline due to many causes. Henry recalls that it was just three years ago that the club had its "best year ever," but that this was followed by "a rapid change in the local health industry." Several new clubs opened in 2005, including Island Health & Fitness, the area's largest at around 35,000 square feet and the beneficiary of a partnership with Cayuga Medical Center.

"There was just a big boom," Henry says. "Everybody was kind of jockeying for position, not quite knowing how the market was going to settle, and simultaneously there was a lot of transition at our club specifically. One of the new clubs was opened by our former general manager, who before that had been thinking of purchasing this facility. He had been in charge of our sales department, and he was an amazing salesman - he was primarily responsible for that great year we had. Things soon started to deteriorate, and it became a real uphill battle."

Last summer, the club emptied out as it normally does during the region's short good-weather season, but there was more to it than that. The club's April decision to stop offering year-term memberships in favor of month-to-month payment plans only - Henry now questions the wisdom of this idea - seems to have sparked a rumor that the club's closing was imminent, further exacerbating the exodus of members to other clubs. In response, the club ran a new-member special of a $25 activation fee and a $25 a month rate, and people began to sign up - four in August, 49 in September, 80 in October and more than 100 in November. "And then the article appeared in the paper stating that we were closing," Henry says. "Oh yeah, we had some really happy people at that point."

But the club also had some really motivated and generous people. While management was wary of accepting donations directly from members, they did welcome early renewal payments from a number of members, which allowed immediate bills to be paid. "People were really responsive and we were able to raise several thousand dollars in the first few days," Henry says. "That helped get us over the initial hurdles."

Members have also taken it upon themselves to actively recruit new members, and others have offered to perform maintenance work gratis. Lieb says this was something of a club staple over the years, as a number of members traded services for memberships in a sort of co-op arrangement.

"The neighborhood was rough at first; there was a flophouse across the street, there were drug addicts," Lieb says. "There were so many people who needed what we offered but didn't have a dime. We offered free week passes at the drug court. They'd put people in rehab, and the club gave them an outlet. We helped people in need, and they'd work two hours a week for their membership. It was our mission from the beginning, to be a community-focused health club where people who really needed a health facility could come."

The club was also meant as a refuge for people wanting to work out in a non-glitzy, unthreatening atmosphere. Lieb recalls ads for Bally Total Fitness at the time featuring "Cher and her leather." She laughs. "It really did a disservice to the health-club industry because it said, 'Hey, if you're not fit and healthy, don't join a health club.' " Lieb, in fact, vowed to go into business for herself in the club industry in 1982 after suffering through a year as an anonymous member of another club.

"I always had a weight problem, not super bad, but I used to go work out with this friend who was just skinny and gorgeous and athletic, and we'd go to the club, and everybody knew her name," Lieb says. "We joined together, we worked out together, we walked into that club together three times a week, and not one person in that entire club knew my name, but everybody knew her name. I'd walk out of there so mad. I actually deserved more attention - she was the athletic one, you know? I needed more help and encouragement and motivation than she did. Why couldn't there be a place where people don't feel discriminated against?"

Lieb lived the club life for almost a quarter of a century; back in the day City Health Club offered day care, so her kids literally grew up there. Now it's Henry's turn, as well as the others whose interest appears to be keeping the club going even if the profit is meager.

"This experience has been very rewarding," says Henry, who after three years working for the club might soon emerge as its owner. "You sit here daily and see the impact you're having on your members, and not everybody is privy to it; they don't see the members who have lost 150 pounds or can walk home now instead of taking the bus. For this whole thing to happen at Christmastime when everybody's stretched so thin, to have members say, 'I want you to be here, I cried when I heard you guys were closing' - it confirmed that what I saw here was real. It was enough to motivate me to continue to fight."