Fields at New York City's Randall's Island Are Getting a Facelift

The fields at New York City's Randall's Island are getting a face-lift, thanks to a new partnership between the city's Parks Department and 20 Manhattan private schools. 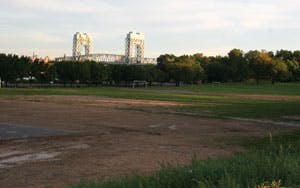 The park at Randall's Island, situated in New York City's East River between Harlem, Queens and the Bronx, boasts 36 baseball and softball diamonds. Unfortunately, few fields are in playable condition; many of the rocky surfaces are riddled with pockmarks and bare patches.

But the fields at Randall's Island are getting a facelift, thanks to a new partnership between the city's Parks Department and 20 Manhattan private schools. The schools - which according to The New York Times are some of the most expensive in the city, but lack on-campus facilities - are investing millions of dollars in the fields' renovation in return for exclusive control over their use during after-school hours.

Collectively, the private schools will pay the city $52.4 million over 20 years to build or refurbish 63 baseball, softball, soccer, football, rugby, lacrosse and other fields on Randall's Island. The city will finance the balance of the $70 million project.

Proponents include Richard J. Davis, chairman of the board of the nonprofit Randall's Island Sports Foundation, which operates the island for the Parks Department. "We knew we needed more and better fields and that we didn't have a natural constituency, like the Central Park Conservancy," Davis told the Times, referring to the fact that Randall's Island has only 1,000 or so residents. "So we went to the independent schools."

Yet, another group that includes parents of public school children, parks advocates, East Harlem and South Bronx residents, and city council members argued that the private schools are, in effect, being offered exclusive field use because they are willing to pay (and pay well) to play in public parks. "We're basically carving out these fields as a time-sharing concept you've seen with vacation homes," said Manhattan borough president Scott Stringer. "We can't have a pay-to-play system that locks out three generations of children."

Parks Department commissioner Adrian Benepe claimed that the newly refurbished ball fields - 14 of which will be covered with synthetic turf - will remain available to public use. Currently, private schools have exclusive permits for 34 of the 36 ball fields from 3 to 6 p.m., when their sports teams typically hold practice. Although those time restrictions will remain in place, under the new agreement the schools' field use will be curtailed to about two-thirds of the total number of fields. "The fact is that private schools will be subsidizing use by a lot of different people," he said.

Convinced that seeking investment from the private schools was the only way to improve the playing fields, Benepe attributed opponents' concern about the project to their unfamiliarity with such public-private partnerships. "It doesn't make them good or bad, it just makes them a different kind of public space," he said of the fields. "If you leave things exclusively up to government, you end up where we were in the 1970s, because the city would not be inclined to invest all the money in this."