Even In Wartime, Soldiers Are Available for Community Service Projects

Even in wartime, individual soldiers and entire units are available to bolster various community service projects. 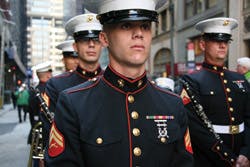 INSTRUMENTAL Parade appearances are a primary volunteer duty, but active and retired soldiers can play an important role in facility repairs, too.
The Grandview YMCA branch of YMCA Montgomery, Ala., has the gymnasium, pool and fitness center one ordinarily associates with Ys - and more besides. Occupying the 45-acre site of a former YWCA resident summer camp, it also boasts nature trails, cabins, picnic areas, soccer fields, a lake and an archery range. With this wider array of recreational facilities comes more need for repairs, something that executive director Bill Meyers has a ready answer for.

Last December, a 15-person contingent from Maxwell-Gunter Air Force Base in Montgomery came to Grandview and split into two work crews. One group replaced the roof of a picnic shelter, while the other installed a handrail along part of a nature trail. Meyers says he plans to have the group back again soon to add a storage shed to the outside of one of the camp buildings, fix the roof of the archery-range pavilion and repair a dock at the lake.

"We've got more than just treadmill repair and stripping and waxing floors; we've got road and trail maintenance, maintenance of cabins and other things on the property," Meyers says. "My staff and I could have done the roof repair, but we couldn't have done it in one afternoon like they did. With all the other things I have to do, it would have taken me four days." 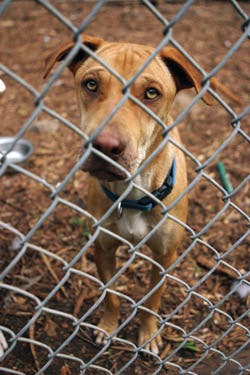 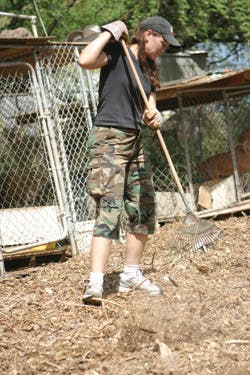 RESCUE MISSION Master Sgt. Heather Brodesen was among the Marine Corps volunteers throwing a bone this spring to Friends for Life, an animal shelter in Waianae, Hawaii.
Who are these people? Your Armed Forces, and they're staying busy even when they're not doing their two primary jobs, readiness and deployment. You'll find them commemorating Earth Day by helping remove trash from a beach in Okinawa, or reaching out to hearts and minds by restoring Iraq's Al Asad Oasis. Here at home, volunteers perform many event-related functions (color guards, flyovers and other public appearances), but also are available to perform a variety of low-profile construction and repair projects for whatever community organizations might need the help.

"A lot of people don't know we exist," says Capt. Carl Redding, public affairs officer for the U.S. Marine Corps, of the Services' many volunteer programs. "The USMC has a community relations branch, and each base and station generates its own plan based on national directives for community service. We leave it up to base commanders to make the determination of what their people will do. We do it all over the world."

Lt. Naomi Dorren, a spokesperson for the USMC community relations department, says the only restriction on community service is that projects should not serve the interests of specific non-government entities. "We don't assist with fundraising projects," Dorren says. "If you wanted help with a car wash fundraiser or something, we wouldn't get involved because we don't want to look like we're selectively choosing one entity over another, or endorsing a particular product or company. But our Marines live in the community, and we want them to get out there and participate in community events - anything from highway cleanups to park renovations to feeding the homeless."

Active-duty personnel are the most likely volunteers, but most bases also involve retired personnel, families and even civilians in these efforts. At Camp Pendleton in San Diego, Katie Kastan, volunteer program coordinator for Marine Corps Community Services, keeps track of 3,500 individuals registered mostly on a referral basis. Kastan says some are looking for an opportunity to gain professional skills to fill out their resume, while others are soldiers looking to utilize the skills they've developed as members of the Corps. For example, various platoons within the 7th Engineer and Support Battalion, whose specific area of expertise is construction and demolition, have worked with Habitat for Humanity and similar organizations in Camp Pendleton and the surrounding community.

That's how Casey Custer, associate executive director of the Vicksburg (Miss.) YMCA, ended up getting the assistance of his local Seabees - or as they're officially known, the Navy Mobile Construction Battalion. "For several years they would come out and do various projects on our Warner Tully summer camp," Custer says. "They did it all. They helped construct some buildings, built decks, redid plumbing, took care of electrical issues in cabins, built bunk beds. They had a variety of skilled workers within the unit. That was what was so great - you knew you were going to get certified electricians, certified plumbers, master carpenters. Whatever we had was kind of a walk in the park for them."

Custer understands that with the Iraq War, the Seabees' availability has been more limited, but he says, in fact, that they would probably still be able to help out if he just picked up his phone.

"Some of them were getting deployed, and they obviously had to put their energies in that direction," he says. "But they told us it wasn't a closed door, and we look forward to the day when we can have them back. They sure were a huge help." 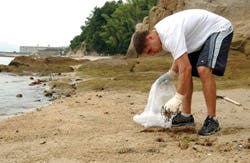 CLEARED TO LAND Beach cleanup is a breath of fresh air for personnel at Marine Corps Air Station Iwakuni in Japan.
A glance at the Volunteering page at the Marine Corps Community Services web site (www.mccsvolunteering.org/custom/500) shows many opportunities to help out, including at youth centers and schools, and with base youth sports programs. Volunteers come from programs such as Kastan's, as well as from the USMC's Single Marine Program, which exists to give Marines, 60 percent of whom are in their first tour of duty and young (and many of whom, obviously, are single), a number of what an SMP spokesperson calls "wholesome activities" to fill their off hours.

Kastan also partners with other service organizations such as Volunteer San Diego to match volunteers with groups that need help. Volunteer San Diego, she notes, has in recent years set aside a group of volunteers specifically for fire recovery efforts to help home owners and whole neighborhoods affected by brush fires with brush clearing, tree replanting and various other tasks that require a large amount of physical labor.

To date, Kastan says she hasn't worked with any parks and recreation departments, but she's not averse to helping out other like-minded civic organizations.

"We haven't been approached by them, but it's definitely something we'd be open to," Kastan says. "Most of our volunteers want to see the work that they're doing have as big an impact on the overall community as it possibly can."