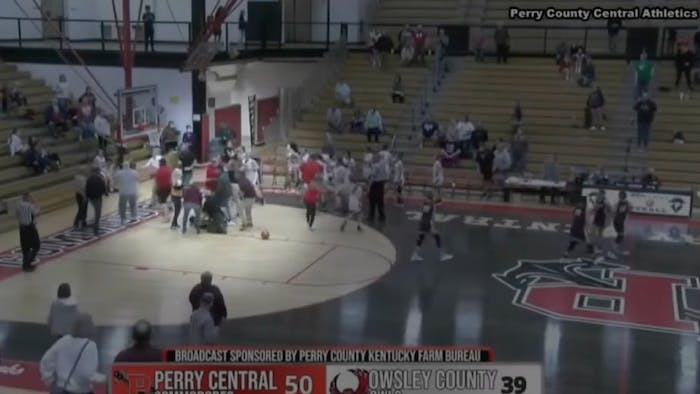 Officials with the Kentucky State Police say Owsley County Sheriff Brent Lynch has been arrested after a fight broke out at a Perry County high school basketball game earlier this month.

Lynch, 47, is accused of hitting a girl in the face during a fight on Dec. 3 between the Perry Central Lady Commodores and the Owsley County lady Owls basketball teams.  Lynch is facing a fourth-degree assault charge, WLEX-TV reported.

Lynch turned himself in and was arrested by the Owsley County Sheriff's Department Thursday morning and was booked into jail.

Video obtained by WLEX-TV showed the fight that broke out during the Perry County vs. Owsley County girls basketball game.

Lynch is an assistant coach for Owsley County girls basketball. The Owsley County Judge/Executive says he knows Lynch and said what occurred was "out of character” for Lynch.

In a statement, Perry County Schools Superintendent Jonathan Jett said the teams were separated following the fight and one player from each team was ejected by KHSAA basketball officials who were working the game.

Dr. Tim Bobrowski, Superintendent for the Owsley County School District, says the county is "fully complying" with KHSAA's recommendations and says Lynch was suspended for one game.

"Per KHSAA's recommendations, both teams have suspended 4 student athletes for 2 games," Bobrowski said in a statement.

The incident remains under investigation.