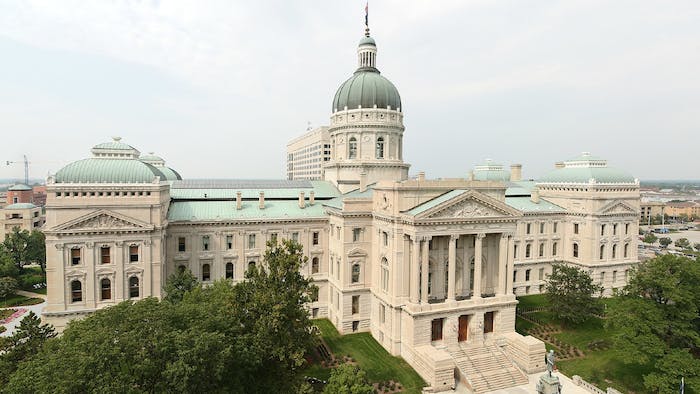 A bill that would ban transgender women and girls from school sports is moving forward in Indiana.

The bill would prohibit students who were born male and identify as female from participating in a sport or on an athletic team that is designated for women or girls.

The proposal doesn’t prevent students who identify as female or transgender men from playing on men’s sports teams.

The AP reported that House education committee chair Rep. Bob Behning said the bill is supported by a “majority” of House Republicans.

The proposed bill now heads to the full House.

The legislation drew nearly three hours of testimony in the committee Monday, with opponents maintaining that it's unconstitutional, sexist and bigoted.

“Sports are promoted for K through 12 kids not so they can become scholarship, pro athletes, but because ... sports participation builds self esteem, positive mental health outcomes, self confidence and scholastic achievement," said Emma Vosicky, executive director of GenderNexus, an Indianapolis-based social service agency for trans and nonbinary people and their families. “(This bill) wants to strip these benefits from a whole category of children as punishment for their experience and understanding of their gender.”

Representatives from the American Civil Liberties Union testified that the group intends to file a lawsuit if the “hateful legislation” is signed into law, the AP reported.

“There is no place in Indiana where trans girls have taken over girls sports teams,” said Kit Malone, advocacy strategist at the ACLU of Indiana. “Trans people by whatever name used to call them are your neighbors, your friends, your family members, students in your schools. How can we possibly do this?"

Republican Rep. Michelle Davis of Greenwood, who authored the bill, said the purpose of the proposal is to “maintain fair competition in girls’ sports." She supported an amendment accepted by the education committee on Monday that removes postsecondary education athletics from the proposal.

“I know from experience that female athletes deserve fair competition and an even playing field,” Davis said, as reported by the AP. “This bill will ensure just that — a fair and equal opportunity to compete — for Hoosier girls, now and in the future.”

The legislation would also establish a civil action for violations, and compliance by schools wouldn’t be a liability.

Idaho state Rep. Barbara Ehardt testified Monday at the Indiana Statehouse that the legislation “is not about humanity or inclusion,” but rather “about competition and winning.”

The conservative Republican representative from Idaho Falls passed the nation’s first ban on transgender athletes in women’s sports in 2020, although the law hasn’t been active for over a year while it’s being challenged in court.

If the bill passes the Legislature, Indiana could be the 10th Republican-dominated state to adopt such a ban on transgender women or girls.

In Idaho and West Virginia the laws have been halted by federal judges.

The U.S. Department of Justice has challenged bans in other states, calling them violations of federal law.