NFHS Searches for Solutions to Cover Loss of 50K Officials 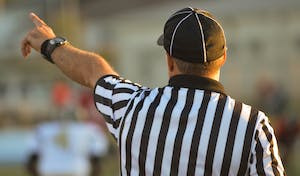 Several times in this column the past three years, the NFHS has shared concerns about the declining number of officials for high school sports. Last fall, in fact, the headline stated that the officiating shortage had reached a crisis level across the country. A recent survey now provides solid proof for those concerns.

A survey of state high school associations indicates that approximately 50,000 individuals have discontinued their service as high school officials since the 2018-19 season – the last full school year unaffected by the pandemic.

Dana Pappas, who has been on board as NFHS director of officiating services since last summer, said 43 states have reported losses totaling more than 33,000 officials. However, several larger states have not reported yet, so the exact figure is likely to approach 50,000.

While there are several contributing factors to this sizeable decline, such as the age-old problem of unsportsmanlike behavior by students, coaches, parents and other fans, Pappas said one of the latest challenges is related to the pandemic.

“In talking to some of the state directors, many of these losses are people who were probably on the brink of retirement, and then COVID kind of forced the issue,” Pappas said. “Nationally, we’ve gone from about 240,000 to 200,000, which has become an area of concern for states just to cover games at all or with the maximum number of officials on a crew.”

Interestingly, about the same number of individuals – between 50,000 and 60,000 – have expressed an interest in officiating the past four years through the NFHS’ #BecomeAnOfficial Program, but the number of officials actually coming in the front door do not come close to matching those going out the back door.

There is some good news on the horizon, however. After hearing the same message – shortage of officials – from every level of sport in the country, the NFHS is orchestrating and leading a first-ever National Officials Consortium Summit in April to collectively address the concerns.

“What we discovered was that everyone was working on the same problem, but there is no strategic collaboration between the entities,” Pappas said. “We understand that everybody is reliant upon our pipeline at the high school level. So, we want to work together to replenish and keep that pipeline healthy and figure out ways that we can do the work collectively instead of everyone doing it on their own.”

In addition to the NCAA, more than 30 national-level sports organizations have committed to be a part of the consortium hosted by the NFHS in Indianapolis April 12-14. Various youth, high school, college and professional sports organizations, as well as national governing bodies for Olympic sports, have expressed an interest in coming together to address the growing shortage of officials.

“In our discussions with these groups, we realize that instead of just talking about the problem, they want to be a part of the solution, which is exciting,” Pappas said. “We want to get all hands on deck instead of everyone trying to do their own thing to accomplish the same goal.”

While unsportsmanlike behavior continues to be a major issue, it’s not one unique to high school sports. It will be helpful to address this issue – and others – with ideas on solutions from all levels of sport.

In the meantime, the NFHS is continuing in its attempt to recruit more individuals to officiating, including current high school athletes and current parents of athletes.

“Many sport parents have been around the sport for 18 years, and then their kid graduates, so we’re trying to reach out to those individuals to get them to stay involved on the field, on the court or on the mat as officials,” Pappas said.

“Kids coming out of high school think they have two options – to play sports or to coach sports. They forget about the people who are officiating their games! So, how do we make officiating something that is at the forefront of their minds? When they are leaving high school or leaving college, they need to understand that there is an entire career path they could follow in the world of high school officiating.”

In an attempt to encourage more individuals to consider officiating high school sports, the NFHS is trying to celebrate those involved and turn negatives into positives.

“A lot of times in the news we hear people blaming officials because they lost a game,” Pappas said. “We hear stories about assaults and stories about poor treatment of officials. So, we are trying to highlight individuals within the officiating community to talk about how officiating was transformative for them in their lives, and why it’s important to get involved.”

While work continues to retain more officials by improving behavior of players, coaches and fans, recruitment efforts must intensify to keep high school sports going in our nation’s schools. Apply online at www.HighSchoolOfficials.com and Become a High School Official.