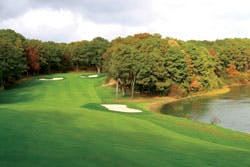 Can a public golf course sponsor a tournament in which only men can play? Since Title IX covers only the realm of public education - that is, colleges and high schools that receive federal funding - a person claiming that such a tournament was discriminatory would have to rely on other federal or state laws.

That is precisely what happened in the town of Dennis, Mass., which owned and operated two golf courses, both of which were open to the public for membership as well as drop-in play. Members were allowed to participate in various tournaments, including two women's events, five men's events and a number of mixed-gender events.

In 2007, Elaine Joyce, a member at Dennis Pines, signed up to play with her father in a members-only men's tournament there. On May 2, three days prior to the tournament, Russell Champoux, the head golf professional, called Joyce's father and told him that while his daughter could not play, he would still be allowed to participate if he found a male partner. Champoux added that he was relaying a decision of the town's Golf Advisory Committee (GAC) to keep that particular tournament limited to men.

The following day, Elaine Joyce e-mailed Robert Canevazzi, the town administrator, challenging the decision. After speaking with Michael Cummings, director of golf and head golf course superintendent, Canevazzi e-mailed Joyce that he was upholding the GAC's decision. In the e-mail, he noted the town's history with respect to men's and women's tournaments, and stated that he did not see a discriminatory practice in the tournament schedule. He did, however, report that he was asking the GAC to consider the issue at its next meeting.

Outraged at being excluded from the tournament, Elaine Joyce filed suit in United States District Court against the town, Canevazzi, Cummings and Champoux. In Joyce v. Town of Dennis [2010 U.S. Dist. LEXIS 31294], which cited both state and federal anti-discrimination statutes, Joyce claimed that the town's policy treated women differently from men.

In her federal claim, Joyce argued that the town's policy violated the equal protection clause found in the Fourteenth Amendment of the U.S. Constitution. On Joyce's basic point - that men and women were openly and officially treated differently - the court agreed, given that, overall, women were afforded fewer tournament opportunities. Next, the court proceeded to analyze the town's justifications for the classification. In order to review gender-based distinction, the court held that the town must show that the challenged classification serves important governmental objectives and that the discriminatory means employed are substantially related to the achievement of those objectives.

In reviewing the federal law claim, the court ruled that the town was responsible for denying Joyce entry into the men's tournament due to the longstanding policy and practice of holding such single-sex events. The town admitted to various factual allegations that refer to a policy and historical practice of limiting certain events by gender. In addition, the court held, individuals with the requisite authority carried out the policy with respect to the tournament.

The court next examined Joyce's state claim. In order to establish a claim for gender discrimination under Massachusetts law, the court held that Joyce must show that the town was involved in creating a distinction based on gender that denied the plaintiff admission to (or related to the plaintiff's treatment in) a place of public accommodation (as defined in two statutes, M.G.L. c. 272, Â§ 92A. and M.G.L. c. 272, Â§ 98).

Joyce argued that the town-owned golf courses are public accommodations that made a distinction on account of gender in excluding her from the tournament and, therefore, the town was liable. The town responded that the text of Â§ 98 required Joyce to show a denial of full and equal accommodations, and there was none.

In rejecting the town's arguments, the court noted that M.G.L. c. 272, Â§ 98 states: "All persons shall have the right to the full and equal accommodations, advantages, facilities and privileges of any place of public accommodation." It does not follow, the court held, that this statement endorses a "separate but equal" exception to the statute's otherwise clear prohibition of gender distinctions or discrimination.

Even if the town was right, however, and the statute allowed a "separate but equal" analysis, the court held that in this case, men and women were afforded unequal playing opportunities under the town's tournament schedule. The court noted that there were 10 days of tournament play for men, compared to only two days for women. The town attempted to justify this by pointing to a lower level of interest from female members. Their justification, however, supported Joyce's argument because the obvious solution was not to schedule 10 days of women's tournaments for uninterested members but rather simply to let Joyce play in men's events.

Absent any persuasive authority to the contrary, the court must look to the statutory language, which prohibits any distinction, discrimination or restriction on account of gender in a place of public accommodation. The town's action in barring Joyce from the tournament fit comfortably within that language, and therefore was a violation of the statute.

Although all program and tournament administrators, even municipal recreation directors, must always be vigilant in avoiding discriminatory practices, it is public and private entities with long histories or traditions of gender distinctions that are usually named in such lawsuits. Beyond feminist Martha Burk's long crusade to compel the Augusta National Golf Club to admit female members, other jurisdictions have been the site of lawsuits similar to Joyce's. In one often-cited case dating from 1993, handball player and attorney Angela Lim sued the men-only San Mateo (Calif.) Elks Club for excluding her from an amateur tournament held there, arguing that the event was public even if the club was not; the case was settled out of court, and the club began to admit women in 1998.

Administrators and the general public have become accustomed to thinking primarily of Title IX in matters of gender discrimination and the law, but as the court's decision in Joyce illustrates, there are other state and federal laws that prohibit gender discrimination. The most important of these, given that not every state offers the same protections as Massachusetts, is the Equal Protection clause of the Fourteenth Amendment. Program administrators should keep in mind that, in addition to gender discrimination, the Equal Protection clause also prohibits discrimination based on race, national origin and a number of other protected classes. Above all, the Joyce decision should send a clear message to program administrators that just because discriminatory practices have been endured in the past, it does not make them legal or constitutional.

One of the victims of a wave of broken-bat incidents that led Major League Baseball to set new bat production standards has sued the league, the New York Mets and Jarden Corp., maker of Rawlings-brand bats. James Falzon was struck in the face during an August 2007 game at Shea Stadium by the severed barrel of a maple bat, which the lawsuit calls "a dangerous projectile." Falzon, who is seeking unspecified damages, says the team, league and bat maker should have done more to protect fans from shatter-prone maple bats. While the league's new standards could raise issues about the standards in place at the time of the incident, the team is likely protected by the courts' longstanding position that spectators attend games at their own risk.

A split U.S. Seventh Circuit Court of Appeals in Chicago has by a 2-1 vote reversed a lower court's 2009 dismissal of a complaint by fans over how the National Collegiate Athletic Association had since 1994 awarded tickets for such events as the Division I men's and women's basketball and hockey tournaments. The lawsuit, George, et al. v. National Collegiate Athletic Association, accused the NCAA of running an illegal "lottery" in its allocation of seats - by forcing fans to pay in advance for tickets they wanted, with sums refunded if they lost out, and assessing nonrefundable service fees for the right to apply. The plaintiffs claimed this violated Indiana anti-gambling and consumer protection laws.

Writing for the appeals court's majority, Judge John Darrah rejected the NCAA's argument that the process afforded fans only an "opportunity" to buy tickets at full price and thus did not constitute a "prize." "Plaintiffs have alleged all elements of a lottery: they paid a per-ticket or per-entry fee (consideration) to enter a random drawing (chance) in hopes of obtaining scarce, valuable tickets (a prize)," Darrah wrote.

The case has been remanded to the U.S. district court in Indianapolis, the home of NCAA headquarters.

24 Hour Fitness is named in yet another class-action lawsuit with the filing this summer of Raoul Fulcher Jr., et al. v. 24 Hour Fitness USA Inc. Already defending itself against charges of illegal business practices and violations of California's Business and Professions Code, the club chain is now hit with allegations of race and gender discrimination with respect to managerial promotions. The suit charges that the chain hires many minority and female employees for entry-level positions but denies them equal opportunity for promotion.