A female member of a mixed-gender golf team tees off on the Massachusetts Interscholastic Athletic Association. 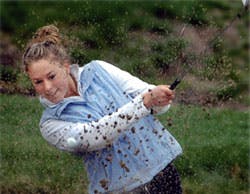 Editor's note: Thomka did not participate in the fall state tournament after 2005. Although schools in Massachusetts can continue to offer golf either in the fall or spring, as of 2007 the MIAA no longer offers a boys' state tournament in the spring.
Sign Up for AB Today!
Get industry news, insights, and new product information delivered straight to your inbox.
Read Next