A dispute over photographs taken at state tournaments is affecting how Illinois newspapers cover interscholastic athletics. 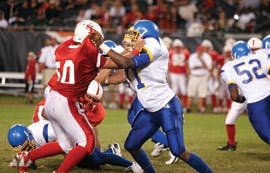 Not every newspaper reader in Illinois noticed the lack of photographs from the state high school wrestling and girls' gymnastics finals in February. But their absence - the result of some papers protesting the Illinois High School Association's requirement that photographers sign an agreement that restricts the use of pictures they take - could have a profound impact on the way the print media covers state interscholastic athletic tournaments. It also upped the ante in a bitter battle over freedom of the press as it relates to digital media.

The controversy stems from an agreement the IHSA has with Visual Image Photography Inc. that grants the Wisconsin-based firm exclusive rights to the commercial use of photos taken at IHSA-sponsored events. In exchange, VIP provides hundreds of thousands of photos to the IHSA every year for free.

IHSA officials claim newspapers posting photo galleries - often containing hundreds of images from tournament play - and then selling copies to parents and other fans undermines the value of the association's contract with VIP. Therefore, the IHSA has denied media access to photographers who refuse to waive their rights to secondary use of the photos, defined by the association as anything beyond a traditional print newspaper story.

The Illinois Press Association begs to differ and has filed a lawsuit against the IHSA. At the same time, two separate bills breezed through committees in the state Senate and House of Representatives that, if passed, would prevent organizations such as the IHSA from regulating how newspapers use photos taken at sporting events. As of this writing, both bills were working their way toward a full Legislature vote, with the lawsuit still pending.

"What we are asking the Legislature to do is to allow newspapers to do what they have always done for at least a century without interference from any governmental or quasi-governmental entity," says Dave Bennett, executive director of the IPA. "The bulwark of our very existence is our relationship to our communities, and the IHSA seeks to control that relationship for its own commercial purposes. That's just wrong."

Amid calls from media advocates around the country to boycott all Illinois high school sporting events, newspapers in the state were forced to go on the defensive, explaining their predicament to readers. The IHSA "should not be allowed to deny others the right to photograph competitions between publicly funded schools at public arenas," wrote Timothy J. McNulty, public editor of the Chicago Tribune, which initially boycotted the wrestling and girls' gymnastics finals before establishing a policy that Tribune photographers denied future press access would buy general-admission tickets and take photos from the stands. McNulty added that "selling copies of photos is more a reader service than a business" for the Tribune.

The IHSA fired back, dedicating a section of its web site to the topic and posting a lengthy announcement headlined, "Information You Won't Find in Most Illinois Newspapers About the Photo Dispute." The issue "is not one involving the First Amendment or freedom of the press," the site states. "The law is clear that 'freedom of the press' does not extend to protect the commercial use of photographs, nor does it protect a publisher's ability to profit at the expense of others."

Not so fast, warns John Wolohan, professor of sports law and chair of the Sport Management & Media department at Ithaca College. "That's a pretty broad statement, and it's clearly not true," he says. As proof, he cites the 1995 case, Montana v. San Jose Mercury News Inc., in which the San Jose Mercury News sold posters containing reproductions of a photograph and an artist's drawing of NFL quarterback Joe Montana that appeared in the paper after the San Francisco 49ers won their fourth Super Bowl of the decade. Montana sued, asserting his publicity rights had been violated, but the California Court of Appeal found the newspaper's use of the images to be protected under the First Amendment.

Reprinting photographs featured in an online gallery of a newspaper's web site for commercial purposes is no different than reprinting images that appear in the paper itself, Wolohan adds. "If I were at the newspapers," he says, "I would make the argument that the web is just an extension of the paper: 'This is what we do now. We've moved beyond print media.' "

Similar disputes have occurred in Alabama, Arkansas, Louisiana and Wisconsin in recent years. At least one ended with a retreat by the high school athletic association, while another state association has, at least temporarily, suspended enforcement of its secondary-use policy.

The Louisiana High School Athletic Association lifted its restrictions in time for the 2007 girls' basketball tournament. "We've backed off," LHSAA commissioner Tommy Henry said during a press conference announcing the decision. "We don't want to keep photographers from doing their jobs. They can take all the pictures they want and use them the way they want to use them."

The Wisconsin Interscholastic Athletic Association, meanwhile, stopped sending cease-and-desist letters to newspapers in violation of its policy on commercial secondary use of photographs and lifted its $100 licensing fee for unlimited use of images taken at regional and sectional competitions. WIAA officials are waiting on the outcome of the lawsuit and legislation in Illinois before determining what to do with their own policy, according to Todd Clark, communications director for the WIAA.

He says that at least twice in the past year, the organization has met with representatives from daily newspapers around the state, as well as representatives from the Wisconsin Newspaper Association, to discuss this issue, and he hopes to reach an agreement without having to get the state government or courts involved. "We've already made a compromise," Clark says. "It might not be enough for some people, but it hasn't been for lack of trying. It's a good first step, if nothing else."

Clark admits that the issue is one that shouldn't keep the WIAA and other state associations from carrying out their original missions. "It's not worth losing sleep over at this point," he says. "We do believe that the photos are our intellectual property, and that the papers are trying to get financial gain. But do you fight somebody who buys ink by the barrel?"

The ramifications of denying media access to photographers could be many - most notably, potentially reduced coverage of high school sports (not just tournaments) by the print media. There are no easy answers, Wolohan says, and there are several elements at play here.

"The problem with photographs is not just freedom-of-the-press issues," he says. "There are also copyright issues to consider. If, for example, I take a photograph at a game for a newspaper, the newspaper owns the copyright, and as copyright owner, it has an exclusive right to determine how that photograph is distributed."