The Toronto police have charged Ken Pagan with one count of mischief for allegedly throwing the beer can that narrowly missed Orioles outfielder Hyun Soo Kim at the American League wild card game played in Toronto on Wednesday, though speculation about whether he is really the offender continues.

Video evidence from the field shows the can being ejected from a section of stands full of blurry spectators all in blue. By zooming in on the action, the can does seem to come from the exact spot where Pagan was standing. However, other photos show him in the stands drinking from a cup. 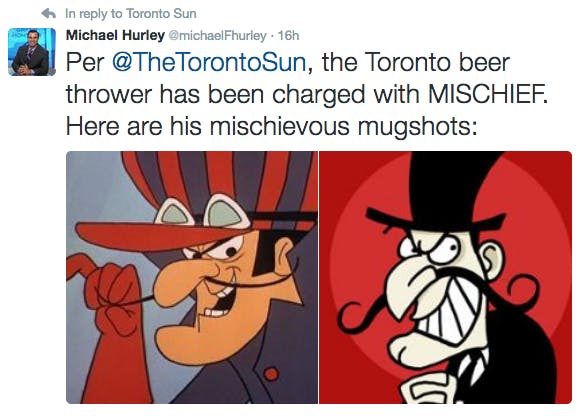 In an interview to the Toronto Sun, which is owned by Postmedia where Pagan works as a copyeditor, Pagan points to the photos as evidence that he could not have thrown the can. All the same, there can be no doubt that it is Pagan’s picture that was released by the Toronto police with a call for information regarding the incident. Following its release on social media, Pagan contacted police and reported to the precinct. He is due to appear in court in late November.

If deemed responsible, Pagan could face civil action for assault and battery, as well as criminal charges for mischief that could result in fines, probation or possibly jail time. He will almost certainly be barred from Rogers Centre for a year or more.

If police have made a mistaken identification, they have open themselves up to a lawsuit for defamation. Police spokeswoman Meaghan Gray is not worried about that possibility. In an interview to ESPN, Gray told reporters “We are confident we have made a positive ID, and we will continue to work with the Rogers Centre to further the investigation.”

Pagan has sought legal counsel and is preparing his case for the courts.