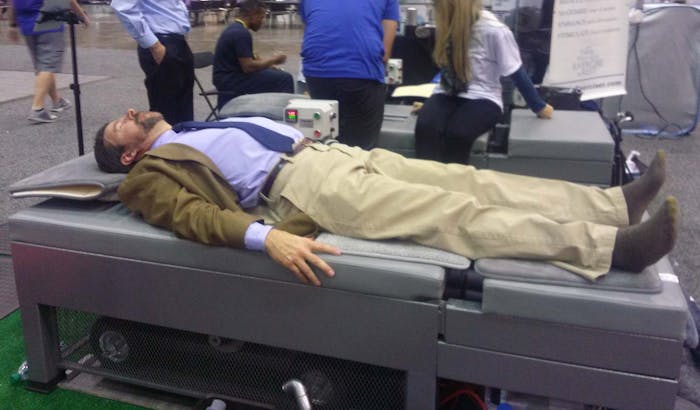 I was three weeks shy of 50 years and feeling every minute of it on Day One of the AB Show in Orlando two weeks ago. Within eyeshot of the Athletic Business booth was some equipment I had not seen before — boxy rectangular tables that people were laying on, face up. Upon closer inspection, the tables featured a rectangular opening filled with what appeared to be two rows of piston-like vertical rods (actually interchangeable tubes with caps on them) positioned to align with either side of the user’s spine.

When at the AB Show, I like to try things — especially things that show the potential to erase the pain of a full day on my feet. Several years ago, I bought a massage chair based on an AB Show demo, and haven’t regretted it for a second.

This equipment — called the Rikian Exerciser™ — looked more utilitarian, almost primitive in its simplicity. I had to experience it. I laid down and put my hands over my head with fingers outstretched as instructed. An Australian chiropractor named Ian Reinbott pulled on my arms and attempted to put my hands together. The fingertips of my left hand touched the top of my right palm. If that weren’t eye-opening enough, my right leg was more than an inch shorter than my left. Ian explained that tightness on the right side of my back was causing the disparities. Then he cranked up the machine.

The word “invigorating” falls way short in describing the sensation of being pummeled from underneath by those pistons — a process termed “biomechanical muscle stimulation.” I was shaken from head to toe. The five-minute demo session ended, the vibration stopped, and I was left with a feeling of near euphoria. Ian grabbed my wrists and repeated the overhead test. Fingertips matched perfectly. On the other end of the table, he gently knocked my ankles together. Even Steven.

“Come back tomorrow,” Ian said, “and we’ll give you a more intense session.”

“To really break up the scar tissue.”

I felt great the rest of that first day, and gladly returned for phase two. Tubes were replaced with longer ones. Gone was the padded mat that had separated those tubes from my back the day before. I was starting to wonder if I could take what was coming. The on button was pushed and the pummeling began anew.

My AB colleague Emily Attwood was on the table to my left, and I heard one of Ian’s assistants tell onlookers, “See how his body is shaking more than hers? That means his body is more stressed.” No argument there. I was jiggling like that kid’s Jell-O when she sees a dinosaur enter the cafeteria in “Jurassic Park” — to the point I hoped no one was capturing my latest ordeal on video. Alas, Emily’s session ended in time for her to snap a still photo of mine.

“Ordeal” isn’t the right word, of course. I loved every minute of it. I even gained an appreciation for the concept of “melting into” the machinery, as the demonstrators described it, as the most violent shaking gradually subsided over the course of my second session. In fact, sessions in physical therapy and training settings for which the equipment is designed typically last much longer, my new friends told me. “This is changing people’s lives,” said one demonstrator, who has a table in his own facility. “That’s what it’s all about,” I said.

The technology dates back to the 1970s and the former Soviet Union, which used BMS to foster unparalleled flexibility in elite athletes such as four-time Olympic gold-medalist Olga Korbut (gymnastics). Reinbott and partner Dr. Ricardo Kauffmann introduced their BMS-inspired product to the general public in 2015 after four years of testing.

I didn’t leave their booth with delusions that I could suddenly do a backbend on the balance beam, but I felt like I could conquer another four hours on the AB Show floor. There ought to be a medal for that.