In an analog world, putting together a sports tournament could be a logistical nightmare. Between collecting all of the necessary paperwork, praying that checks come through and building a workable tournament bracket, event organizers could put in plenty of late nights — even before the event begins. And should weather or an unforeseen event force a late-breaking change? Chaos.

While some tournaments no doubt still rely on pen-and-paper methods — they no longer have to. Like many things these days, when it comes to running successful sports tournaments, there's an app (several, in fact!) for that.

TeamSnap is one of a growing number of technology providers whose solutions are being used by sports tournaments. "Anywhere that there's chaos and we see it in the sports arena, we know that we can thrive," says TeamSnap direct media manager Evan Williams.

Here's a look at how apps and software solutions are helping event organizers create order, and get a bit more sleep, while planning their tournaments:

Registration reimagined
Williams, who still participates in sports tournaments run the old-fashioned way, says digitizing the registration process can help to eliminate a lot of paperwork — and the hassle that comes with it.

"When I drive up to [the tournament] the day before, as the captain, I say 'Here's our final roster, literally written on paper, here's our player cards so you can check them, here's a check, and here's all the waivers that you wanted us to sign,' and I literally hand them a packet of papers," Williams says. "And they throw that in a file somewhere and eventually shred it."

Instead, software allows participants to fill out the information remotely and well in advance.

"Then, as a coach or a player, I don't have to worry about that when I show up. It's all done," Williams says. "I'm not carrying a folder around at the park when I show up, and I can just focus on what I'm there for — which is to play."

Apart from cutting down on paper, software providers allow tournament organizers the flexibility of collecting whatever information they need via customizable online forms.

Another benefit of app-assisted registration is the ability to retain the information within a system. "It's kind of like a frequent-shopper program," says Andrew Brauer, head of sales with SportsEngine's Tourney Machine of the Tourney Team registration tool. "When they go into a registration page they don't have to type in the team name, contact information, roster every time. Instead, they just select from the list of teams that you have, and say, 'Hey, I'm registering this team for this tournament,' and then all that information is carried with it."

Software-based registration tools also provide tournament organizers with more ways to collect payment. Teams registering for their spot in a tournament have the option of paying with cash, check or credit card.

"[With credit card payments] we will collect those funds for them, process it, deposit it in the bank account for the tournament director immediately," with transition usually taking one to two business days, says Brauer, adding that the ability to process credit cards can help remove some of the risk inherent with cash or check payments. 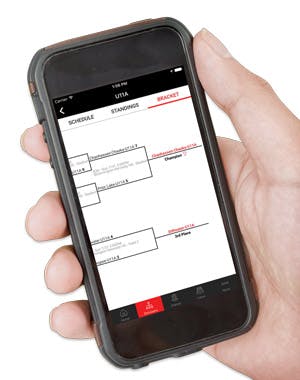 Planning and scheduling
Chip Hofler is the vice president of North Carolina Amateur Sports, the organization that puts on the annual Powerade State Games of North Carolina, an event for amateur athletes sometimes referred to as North Carolina's Olympic Games, complete with opening ceremonies and the lighting of a cauldron.

Hosting 13,000 athletes participating in 24 different sports each June is an incredible feat for Hofler's team, which includes just five full-time staff members. "I remember when I was running the State Games in '06, we had 200 soccer teams in one of our tournaments that year, which was nuts," Hofler says. "And I distinctly remember being up 'til midnight or 1 a.m. hand-working on the schedules. You were literally moving each thing around, and copy-paste and all this different stuff to figure out what fit."

Those days are over for Hofler, who now employs TeamSnap for his tournaments. "It's so much easier to use and so much quicker to do."

"The old way, you'd probably have a spreadsheet, you'd have each team listed, you'd have all your courts or all your fields listed and you would black out sections," says TeamSnap's Williams. "Very stressful, very tedious."

Most tournament software will offer some sort of tool to help build out a bracket or formulate pool play, and what makes these features really shine is their ability to incorporate and account for any restrictions.

"Maybe you've got some teams coming in from way out of town for a Friday, Saturday, Sunday tournament," says John. "Block that team out, and it'll make sure they don't get scheduled on that Friday night and they don't have their first game until Saturday morning."

Likewise, field and court availability and limitations can also be accounted for with scheduling tools. Perhaps there are periods of time when a tournament can't use a particular facility, or you have a limited number of facilities to work with.

"You can do it from both ends — the team and the facility," says Hofler. "It won't allow me to schedule the facility when it's not available, as long as I create that restriction ahead of time."

"There are going to be some inputs that you put into the system, and then from there the system can help you generate the desired output, which is the completed schedule," Brauer says.

Tournament software also typically provides a variety of different tournament formats, even allowing for custom formats. Says Brauer, "We have those bracket templates already built out, where you can either use them as is, you can modify them, or you can build your own bracket from scratch where it's completely unique."

"If there's any communication that needs to happen at the administration level down to the coach, they can do that swiftly and easily, either in bulk or directly to each individual through the app," says Williams. "So you're really minimizing how much you have to communicate and then making the communication much easier when it does have to happen."

Software allows for users to opt-in to receive notifications, which can be sent by tournament directors in a variety of ways — email, text message or even push notification (messages that pop up on a mobile device that are specific to a particular application). Users who opt in can typically choose to receive updates related to a particular team, or a specific tournament event. Tournament directors can break out who needs to know what information and choose to only notify affected teams.

"As an example, take an outdoor tournament. Maybe it's a baseball tournament or soccer tournament," says John. "It starts raining and you need to take a block of games and reschedule them to another day, or later on in the day, or a different field, or move something from outside to inside. You can do that pretty easily and notify everybody involved."

"It's all about getting timely information," Hofler says. "It makes it much more convenient for the participants in terms of knowing when they have to play, knowing if there's a change they will be notified right away."

Directors and organizers who leverage the technologies available today will more easily achieve the ultimate goal of any sports tournament: a valuable experience for all participants. Whether it's smoothing out registration, building the schedule in a quick and accommodating fashion, or simply communicating more clearly, apps and software tools have become essential to pulling off successful events.

"It's just a lot more streamlined, a lot more convenient for people to follow along," Hofler says of leveraging TeamSnap in his event. "And that way, they're going to want to come back."

This article originally appeared in the April 2019 issue of Athletic Business with the title "Software's role in running successful sports tournaments." Athletic Business is a free magazine for professionals in the athletic, fitness and recreation industry. Click here to subscribe.