The National Hockey League plans to use technology to track pucks and players this season.

“Everything that could be used against you, it could also be used for you,” Winnipeg Jets forward Pierre-Luc Dubois told the AP.

Teams will use the data generated by pucks and sensors to develop players and scout opponents. Passing, puck possession, takeaways, giveaways and more can be accurately recorded without the potential subjectivity of a scoring crew in an arena.

The NHL tried to track pucks in January, but they didn’t slide right. The league took them off the ice six days into the season.

TV networks will display and talk about some of the information on broadcasts and studio shows.

“We have to make sure the data is used in the right context,” said former NHL player Anson Carter, now an analyst for Turner Sports. “We all know (Colorado center) Nathan MacKinnon is fast and if the data says he’s going nearly 40 mph, I’d use it if it showed that two or three other players were perhaps 7 mph slower and integrate it into an analysis to hammer home a point.”

Fans will be able to see information like how fast players skate and how hard they shoot. They’ll also be able to choose options that will show the data on an overlay as they watch on a big, medium or small, handheld screen. Some details were announced earlier this year.

Gamblers are expected to be able to wager on a new wave of bets at some point down the road.

“This is going to re-engineer the hockey-better experience, which to put it politely is sub-optimal because it’s all about game outcomes,” NHL vice president of technology Keith Horstman told the AP. “It’s exciting that this data is going to lead to in-play betting. But, it’s going to take some time to figure out what fans care enough to bet on and how the odds and probability will work. We’re working on it and I’d like to say it will happen this season.”

The NHL regular season began Tuesday night. The Tampa Bay Lightning lost to the Pittsburgh Penguins, 6-2. The Vegas Golden Knights and the Seattle Kraken, two of the NHL’s newest teams, faced off. The Knights overtook the Kraken 4-3. 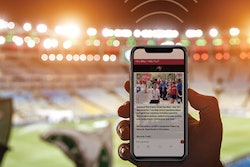