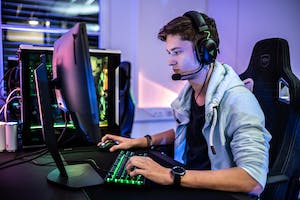 A venture-backed eSports startup has been accused of attempting to coerce the Washington State Scholastic Esports Association to stop hosting matches for games owned by Nintendo and Activision Blizzard.

PlayVS sent an email to WSSEA falsely advising that it holds the sole licenses to host tournaments for games made by Nintendo and Activision Blizzard.

“It’s come to our attention that WSSEA is currently operating ‘Mario Kart’ and ‘Overwatch’ and operated [‘Super Smash Bros.’] this past Fall. These are three titles that we reserve official/exclusive rights,” read the email, according to The Washington Post. “Given this, we’ve notified our partners and ask that you cease operations, plus remove mentions from your website and marketing.”

PlayVS has been a point of contention for schools, which have refused to partner with the company, as the high school esports platform charges $64 per student per season. Teachers and educators allege that PlayVS is attempting to strong-arm school programs into subscribing to the service as the company attempts to become the sole provider of interscholastic high school esports.

According to The Post, which obtained emails sent by PlayVS, the company has contacted at least five statewide nonprofit esports organizations in January to request that they cease school-vs-school competitions for certain games because PlayVS has “official/exclusive” licensing with both Nintendo and Activision Blizzard. That claim, however, is inaccurate according to the two game publishing companies.

Nintendo said that its licensing agreement with PlayVS is not exclusive, and Activision Blizzard said that PlayVS is the only organization with partnerships in high school sports that has “applied for customer license” but that other high school programs can apply, if they wish.

“An Activision Blizzard representative later clarified that other organizations would simply not be able the stage or frame the competition as a state varsity championship, similar to those administered by the National Federation of State High School Associations (NFHS), a rulemaking body in scholastic sports and another PlayVS partner. Both publishers sent written statements to The Post and declined to be interviewed for this article.”

Jason Dilley, a high school teacher and the executive director WSSEA, said PlayVS’s antics are “all just misinformation that’s going out to give the appearance of exclusivity.”

Esports is plagued by licensing challenges, as the companies that publish the games can actually control how they’re played. At present, PlayVS is the exclusive high school esports provider for the popular game “League of Legends” through a deal with the publisher Riot Games. As such, esports program coordinators are unable to hold “League of Legends” tournaments without going through PlayVS.

In February, PlayVS CEO Delane Parnell offered Garden State Esports in New Jersey access to PlayVS free of charge if the nonprofit moved all of its competitions under PlayVS. Chris Aviles, a teacher and founder of Garden State Esports, declined the offer.

“This is not a decision we came to lightly,” Aviles wrote in his reply to Parnell. “This morning I told the league that we would be canceling the [League of Legends] season … the kids were devastated.”

“If one company is the only company that can offer the most popular game in the world at a scholastic level, either you go with that company or you don’t play that game,” said Jim McKowen, a math and computer science teacher at Hopatcong High School in New Jersey. “Those are your only options.”

PlayVS, which started in 2018 and has since raised more than $106 million in venture capital, holds commercial licenses for nine games. The company also contracts with NFHS’s streaming network for its esports competitions.

In a 2021 article published in Inc. Magazine, PlayVS CEO Parnell said, “We won’t be happy until we have adoption at literally every high school and college in the country.” Parnell told The Post he believes his company has created the best platform on the market for scholastic esports and Parnell wants PlayVS to become the software that powers all amateur esports competitions — not just high schools.

Educators feel they’re being railroaded into working with PlayVS.

“There is 100 percent space for all of us at the table,” Aviles said. “The problem I’m having is that PlayVS rushed to get their seat at the table and now they’re pulling up all the seats.”