The University of Nebraska is close to a 15-year $300 million media rights contract with Playfly Sports, which the school says will allow it the best chance to respond to the quickly changing nature of college athletics.

The deal is subject to Nebraska Board of Regents approval at its meeting Sept. 30.

“I was really impressed with their innovation and entrepreneurial thinking,” said athletic director Trev Alberts of Playfly, according to 24/7 Sports.

The deal includes an average $18.2 million guarantee to the athletic department over the life of the contract, with the initial payment during the 2023-24 fiscal year coming in at $13 million, and increasing to $23.2 million in the final year of the deal in 2037-28.

Playfly will also pay a $7.5 million signing bonus in three payments over the life of the contract. Other provisions of the deal include:

“We think this is going to be a great, long-term partnership, but as we know, things happen quickly and change quickly and having an opportunity to look in at year nine is very important to us,” Alberts said.

Prior to signing with Playfly, Nebraska had brought its media right in-house under previous athletic director Bill Moos. As a result, the school did everything from selling its own ads to managing its own radio network.

“Having an internal plan, not only do you have all the expenses associated with it, but there are limitations that are naturally part of the NCAA,” Alberts said.

Playfly also has deals with Michigan State and Maryland. 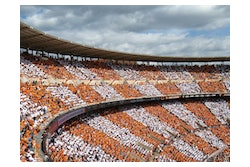 Officials from the Big 12 Conference told Pac-12 officials Monday that they're no longer interested in exploring a partnership that has been the focus of discussions for two weeks, sources told ESPN.
July 19, 2022
Page 1 of 75
Next Page
Buyer's Guide
Information on more than 3,000 companies, sorted by category. Listings are updated daily.
Learn More
AB Show 2022 in Orlando
AB Show is a solution-focused event for athletics, fitness, recreation and military professionals.
Learn More