Kickball Growing in Popularity for Adults

A familiar schoolyard game resurfaces as an adult recreation program 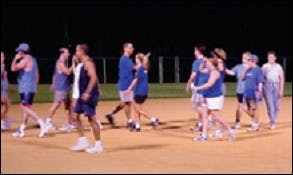 It takes only one mention of the childhood game to send Christi Moeller into giggles, followed by fond remembrances of playing kickball as a sixth-grader in northwest Missouri.

"We'd go out on the basketball court and play kickball in the snow," says Moeller, program coordinator for the City of Edgewater (Fla.) Leisure Services Department. "I had a young, tall German man for a teacher - Mr. Olhausen. I remember he'd get out there and play with us, and one time, he even went down in the snow and had it all over him. It was just a lot of fun. Good memories."

So fond were those memories for Moeller that when she read a news article this past summer about the popularity of adult kickball leagues in Washington, D.C., and elsewhere, she decided to start one in her area. This fall, four coed teams of roughly 15 players each competed in Edgewater's first adult kickball league. Because games were played on softball diamonds, Edgewater's rules blended elements of those used by the Amateur Softball Association and the Washington, D.C.-based World Adult Kickball Association (WAKA). Although the rules were designed to maintain a fun atmosphere, Moeller says that out of necessity, they were somewhat more structured than those used by children. "People really like to have rules. That was kind of surprising to me," she says. "It's a little different than when you're out on the playground. You have less freedom when playing adult kickball."

Despite that fact, Moeller says that program participants thoroughly enjoyed themselves, particularly those looking for a sport with which to remain active without risking serious injury. "The people to whom it really appeals are age 40 and over," she says, adding that the league's oldest player was a 76-year-old woman. "They want to do something where they can go out and have fun with their peers, but without the high competition of something like coed softball. Personally, I don't want to get hit in the face or shin with a hard ball. In kickball, we're playing with a 10-inch red rubber ball. It's not going to cause you a lot of physical harm if you get hit with it."

And because it is a game familiar to virtually anyone who attended elementary school prior to the '90s, playing and even excelling at kickball doesn't require years of practice or training. Setting up a league is just as simple, says Keith Flournoy, recreation coordinator for the Oak Park (Mich.) Recreation Department. "You get a ball. You get some bases. You put your teams together and you get your fields. That's just how easy it was for me to get going."

Now just wrapping up its second year, Oak Park's kickball league - a joint venture with recreation departments in neighboring Ferndale and Southfield - offers both summer and fall seasons. This past summer, the league fielded 14 teams for a 12game season plus playoffs, and in the fall, six teams participated in a 10-game season. Flournoy says that space and time limitations forced him to turn away some would-be kickballers both seasons, but the demand has him expanding next summer's offering to 20 teams. "I could do 30, but we don't have the facilities to accommodate that many teams," he says.

To cover the costs of awards and officials, Oak Park's league charges $250 per team, which for a team of 20 players works out to about $12 per person. Flournoy initially considered joining WAKA as an affiliate division, but decided against it because the cost to participants would have been significantly higher.

WAKA has divisions in Washington, D.C., Baltimore, northern Virginia and San Francisco, and will expand to Chicago, New York and Atlanta next spring. This year, the $60 fee paid by each of WAKA's nearly 4,000 participants covered membership to the organization, T-shirts, game equipment, field rental, liability insurance, administrative costs and awards. But according to chief operating officer Jimmy Walicek, WAKA is currently developing a special program that would allow affiliates to customize their level of membership depending on their existing resources, thus lowering their out-of-pocket expense and eventual cost to participants. Walicek believes that limited affiliation would make the best sense for park and recreation departments, most of which already have insurance, game equipment, fields and the ability to run athletic leagues.

Although Walicek hopes the program will attract recreation departments, he knows that some agencies will opt instead to go their own route. Even still, he welcomes recreation professionals to consult WAKA for advice when questions on kickball rules or other matters arise. "I think we all have the same goal, and that is for people to go out and have some fun," says Walicek. "As long as people reference our rules appropriately, we don't have a problem. Plus, this gets the word out about our program."

In the Edgewater league's early stages of development, Moeller - like Flournoy - consulted representatives from both WAKA and the Milwaukee-based Midwestern Unconventional Sports Association (MUSA). In the end, Moeller decided to adapt WAKA's rules instead of MUSA's because she says they appeared to be drafted by legal professionals and were thus better suited to a government entity. Although, Moeller adds, "MUSA is much more casual, which I really like."

That laid-back approach has been a key reason for MUSA's growing popularity, says Joe Szatmary, the association's founder and commissioner. The mission of the two-year-old nonprofit organization, according to its web site, is to provide social opportunities for people who don't take sports "too seriously." "If a person can't brush off a close play after the heat of the moment, that's not really the type of person we're looking for," says Szatmary.

The kind of people MUSA is hoping to attract, though, do have two things in common: adult status (leagues are 18and-over) and a desire to rediscover their inner child. MUSA's strategy is working, as people are coming out to play in droves. After starting with one six-team league in Milwaukee, kickball has become MUSA's mainstay (it also has leagues for dodgeball and broomball). Leagues have sprouted in two other Wisconsin cities and Bloomington, Minn., for a total of more than 150 kickball teams with 2,600 participants in all four cities. Expansion efforts are currently under way in the Twin Cities and Chicago metropolitan areas.

Although MUSA, like the recreation departments in both Edgewater and Oak Park, seeks to offer adults a novel recreational outlet, it differs from those entities in its stance on the role alcohol should play in league events. "First and foremost, I consider this to be a social club," says Szatmary. "The sports aspect is not the be-all, end-all for us. It's a reason for people to get together." Accordingly, MUSA encourages its participants to enjoy themselves, and if for them that requires the presence of alcohol, so be it. Players are allowed to drink during games. Local bars often sponsor teams with names like "Drinkers With a Kickin' Problem" and "The Mighty Lushes," and MUSA's web-site message board is packed with invitations to post-game parties that are usually held at those bars.

While he acknowledges that it's unlikely most recreation departments will see eye-to-eye with MUSA on this issue, Szatmary says that his organization has never had any problems renting city fields. In fact, in at least one city, MUSA's basic field-rental relationship may eventually blossom into a more advanced partnership. "Bloomington seems very interested in collaborating with us," says Szatmary, acknowledging that for the partnership to succeed, the on-field drinking may have to be sacrificed. "I wouldn't see any problem with that. The bottom line is maintaining a fun context."

Walicek agrees, but doesn't think the alcohol issue should be that great of a concern. "I don't see anything wrong with people going to the game and then an hour later, meeting their friends at the bar," he says.

An Oak Park ordinance against bars within city limits already has kickball league participants heading elsewhere in search of post-game libation. "Oak Park is a dry city, but we also play in Ferndale, which is very much a bar town," says Flournoy. "People will bring beer out to the games there, but I tell them it's not allowed here."

Flournoy maintains that stance because his ultimate goal for the Oak Park kickball league is to provide residents with an activity that promotes healthy living. Flournoy, who sits on the Michigan Recreation and Park Association's athletics committee, is presenting a workshop on adult kickball at the MRPA's annual conference in February. He hopes to hook other Michigan park and recreation departments on the concept and depending on the response, plans to host a statewide kickball tournament in Oak Park next summer.

Flournoy doesn't anticipate it'll be a hard sell. "We've got people playing who normally wouldn't be participating in any recreation activity. My wife, for example - one of the least athletic people I know - saw that I was doing this, came out and is playing now," he says. "It offers people an opportunity to get involved in something that isn't normally offered to them. That's what I like about it most of all. And the response when I mention kickball is always something like, 'Man, I haven't played that since I was a kid.' "