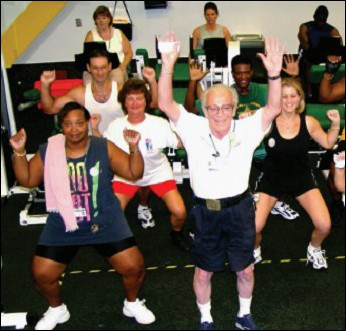 In 2001, only 69 athletes participated in the Palm Beach County (Fla.) Sheriff's Office's annual Olympic Games-style competition, which is open to the organization's 3,100 employees. This past November, that number jumped to 177 athletes competing in 19 events such as basketball, swimming and even bowling over a two-day period, culminating in the crowning of the "toughest cop" and "toughest civilian."

The popular event is part of the agency's "Get Fit-Stay Fit" plan, a multifaceted education program for sworn and non-sworn employees and their families.

Other components of the "Get Fit-Stay Fit" program include a smoking ban for all employees, free physicals for deputies over 35 years old, and new or renovated fitness centers at the department's five locations - including a 24-hour, state-of-the-art facility at department headquarters that opened in January 2001.

"We're in the business of public service, and it's our responsibility to be physically fit. That's just as important as teaching someone how to go in hot pursuit," says Cpl. Stan Bullard, training officer and fitness specialist at the Palm Beach County Sheriff's Office. He credits Sheriff Edward Bieluch, whose term began in 2000, with the department's strong emphasis on fitness. "We could easily have had a new sheriff come in who didn't want to upgrade our facilities. But Sheriff Bieluch is a fitness advocate and he works out, so he knows the importance of this."

So, apparently, do an increasing number of officials at law-enforcement agencies around the country, where physical fitness is considered essential in helping cops cope with stress and perform tasks ranging from paperwork to non-lethal combat. After all, an officer's daily grind is often a sedentary one, with opportunities to actually chase bad guys few and far between.

North of Palm Beach County, officials at the Winter Haven (Fla.) Police Department recently spent a $26,000 local grant surplus to equip a police station with updated fitness equipment - including specialized machines for female officers. And in Chicago, $2.5 million has been budgeted in 2003 to reward police officers who successfully complete a voluntary but strenuous police-academy fitness test. A similar one month program last October paid $250 each to 3,700 or so of the department's 13,500 sworn officers who passed the test. Only about 100 officers failed.

Even firefighters, who live in extremely structured firehouse environments that make it easier for them to live healthier lifestyles than police officers and sheriff's deputies, are striving to enhance their already solid image. The Tacoma (Wash.) Fire Department, for example, hopes to save $200,000 a year in sick leave by implementing a fitness and wellness plan using grant money and department funds.

But all this is not enough, contends Dell Hackett, a retired sheriff's deputy and now president of the four-year-old Law Enforcement Wellness Association in Elmira, Ore., a resource center dedicated to improving the physical and psychological health of the nation's police and sheriff personnel. Hackett contends that too many cops embody the donuts-and-coffee stereotype - "We hear that one a lot," says a veteran of one big-city police department - by being too fat and living unhealthy lifestyles. Bullard, for one, says he knows of few other sheriff's departments in the United States that offer the same range of fitness and wellness services as Palm Beach County, and no other law-enforcement agency in the state last year sponsored Olympic-style athletic events or department-wide smoking bans.

Consider this: According to the LEWA, suicide, divorce and alcoholism rates are higher among law-enforcement personnel than current national averages. The lethal combination of monotonous shift work, sleep deprivation, high stress, poor diet and irregular exercise often results in early death. A 40-year study of police-officer mortality rates at the University of Buffalo revealed that the average age of death for a law enforcement officer is 66; the U.S. Centers for Disease Control and Prevention peg the life expectancy for an average person at a full 10 years longer. "Watch the news," Hackett says. "When there's a group of cops on television, just look at them. Those guys probably don't meet any fitness standards."

In many cases, there are no fitness standards to be met, as there is no governing body ensuring that law-enforcement personnel are held to specific physical fitness standards. Once someone graduates from the police academy, he or she has a good chance of never having to pass another fitness test again, says Hackett, who wasn't even encouraged to work out on his own time - let alone on department time - when he wore the uniform. "If you do a telephone survey of 2,000 people asking if their local police department has a fitness standard, I bet you'd get a high percentage of citizens who think it does," Hackett says. "But it probably doesn't."

Health clubs have been providing discounts to local men and women in uniform for years, touting the important role physical fitness plays in combating stress while providing a public service to their communities at the same time. Some of the discounts themselves are fairly healthy. For example, TNT Total Fitness in Aberdeen, N.J., operated by Nick Metrokotsas, a former telecommunications employee who once worked in the south tower of the World Trade Center, provides half-price "heroes' memberships" to all police, fire and armed forces personnel.

But even the lure of favorable discounts can't always change behavioral patterns. The key to ensuring a physically fit force is education - a topic that's generated more interest in the wake of 9/11, which thrust the physical capacities of police officers and firefighters into the national spotlight.

"9/11 brought to life the criticality of readiness," says Roger Reynolds, director of contract relations for The Cooper Institute for Aerobics Research, a Dallas-based research and training facility that has worked with law-enforcement agencies (including the New York Police Department) since 1976. "Police officers have got to be ready for everything, and they cannot be ready for everything by sitting on the couch. They may never be required to run as fast as they can for longer than two minutes. But if they are, they've got to be able to do it. When they are required to do something in the job's darkest hour, they'll be thankful they're physically fit."

Both The Cooper Institute and the Federal Law Enforcement Training Center - a Glynco, Ga.-based arm of the Department of Homeland Security that provides training to members of more than 70 federal agencies, plus several state and local authorities - report increased interest in their programs since the Sept. 11 attacks. "We used to have people who were quite a bit more fit than the average person," says Cheryl Hoskins, chief of FLETC's Physical Techniques Division, which provides extensive instruction in arrest procedures, self-defense, personal health and physical fitness. "Now, they're coming in in all shapes and sizes. People are finally realizing that fitness, especially in law enforcement, is critical."

FLETC provides basic training for thousands of law-enforcement personnel every year, submitting each individual to a five-part Physical Efficiency Battery that includes flexibility, cardiovascular-endurance, agility, strength and body-composition tests. The center also offers an 80-hour physical fitness coordinators training program for federal, state and local officials who want to arm themselves with the tools to teach fitness and wellness in their own agencies.

If individual agencies implement fitness programs with a mandatory standards and testing component - meaning that an individual will not be hired or will be fired if a certain threshold of fitness is not maintained - legal issues become paramount. "In the past, fitness was used as a vehicle to discriminate," says Reynolds, citing the Civil Rights Acts of 1964 and 1991, the Americans with Disabilities Act and the Age Discrimination in Employment Act. "It does separate those who can from those who cannot."

But if job relatedness is established and documented, then fitness tests, standards and programs can - and should, officials at FLETC and The Cooper Institute argue - be used to determine who can and who can't. Furthermore, law-enforcement agencies also assume a certain degree of liability regardless of whether they provide safe tests, standards and programs. In 1988, the Washington (D.C.) Metro Police Department was found negligent for not having a fitness requirement. An officer, who had not undergone physical training for four years, was involved in a confrontation with a man wanted for armed robbery. The encounter turned deadly, and the robber's family sued the department for lack of officer training, claiming that had the officer been fitter, he wouldn't have needed to resort to his weapon. The department paid the family more than $425,000 in damages.

The New Jersey State Police Department since 1985 has required every officer to take a physical fitness test, regardless of age or gender. Troopers must run 1.5 miles in 13 minutes, do 32 push-ups in two minutes and complete 34 sit-ups in two minutes - or risk being passed over for a promotion. (An alternative test, pending a doctor's written permission, requires participants to swim 22 laps in 13 minutes.) Historically, fewer than 2 percent of the 2,100 or so troopers who take the test each year fail - and none have brought a legal challenge against the department.

"I personally feel it's great," says Lt. Al Della Fave, a trooper and public information supervisor for the State Police. "It forces you to get out and do something to stay fit, rather than just sit around. I'm 48 years old, and I'm already thinking, 'I gotta do this at age 52, 53, 54?' "

Founded in 1921 by U.S. Gen. Norman Schwarzkopf's father, the New Jersey State Police organization has traditionally advocated tough fitness regimens. "We have U.S. Marines who drop out of our police academy in the first week," says Della Fave, who joined the State Police after spending several years with another law-enforcement agency in New Jersey that did not offer a fitness program. He lost 40 pounds in less than six months. "I thought I was going to come into this agency and they were going to say, 'Oh, you were a cop before. You just sit over here and relax,' " he says. "They were actually harder on me because I was a cop."

The physical capabilities of police officers and sheriff's deputies, unlike those of most fitness enthusiasts who work out at health clubs and YMCAs, affect more than just the life of one person - elevating the importance of law-enforcement fitness, in many eyes, to life-and-death urgency. As Reynolds says, "When you choose law enforcement, you lose the right to be unfit."

While law-enforcement veterans like Hackett argue that too many of his peers still ignore those discount offers from local facilities, Bullard says some Palm Beach County deputies prefer to pay membership fees and work out in a club to avoid the workplace environment. Many area club owners, while respecting the department's decision to operate its own fitness centers, still market such amenities as swimming pools and nicer locker rooms to sheriff's office employees.

With more than two-thirds of the department's staff - plus limited members of the public - already registered users of at least one of the agency's fitness centers, officials are now planning the next phase of the "Get Fit-Stay Fit" program: establishing a voluntary awareness curriculum for employees, spouses and children, complete with wellness classes, physical assessments, fitness tests and personal training.

It's all part of the department's efforts to ensure a healthy future. "If we get a deputy fit, then his or her spouse will want to get fit, and then their kids will want to get involved," Bullard reasons. "We simply have to be physically fit. We have to slow down the aging process. We have to prevent diabetes and cardiovascular disease. And the only way someone can do that is to know how to do it. We now have the ability to do it."

New Emerging Sport Announced at U. of Montevallo

New Emerging Sport Announced at U. of Montevallo