What happened to recess? 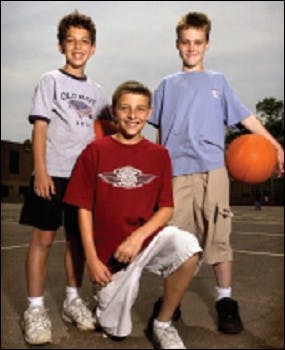 Talk about a major recession. In spite of skyrocketing childhood obesity rates (and skyrocketing awareness of same), an estimated 40 percent of the nation's 16,000 school districts have reduced recess time or cut it entirely over the past few years, according to the American Association for the Child's Right to Play. The reasons are myriad: fear of schoolyard violence or litigation resulting from injuries, anxiety regarding academic requirements of the No Child Left Behind Act of 2001 and a dearth of money (adding recess means a longer school day).

All of these are just excuses, say recess advocates. For every teacher who sees the positive role recess plays in managing classroom behavior, there are 10 who object to serving as playground monitors. Those who think it's simply easier for children to have five minutes of quiet time at their desks should know that research confirms that unstructured, outdoor play offers children many social, physical and mental benefits.

Having gotten this message, an increasing number of legislators, parents and even children are giving recalcitrant teachers' unions and school boards an earful. On the legislative side, recess appears to be getting a boost for reasons that are not really altruistic. In Virginia, for example, a bill approved by the House in April and now being considered by the Senate's education committee would require students in kindergarten through eighth grade to participate in 150 minutes a week of physical activity. Schools there are pushing for recess to be included as part of that 150 minutes, so that pay wage supplements and benefits need not be provided locally for the (presumably) additional physical education teachers who would have to be hired.

Elsewhere, it's the kids themselves or their families who say they've had enough with shrinking unstructured time. In a Montreal grade school, parents of children attending Ecole Notre-Damede-Grace scored a victory in May when they pushed for a referendum and then voted to reinstate afternoon recess, which had been eliminated by the school board.

Most impressive of all, though, has been the progress achieved by a group of Madison, Wis., elementary school kids. Prior to the 2001-02 school year, Crestwood Elementary School replaced its 15-minute outdoor morning recess with a 10-minute indoor break. (The kids still get a lunch recess and an afternoon recess.) As Doug Erickson reported in the Wisconsin State Journal, the change was part of a district-wide plan to lengthen the student lunch period in response to teachers' complaints that they were not getting their contractual 30minute duty-free lunch.

That fall, fifth-graders Michael Whayland, Byron Balkin and Connor Grosshans met in the lunchroom and decided to take action. Their school petition, written with the help of teacher Peter Plane, was signed by 280 Crestwood students and sent to the state Department of Public Instruction, which declined to get involved in what it called a district decision.

The story might have ended there, but then Joyce Hemphill, a classroom volunteer and parent of fifth-grader Carlton Hemphill, heard about Wisconsin's "We the People - Project Citizen" competition. "We the People" is a statewide contest promoting responsible participation in state and local government among young people. During the 2002-03 school year, 45 Crestwood fifth-graders took part in the project, which involves studying a public-policy issue and then developing a written action plan that is presented during a simulated legislative hearing. The Crestwood team won - as a result of which eight Crestwood students traveled to San Francisco last month to compete in the national competition.

Results were unavailable as of this writing, but win or lose, the students have thus far gotten further with state and national civic educators than with the Madison School Board. In June, Crestwood's by now seasoned public speakers made their case to the board, which while sympathetic said it couldn't afford to extend the school day five more minutes. After students, parents and even teachers made the case for recess, the board referred the issue to committee.