A popular federal grant program may be ending, and with it the recreation projects it funds. 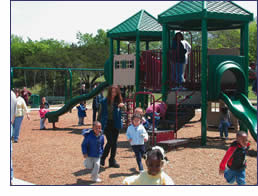 Photo of renovated Marlboro, Park in Killeen, TexasThe past two summers, 62 Johnson County, Kan., youths from low- to moderate-income families were given scholarships to attend day camps offered by the Johnson County Park & Recreation District. Valued at $950, each of these scholarships to the 10-week camp -- called Crossroads, because it introduces 11- to 13-year-olds to life skills in a recreational setting -- was made possible by funds from the federal Community Development Block Grant (CDBG) program.

Administered by the U.S. Department of Housing and Urban Development (HUD) since 1974, the CDBG program funds a wide variety of capital improvement projects and social services in more than 1,100 "entitlement" communities, or those that qualify for grants based on poverty, housing and population characteristics, as well as numerous other communities that receive trickle-down CDBG funds distributed at the state level.

The Johnson County Park & Recreation District day camp scholarship funds were a gift from Overland Park, a CDBG entitlement city located within Johnson County. For fiscal year 2005, Overland Park plans to send another $21,000 of its $775,000 in CDBG funds to the recreation district. But this year's gift may be the last.

In his FY 2006 budget proposal, President Bush plans to consolidate the $4.7 billion CDBG program and 17 other economic development programs that receive a combined $800 million in funding into one $3.7 billion program -- the Strengthening America's Communities Initiative (SACI). To be administered by the U.S. Department of Commerce, the SACI is intended to create an atmosphere of accountability among grant recipients and better target the country's neediest communities. According to the Commerce Department, 38 percent of CDBG funds currently go to communities and states with poverty rates lower than the national average of 12.5 percent.

Under the strictest of interpretations, Overland Park -- which, according to the 2000 U.S. Census, has a median household income topping $62,000 and a 3 percent poverty rate -- likely wouldn't qualify for federal community development funding. Florence Erickson, Overland Park's administrator of management services, doesn't deny that there are other communities in more dire straits than hers, but she also doesn't believe it's fair to allow "edge cities such as ours to fall behind, either. CDBG funds help our community remain the quality community that it is. It would be very difficult for us to get funds, because we tend to be in a higher economic bracket. But we're still a city with low- to moderate-income areas and low- to moderate-income people."

The final goal of the SACI is to streamline the federal government's economic and community development assistance programs. "There are currently 35 different federal economic programs scattered across seven agencies. Eighteen of those are direct grant programs scattered across five different agencies," says David Bearden, the Commerce Department's deputy assistant secretary for economic development. "So our first purpose is to consolidate all of those so that communities don't have to navigate, literally, a maze of different federal programs, eligibility criteria, accountability standards and purposes for which the monies can be used. Its purpose is to have a single point of entry to make it easier for a community to access funds."

But what Bearden calls increased bureaucratic efficiency, Erickson sees simply as an attempt by federal government officials to cut costs. "That's exactly what they are doing. If they transfer it to Commerce, they are combining 18 programs into one program, and they're not even funding that one program at the level they were funding CDBG," she says. "CDBG has not only funded Johnson County Park and Rec, but it has also funded our own city programs, and in those programs we've served 127 people. And back in the '90s, we developed two playground areas in our parks that are handicap-accessible, the first handicap-accessible playgrounds in our city. Without the CDBG dollars, those parks probably would not have been funded."

According to one HUD representative who requested anonymity, the CDBG program funded $103.3 million in parks and recreation facilities in FY 2004, and $96.6 million the year before. But those figures are only for construction projects that fall under the specific line item for parks and recreation facilities in the CDBG spending report. One can only speculate about the total impact of the CDBG program on parks and recreation agencies. "There are things like 'youth center facilities' -- now, what does that mean? That could be computer labs or it could be after-school places," says the HUD representative. "There's another category that says 'senior centers,' and who knows, there could be some sort of recreational component to that. Let's say there's a recreational building in some community and it needs a new roof; they may count that as 'public facilities and improvements.' So it's difficult to say -- there might be more spending for parks and recreation within all these activities."

It is also difficult for HUD officials to say whether the nation's parks and recreation agencies would be better served if the CDBG program remained in place. After all, the formulas used to determine a community's "entitlement," or automatic eligibility for grant funding, haven't been updated since 1978, four years after the CDBG program was initiated. The HUD representative admits that much has changed since the days of Jimmy Carter's presidency. "The country has gone through fairly significant demographic shifts," he says. "People are moving out of the Binghamtons and the Scrantons and they're moving to the Port St. Lucies and the Tucsons. With all these population shifts and changes in poverty and housing conditions -- changes in all the things that make up these formulas -- we have increasingly noted that CDBG has not done quite as good a job at targeting need as it used to, because the formulas are static."

However, the decision to adjust or even replace the CDBG funding formulas has been and remains that of Congress. In fact, the fate of the entire CDBG program and others like it depends ultimately on federal budget decisions to be made this summer. Whether park projects and recreation programs like those in Overland Park and Johnson County will continue to receive federal aid is at the discretion of Congress -- which, in both houses, has already expressed considerable support for retaining the CDBG program.

In March, with 66 senators (including 24 Republicans) voting for it, a budget resolution passed in the Senate that would restore full funding to the program and leave it under HUD jurisdiction. In addition, 55 senators representing both parties signed a March 2 letter to the Senate Appropriations Committee, asking it to maintain the current CDBG program and funding level. Likewise, 181 representatives sent a similar letter to the House Budget Committee, and the House of Representatives voted 218 to 214 to pass a budget document that would restore partial funding to the CDBG program and keep it within HUD.

Although some members of Congress undoubtedly had their own reasons for recording yea votes, they could not have ignored this spring's coordinated grassroots effort of the U.S. Conference of Mayors, the National League of Cities and the National Association of Counties, which sought to convince Congress to keep the CDBG program. In March, Erickson was among a coalition of Kansas public officials that traveled to Washington, D.C., to lobby on Capitol Hill.

Two months earlier, Leslie Hinkle, director of community development for the city of Killeen, Texas, joined other members of the National Community Development Association in Washington to impress upon their elected officials how much the CDBG program means to their local communities. In Killeen, CDBG funds have been used for a number of parks and recreation projects, including last year's renovation of Marlboro Park, located in a low-income neighborhood. Hinkle believes that one of the reasons behind the Bush Administration's desire to eliminate the CDBG program in favor of one with stricter accountability standards is that Washington politicians don't have firsthand knowledge of the CDBG program's positive impact.

"That's been the problem -- OMB [the Office of Management and Budget] released this study that said they couldn't prove the results of this program. Well, one of the reasons they couldn't is that the program is so flexible and you can do so many things with it," says Hinkle. "How do you develop a performance standard when you can do 200 different things? How do you develop a performance measurement that's going to capture it all? I think that's the link that has been missing in the program. We all know it's successful; I can drive around this city and show you how successful it has been. But to develop a performance measurement system that Congress is going to understand is a different thing."

Meanwhile, the performance measures suggested in the Department of Commerce's overview of the Strengthening America's Communities Initiative "will focus on the key drivers of economic growth and opportunity, such as job creation, new business formation rates, and increases in home ownership, commercial development and private-sector investment." While such phrasing may suggest that the proposed initiative will be ill-equipped to measure the impact of non-economic community development, such as park renovations or youth recreation programs, Bearden says that the aforementioned measures are only "illustrative examples."

To avoid the omission of any particular community group or interest, beginning in April a Secretarial Advisory Committee made up of 17 national and regional experts began holding public meetings in various communities throughout the United States. "We are reaching out to community leaders across the country, as well as to economists, leading community development thinkers and social services thinkers, to come together to advise the Secretary on some of the key elements that need to be contained in legislation to implement this initiative," says Bearden. "We're asking the advisory committee to advise us on things such as what the right types of accountability measures are that one would look at if your priorities are community development versus economic growth, or vice versa."

The advisory committee's recommendations were expected to be forwarded to Commerce Secretary Carlos Gutierrez by June 1. This month, the Commerce Department will also introduce to Congress proposed SACI legislation that Bearden anticipates will serve more as a "discussion document" than a formal, highly detailed piece of legislation.

Across the nation, meanwhile, community development officials in cities like Overland Park and Killeen continue to tout the benefits of the CDBG program and argue for its retention. "It has been around for 31 years and, obviously, something's working right," says Killeen's Hinkle. "Some minor adjustments may need to be looked at, but I think the elimination of the program would just be disastrous."