In its 10th year of serving seniors, SilverSneakers is hitting its stride. 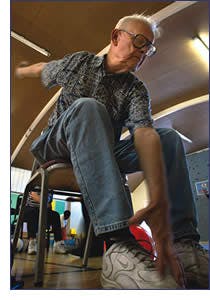 Photo of Irv Adams during a SilverStreaks sessionMary Swanson's first pitch drew laughter. Founder and CEO of Tempe, Ariz.-based HealthCare Dimensions Inc., Swanson way back in 1996 had an idea that was truly ahead of its time. As she told that first roomful of health-plan administrators, it was really quite simple: they would pay her company to set up a fitness program for seniors at local fitness centers, and she would use part of their money to reimburse the fitness centers, thereby saving the health plans thousands if not millions of dollars in costs associated with seniors' sedentary, unhealthy lifestyles.

A decade after Swanson begged and cajoled and finally signed up Intergroup of Arizona to be the test case for what she called SilverSneakers, she's the one doing the laughing. Sobered by exploding health-care costs and aided by the passage of the Medicare Modernization Act, health-plan administrators and insurers now do most of the begging. In the 18 months since the Act went into effect, SilverSneakers' growth has been phenomenal, from 15 health plan partners in a dozen states to 41 in 29 states. As this is written, the number of for-profit and nonprofit fitness facilities offering SilverSneakers, 600 a year ago, has just cracked 1,000 nationally.

It isn't as if health plans didn't recognize the upside potential of encouraging seniors to exercise. At around the time that SilverSneakers was beginning to gain traction, in fact, many health plans were designing wellness programs in an attempt to lower their costs. Judy Black, medical director with Highmark Blue Cross Blue Shield in Pittsburgh, notes that her group was offering exercise programs to older adults at local YMCAs and other facilities in the late 1990s. "We weren't able to really reach our members doing it ourselves," Black says. "Even at the height of our program, we only had 2,000 seniors participating."

Now Medicare-eligibles among Highmark's four million insured people can work out, for free, at 130 facilities in western and central Pennsylvania, all of which bear the Highmark SilverSneakers logo. Black says that Highmark began seeing positive outcomes "within the first month" of offering SilverSneakers in January 2004. "It was overwhelming," she says. "The seniors who participated were so positive about it. If I had the Highmark logo on a piece of clothing, people would stop me and say what a wonderful program it is. More recently, I attended a SilverSneakers class as part of a leadership training program, and a lady told me her friend is now able to get on the bus because she's able to lift her leg that high. We hear tons of stories like that."

The secret of SilverSneakers is no secret: It's a good idea that HealthCare Dimensions has worked hard to perfect and promote. The program is pitched to Medicare-eligible seniors (and people collecting Medicare disability benefits) not as exercise, which is conspicuously absent on its brochures, but as a way to stay healthy and live longer, and as an opportunity to socialize. SilverSneakers programs utilize handheld weights, resistance bands, balance balls and, particularly for beginners, chairs -- all in a low-impact exercise regimen designed to increase the physical activity level of older adults while building muscle strength, endurance, range of motion, balance, flexibility and coordination. Participating fitness centers provide staff for the program, trained by HealthCare Dimensions, while seniors get, as part of their fitness benefit, complete access to the fitness center. In an age in which for-profit and nonprofit providers sometimes wage unseemly fights for local dominance, the SilverSneakers program takes place in all kinds of centers: Local Ys and JCCs, mom-and-pop fitness centers, and Bally Total Fitness and Gold's Gym franchises.

Fitness centers are chosen not by their funding mechanism but by their proximity to seniors. When a health plan is ready to come on board, its membership files are sorted by zip code and potential program sites are selected accordingly. "We don't want centers to be any more than five miles from somebody's home," says David Goodspeed, director of corporate communications for SilverSneakers. "We don't want this population to have to travel -- and history tells us they won't. It's a big enough barrier for us to break to get them in the front door, let alone ask them to drive 30 minutes to work out."

Studies of SilverSneakers point out both the success and the continuing challenge to get seniors involved. Preliminary figures from a three-year observational study conducted by the University of Washington and funded by the Centers for Disease Control and Prevention showed that total annualized health-care costs for minimum- once-per-week SilverSneakers participants were 9 percent lower than for the control group in the study. A second study performed by Kaiser Permanente of Colorado drew similar conclusions, based on 4,766 subjects enrolled in the fitness benefit and 52,510 who elected not to enroll -- an 8.3 percent participation rate.

SilverSneakers' in-house data estimates that half of all participants have never set foot in a health club prior to joining. Says Goodspeed, "They're a little intimidated by fitness centers. But once they're in, they're hooked."

January 2004 also marked SilverSneakers' entry into the Tampa/St. Petersburg area, which it did under a contract with health insurer Humana. A network of 22 fitness centers was created, about 10 of which were smaller health clubs and YMCAs, with the rest being clubs in the Lifestyle Family Fitness chain. Geoff Dyer, Lifestyle's CEO, says he had wanted to introduce SilverSneakers at his facilities ever since he first heard about the program five or six years ago; he even explored the possibility of introducing the program without an insurance company to underwrite it. "We thought it would fill a niche in our clubs," Dyer says, but he held off in part because without an underwriter he couldn't market the program as SilverSneakers. The name, apparently, means quite a bit: Lifestyle Family Fitness had previously run senior programs, "but nothing was as effective as the momentum we got going when we got SilverSneakers," he recalls. "They provide T-shirts, and the members wear theirs as a badge of honor. The seniors promote the program, and they recruit others to join."

Since signing on with SilverSneakers in the Tampa area, Humana has seen its HMO participation increase and its costs of caring for participants in the program decrease. Based on those successes, Humana has subsequently committed to rolling out the program in 22 states. "They told me their doctors were skeptical, didn't feel the cost was justifiable," says Dyer. "But their attitudes changed once they saw claims decrease."

As a club operator, even a very enthusiastic one, Dyer says he'd wondered whether SilverSneakers might cannibalize his paid memberships at the hands of free memberships from Humana. The numbers, though, say otherwise. Over the course of 12 months, 22 existing members switched over to Humana, while Lifestyle introduced 3,600 people, 65 and older, to exercise. "In terms of broadening our reach, it had a fantastic outcome," Dyer says.

Added to that, Goodspeed notes, these new exercisers typically utilize their free memberships at times when clubs are underutilized. "Fitness centers love it, because these people are in there from 10 a.m. to 3 p.m., when no one else is there," Goodspeed says. "We're filling fitness centers at times that are most desirable to the centers, and with a population they haven't seen before."

Even still, purveyors of health and wellness say the program's greatest benefit hasn't been financial. Black, whose preliminary data shows that SilverSneakers has so far been a break-even proposition, puts more stock in the lady who is now able to ride the city bus. "We didn't go into this to make money," she says.

Dyer says the seniors' positive attitude has been infectious. "They're very upbeat, and have big networks of friends," he says. "Our group fitness instructors are ecstatic that they are really changing lives, because they are getting people out of chairs and getting them to walk again. Tremendous strides have been made in these peoples' strength over the course of 12 months. For all of us, it has been highly rewarding."