A new video from Rutgers asks student-athletes to play a lead role in preventing sexual assault. 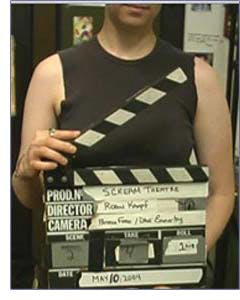 In a collegiate locker room, three members of a men's track team are discussing the "sick" house party set to take place later that night. Some "mad bitches" are expected to attend, including Dawn, a member of the women's track team on whom the party host, Zack, has set his sexual sights.

Meanwhile, in a residence hall room, Dawn and two of her teammates, having been given the night off from track practice, prepare for the party. Dawn has borrowed a short skirt and is looking "hot," her friends assure her. She uses the same term to describe Zack, and admits looking forward to spending time with him.

At the party, Zack's charms are working on Dawn, who agrees to a tour of the apartment. Once in Zack's bedroom, they discuss their exhausting dual roles as track athletes and college students. Zack mixes Dawn a strong rum and Coke, and offers her a massage. They kiss, and before Dawn can slow him down, Zack is on top of her -- raping her. Dawn's protests are met only by Zack's shouting in her ear to "Shut the f-- up!"

In the locker room the next day, Zack brags to his buddies of how badly Dawn had wanted him all along. But one of his teammates doesn't see it that way. He remembers Dawn leaving Zack's room at the party in tears. Zack warns his teammate to stay out of it, as does the third athlete, who points out that Zack's talented presence is needed if the team hopes to reach its championship goals.

At Dawn's place, the tears continue to flow. The roommate who lent her the skirt ("Do you know how many guys I've gotten with that skirt?") tells Dawn that she just can't go around accusing people of rape. The other roommate assures Dawn that it wasn't her fault, and that she was, in fact, raped.

"I'm an athlete. I should have been stronger," Dawn tells the camera in hushed tones, her head bowed. "I should have done something more." "Yeah, I heard her say no, but that's the game girls like to play," counters Zack, filling the screen with unmistakable swagger. "Girls are like lions in a cage, and I got the key to let 'em loose."

These are scenes from a new video, "The Locker Room and Beyond: Student-Athlete Leaders Challenging Sexual Violence," that was funded in part by a grant from the U.S. Department of Justice, produced by the Department of Sexual Assault Services and Crime Victim Assistance at Rutgers University this spring and debuted before an audience of Rutgers football players Aug. 26. The actors are actual Rutgers student-athletes who have volunteered their limited time and amateur stagecraft skills to the SCREAM Athletes program, the university's 10-year-old peer education initiative that specifically targets student-athletes on its campus and high school and college campuses across the country.

Also performed as live improvisational theater before groups ranging in size from fewer than a dozen to several hundred, SCREAM Athletes (the acronym stands for Students Challenging Realities and Educating Against Myths) began to receive more travel requests than its student-athlete volunteers could accommodate. Enter the video, a 25-minute window into the all-too-common campus social scene, scripted in large part by the student-athletes themselves. The language is profane, the simulated intercourse graphic and the message clear: Sexual assault cannot be tolerated.

"We showed the video to the football team and I asked them, `Do you think this is real?' And they said overwhelmingly, `Yeah, it's real,' " says SAS/CVA director Ruth Anne Koenick. "Student-athletes not only craft the script, they act it out in a way that they feel is very real. We fine-tune it for them, but this is theirs. They're students. They know what happens."

A mandatory viewing Sept. 18 by Scarlet Knight sophomores and juniors representing all sports garnered a similar reaction, according to SAS/CVA peer education coordinator Meghan Price, who facilitates Q-and-A sessions at live performances and video screenings. Amid the shocked facial expressions and uncomfortable laughter came some telling verbal feedback. "A lot of it was, `I cannot believe that I'm hearing this. This is what my peers say. I know this stuff,' " Price says. "They're not expecting that from a program like this. They're thinking that this is going to be in very formal language, and that it's going to go right over their heads. The realism, I think, is what gets people every time."

Just how real the threat of sexual assault is on any given campus can be hard to pin down, since it is estimated that as few as five in 100 campus incidents are actually reported. "National research tells us that every year, about 4.9 percent of women on any college campus will be the victim of an attempted or completed sexual assault. You translate that to Rutgers and it's like 900 people," Koenick says. "People know people who have had this happen to them, and student-athletes aren't any different from anybody else."

While conducting the video presentation to the Rutgers football team, Koenick asked an audience of 115 players how many of them personally knew a victim of sexual assault. Roughly a third raised a hand. That familiarity is significant. Rutgers-specific research -- involving surveys of 205 sophomore and junior student-athletes, as well as nine team focus groups and 22 individual interviews -- "found that the two most significant variables for predicting whether someone accepts rape myths are being male and not knowing someone who has been sexually assaulted," says Koenick.

One such myth, that female athletes can't be raped because they are physically strong, is at the center of "The Locker Room and Beyond." Other themes touched on in the video include the accepted view among some men of women as dehumanized conquests, as well as the character required of others to challenge that belief.

Sarah McMahon, SAS/CVA coordinator of research and evaluation, says that while gathering the Rutgers data as a Ph.D. candidate in 2001-02 she found some evidence of male athletes willing to "sanction" violent behaviors toward women while in the context of their team focus groups, but that they were less likely to do so during individual interviews. "I also found a lot of positives," she adds. "I found a lot of student-athletes who have already stepped up to intervene in situations they thought were abusive, as well as student-athletes who said they would be willing to do that."

Says former Rutgers men's track athlete and SCREAM Athletes alum Sean Stallings during one video segment, "The true measure of courage is to have the confidence in yourself to be different -- to step away from your peers and actively and openly come out and say, `I don't stand for this.' "

This, ultimately, is what student-athletes exposed to "The Locker Room and Beyond" are left with: a call to do the right thing. The video's fictional characters eventually give way to the real-life Rutgers athletes who play them, each offering insight into sexual assault and encouragement to take a stand against it. Cycerli Ash, the Scarlet Knights track athlete who plays uncaring roommate Candy, bluntly states, "We do not need people like Candy, period." Also lending commentary to the video are, among others, Rutgers director of athletics Robert Mulcahy ("We have a unique opportunity on college campuses to take a strong leadership role"), football coach Greg Schiano ("With the privileges of being a big-time athlete there comes responsibility") and recently graduated softball player Crystal Vargas ("Student-athletes have a responsibility to set an example and speak out against violence on college campuses"). The video and accompanying 23-page facilitator's guide, which offers discussion points, learning activities and sexual-assault statistics, is available to any college or high school for $150 (visit sexualassault.rutgers.edu).

"We know that there are some things that may be part of the athlete culture at Rutgers and at other institutions that make it more conducive to the occurrence of sexual violence, but we also know that there are things in place that allow student-athletes to take leadership against violence," Koenick says. "They're recognizable. Team captains and others in leadership positions in the athletic community can draw on their unique status and work to create a community that doesn't tolerate violence against women."

Though hard to gauge based solely on unreliable reporting data, Koenick remains convinced that tolerance for sexual violence at Rutgers is eroding. "I've been doing this work for 35 years, and I don't know if more reports or fewer reports tells you you're doing a good job," she says. "I think what tells you you're doing the right thing is when you have students eager to be part of it, when you listen to conversations and hear change, when you hear people talk about this in a way that says, 'Ah, somebody gets it,' when you have the wholehearted support of an athletic director and coaching staff. This is different than it was 15 years ago. That's the kind of impact I look for. I think that's a sign of success."