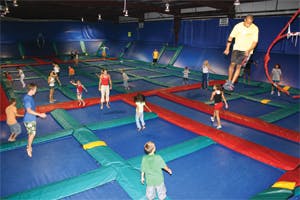 the University of Nevada, Las Vegas, is the quintessential commuter school, boasting 28,000 students - only about 2,000 of whom actually live on campus. This fact presents campus recreational services director Jeff Wells with the sometimes daunting task of persuading students to participate in intramural programs. But Wells hasn't found it too difficult to get students to sign up for two recently added sports, Skyball and 3-D Dodgeball. It helps that the two programs are hosted at a site located six miles from the UNLV campus, enabling Wells to literally meet his students halfway. But even more important, Skyball and 3-D Dodgeball are unlike any other sports Wells' department has ever offered.

They're played on the all-trampoline indoor playing field of the SkyMania Fun Center, a converted warehouse located on the eastern fringes of Las Vegas. There, 65 four-sided trampolines are elevated several feet off the ground and lashed together to create what could be referred to as one giant three-dimensional playground. Even the field's sidewalls consist of trampolines, all of which are angled away from the field at 45 degrees.

The unusual design of SkyMania's playing surface can be attributed to its original purpose of hosting a professional team sport called SkyZone (imagine rugby on trampolines), created and patented by SkyMania owner Rick Pratt several years ago. But now this former training and competition venue for elite athletes serves as a giant playground for recreational athletes, too, accommodating open jump sessions and SkyRobics classes (a distinct brand of aerobics), as well as organized games of 3-D Dodgeball and Skyball, which is the non-contact version of SkyZone.

For the past two years, UNLV Campus Recreational Services has partnered with SkyMania to offer students the opportunity to register teams for $50 each to play 3-D Dodgeball in the spring and Skyball in the fall. Despite the games' challenges - or perhaps because of them - 3-D Dodgeball and Skyball have become two of the most popular intramural programs at UNLV. Each of the past two fall semesters, 25 teams of 10 players have registered for the weekend Skyball program. Meanwhile, 3-D Dodgeball, which this past spring was held on Tuesday nights, drew 35 team registrations.

Wells sometimes wonders if the students who sign up for these sports are gluttons for punishment, given the games' exceptional physical demands. "It's just so taxing," he says of Skyball, which is played by four-on-four squads on a field measuring 85 by 57 feet (the sidewalls are 8 feet high). "You need a team of about 12 to survive. We do three seven-minute periods, and people are just exhausted after the first minute-and-a-half. They're looking for subs."

Skyball is exhausting for a number of reasons, aside from the fact that the hyper-resilient surface forces players to constantly remain in motion. Throughout the game, players can run, jump, soar and flip with or without the ball and pass, bounce, kick and head the ball to advance up the playing field.

At each end of the tray-shaped playing field are two goals that are suspended 7 feet above the playing surface and rotate 360 degrees every 13 seconds. Each goal consists of a 5-foot-diameter ring topped by a smaller, 26-by-32-inch triangular goal. Points can be awarded for throwing the game ball (a size 2 handball) through the small triangle (2 points) or by leaping through the ring while in possession of the ball (7 points). The game's most challenging aspect involves defending the rotating goals.

Of course, not everyone possesses the acrobatic technique necessary to excel at Skyball - according to Pratt, only a few people are athletic enough to successfully and safely leap through the goal - meaning that the majority of the sport's participants aren't adept at falling properly on the trampolines. Injury risk at SkyMania has been mitigated somewhat by high-density foam padding that is discreetly stitched into the jumping surface at each junction point. Wells compares the injury risk to that of pickup basketball. "If I'm coming down with a rebound and your foot's under mine, I'm going to roll it," he says. "There is a little bit of a rise between the trampoline beds. People who catch a foot on that rise have a tendency to roll their ankles because it's a little bit uneven. But from our standpoint, like everything we do in our industry, the risk of injury is somewhat signed away. Our legal office went through everything and we have releases and liability statements that every participant must sign."

Wells' liability stance is slightly more cavalier than that of the city of Las Vegas Department of Leisure Services, whose risk management professionals decided the city could afford to assume the risk of using the facility for 3-D Dodgeball, but not SkyBall. Last year, Las Vegas Leisure Services contracted with Pratt to use SkyMania to add 3-D Dodgeball to its slate of 30 sports for Corporate Challenge, the state of Nevada's largest amateur sports tournament that attracts as many as 125 company teams each year.

Corporate Challenge companies - which are categorized into four divisions according to how many people they employ - pay one registration fee and have the choice of participating in whichever (or as many) sports as they'd like. This year, 64 teams signed up for 3-D Dodgeball. According to Corporate Challenge coordinator Andrea Anzalone, it's an event that participants eagerly anticipate. "Corporate Challenge runs for 10 weeks," she says. "But for months preceding the games, they go out there and start practicing on their own. There are 40-, 50- and 60-year-old people out there playing on these trampolines. It's awesome."

When Pratt first created the sport of SkyZone in 1997, he fully expected to entertain middle-aged business executives - but as spectators, not participants. Pratt has long since put the development of his "ultimate team sport of the future" on the back burner, and for good reason. In the two years since SkyMania was converted from a research and development center and opened to the public, it has drawn a diverse crowd of 200,000 visitors - from out-of-shape baby boomers to champion martial artists to physically disabled children. "We can't find anybody who doesn't benefit from it," he says. "Take an 8-year-old couch potato who hates exercising. He can go up and simply play and have the time of his life - and get a great workout."

This summer, Pratt took the next step in his mission to whip Americans into shape by opening the second SkyMania in Chesterfield, Mo., just west of St. Louis. The 23,000-square-foot facility includes three party rooms, one of which opens to a large mezzanine overlooking a smaller playing field, and a second mezzanine that overlooks the main field. Rounding out the complex are men's and women's locker rooms, a concessions stand and a store selling SkyZone merchandise, including shoes that feature enhanced ankle support and treaded rubber soles made specifically for trampoline jumping.

UNLV's Wells will likely be among the first to demonstrate the shoes to the St. Louis locals. Pratt has recruited Wells to share his experiences with Skyball and 3-D Dodgeball with his Missouri-based campus recreation colleagues. Wells already knows the basic outline of his presentation. "These first two years, we've just about broken even. The overhead is very minimal for us because we basically go over to their venue and use their equipment," he says. "Plus, we're giving kids an opportunity to try something new."