Division III colleges and universities sign up for the NCAA's pilot program of year-round drug testing. 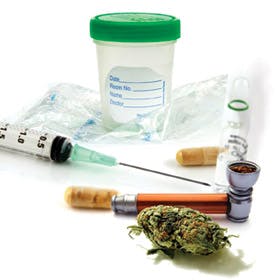 Steve Terry takes great pride in sharing that the University of Wisconsin-Stout was among the first institutions to sign up last October for the NCAA's pilot program of year-round drug testing in Division III. "Performance-enhancing drugs are cheating," says Terry, Stout's athletic director. "They don't belong here."

"Here" is a campus of 8,400 students located 70 miles east of Minneapolis - a small corner of the intercollegiate athletics universe, to be sure, but one that only months later was rocked by a steroids scandal. Police arrested two Stout football players in December when separate searches of their residences produced four containers of liquid steroids, as well as street drugs. Then, on Feb. 8, one day after a local prosecutor indicated that he might broaden his investigation of steroid use within the Blue Devils football program, Stout officials announced that the entire team would face cocaine and marijuana tests in the spring, while a quarter would be subjected to random steroid testing.

Admittedly devastated by the turn of events, Terry realized that the decade-old and vaguely worded "UW-Stout Athletic Department Drug, Alcohol and Substance Abuse Policy" didn't come close to addressing the urgency of the situation at hand. That's why he contacted The National Center for Drug Free Sport to help Stout establish stricter drug protocols, with the likelihood that the NCDFS will handle Stout's testing, as well. "The old philosophy when these codes of conduct were being developed was, 'Don't embarrass your team. If you embarrass your team - whether that means urinating in public or doing steroids - you can be suspended.' That gave the coaches a lot of autonomy," Terry says. "When this situation happened, it became pretty obvious we needed to create strict consequences and use testing as a deterrent."

By doing so, Stout joins a small group of peer institutions. According to 2005 NCAA survey data, only 13 percent of Division III institutions test their student-athletes for drug use. In Division I-A, the prevalence of institutional testing tops 90 percent. Frank Uryasz, president of the NCDFS, which handles all of the NCAA's drug-testing programs, says two factors may be influencing that disparity: philosophy and finances. Division III schools strive to treat their student-athletes as they would any other student, and Division III schools don't have abundant resources to invest in drug testing. (A single test for steroids can cost as much as $125, while a test for street drugs costs roughly a fifth as much.) Yet, Uryasz notes that there is no significant difference in self-reported steroid use between Divisions I and III. "There's this perception that steroids are used only at the highest levels of sport," he says. "But competition is competition. Unfortunately, we find steroid use in all kinds of situations. It's not just the Division I athlete who wants to go on to the NFL."

At least Stout doesn't appear to be alone in recognizing that the time has come for Division III athletics administrators to join their counterparts on the anti-drug front. As evidence, Uryasz points to healthy interest in the NCAA's two-year pilot program, which will begin year-round, short-notice random testing of Division III schools in August. "There were actually more Division III schools that signed up for the program than we could accommodate the first year," he says. "More important, it was the Division III Student-Athlete Advisory Committee that really pushed for the program. The athletes are very supportive of drug testing."

Likewise, Terry reports enthusiasm among Blue Devils coaches for the new hard line being drawn at Stout (football coach Todd Strop resigned in January). "Every institution that has gone through this type of thing has gotten better, and I hope that will happen for us," Terry says. "I look at this as an opportunity. We're not sticking our heads in the sand. We'll be testing our kids, we'll be running a clean program, and everybody who comes here will know that."