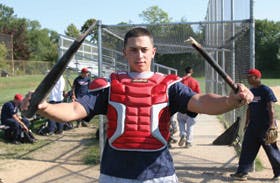 The crack split the warm September-afternoon air as the wood bat in the hands of Rene Gordis, a catcher for Stepinac High School in White Plains, N.Y., broke on the first pitch of the first practice of the team's 2007 fall baseball season. It's a sound players and coaches would be hearing a lot more during the six-week season after a federal judge ruled that New York City's high school metal-bat ban - approved over objections from Mayor Michael Bloomberg - was indeed legal.

"That was just a sign of things to come," says Wally Stampfel, baseball commissioner of the New York Catholic High School Athletics Association and varsity baseball coach at Mount St. Michael Academy in the Bronx. Stampfel's team broke two wood bats during the first four days of the ban, which took effect Sept. 1. "This really is a whole new era for all of us, and we've got a lot to learn." (The CHSAA extended the bat ban beyond New York City to all of its member schools, including Stepinac, to ensure competitive balance.)

"There were 20 Catholic high schools in New York City flying blind," says Trent Duffy, spokesman for the national Don't Take My Bat Away Coalition, formed in response to the New York City Council's decision last spring to outlaw aluminum and other metal-alloy bats. The organization eventually took the city to court over the issue. "Our coalition is not for metal bats or against wood; we're just for player choice."

The National Federation of State High School Associations, the New York State Public High School Athletic Association and the CHSAA have all deemed metal bats safe if they adhere to specific diameters, lengths, weights and ball-exit speeds, and numerous studies of whether balls hit with metal bats cause more injuries than those hit with wood ones remain inconclusive. Even U.S. District Judge John G. Koeltl admitted in his ruling that "the record does not include clear empirical evidence showing that more serious injuries would occur without the ordinance." But, he added, it is the city's "legislative assessment that the risk is too great."

Less than 24 hours after the Aug. 28 ruling, Stampfel sent a letter to New York City Council Speaker Christine Quinn, requesting guidance regarding enforcement issues and budget concerns. (All wood bats approved by Major League Baseball are reportedly fair game, under the ordinance.) "I'm troubled that some of these questions may be flaws in the law that the city never thought of," he wrote. As of this writing, Quinn had yet to respond to Stampfel's letter.

In the wake of all this, James Oddo, the New York City councilman who sponsored the bill, adamantly reinforced his position. "Hopefully, this decision is a green light for other jurisdictions to bring safety back to the game," Oddo told USA Today, adding that the city planned to approach the New York Mets and Yankees about helping provide bats to schools. "Some jurisdictions may not rush right out and do it, but the first time there's a [safety] incident, there will be a parent or coach who will say, 'Wait a minute. Didn't New York pass that law?' "

Legislators have already taken it upon themselves to change laws in their own states. A group of Pennsylvania lawmakers has proposed prohibiting the use of metal bats in both baseball and softball for all players under 18 - which could mean trouble for the Williamsport-based Little League World Series - and state politicians in New Jersey and New York are considering similar moves. The youth football organization, Pop Warner Little Scholars, recently signed on as a member of the Don't Take My Bat Away Coalition in a show of solidarity. "We're concerned that government will interject itself in our sport," says Josh Pruce, Pop Warner's national director of scholastic and media relations.

Massachusetts became the first state to ban non-wood bats from state tournaments in 2003, a rule created by the Massachusetts Interscholastic Athletic Association. But officials reneged the following year, citing a lack of consensus about whether wood really is safer than metal. They never looked back, despite at least two subsequent proposals to reinstate the ban. Earlier this year, administrators at the North Dakota High School Activities Association voluntarily abandoned metal in favor of wood bats, which hold up better in the state's 50-degree temperatures. Athletics administrators and coaches there report few repercussions (see "Eye on the Bat," July, p. 96).

That, according to Stampfel, is the process through which major policy changes should be made in sports. "My hope is that if anything like this is done anywhere else, it's not done by the politicians," he says. "It should be done by the powers that be in the individual sport. If our athletic directors and principals came to me and said, 'Hey, listen, we're mandating wood bats for CHSAA baseball,' it would have been so much easier to take. This came from people who aren't experts in the field, and that's hard to deal with."