Welcome to the modern watch party -- the next best thing to being there. 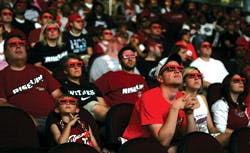 Thousands of fans file through magnometers on their way into the arena. Concessions workers serve up a full menu of game-night fare along the concourse. Dancers perform their routines at center court. Staffers with slingshots launch T-shirts into the seats. A mascot offers high-fives to wide-eyed kids. And all the while, the players ready themselves for competition - in a locker room 1,200 miles removed.

Welcome to the modern watch party - the next best thing to being there.

"It's really a regular game night for us," says Tad Carper, vice president of communications for Quicken Loans Arena, home of the Cleveland Cavaliers and site of five such parties during the Cavs' playoff run through the 2007 NBA Finals. The free events drew between 12,000 and 18,000 fans, requiring a full complement of police and security personnel, guest services staff and ushers to keep fans watching the action unfold from San Antonio on 20-by-30-foot scoreboard screens (the largest in the NBA, according to Carper) from getting too crazy around a vacant court in Cleveland.

"There is a considerable cost to open the building for that many people. It's an expensive endeavor, but we think it's one that makes sense," says Carper, adding that corporate sponsorship and concessions sales are typically enough to balance the books. "It's not a profit center for us; it's really just a fan-connection focus. And we have never had any security issues with it."

That's not to say security issues can't arise. A planned Game 6 watch party at Staples Center in Los Angeles was canceled during this year's NBA Finals after violence marred the so-called "Home Court Advantage" event the Lakers held there for Game 2 - which the Boston Celtics won at TD Banknorth Garden, a full continent's width away. In one of several reported fights that night, Lakers fans can be seen in a YouTube video attacking an individual wearing a Celtics jersey. One perpetrator who hurled a chair was later identified and charged with assault with a deadly weapon. The brawlers were among the 8,000 people who had paid between $10 and $15 to attend the watch party (5,200 attended the party held during Game 1), with proceeds going to youth-oriented charities. However, arena officials determined that the strain on civic resources to ensure fan safety during future events - 130 LAPD officers were on hand for Game 2 - outweighed the benevolence.

"Remember when L.A. sports fans were pitied far and wide as iced-tea-sipping dilettantes who lack the 'passion' to properly paint our faces, cheer our opponents' neck injuries and throw rocks at uncooperative referees like the real aficionados back east?" asked Los Angeles Daily News sports editor Kevin Modesti in a column about the cancellation. "Well, good news! Our reputation is saved. Now L.A. fans look like morons, too."

In fact, Boston fans have managed to build a recent track record of civility - at least in watch party settings. Thousands converged on City Hall Plaza to watch Italy play France in Germany for the 2006 World Cup on a 27-by-20-foot outdoor screen. The event was organized by Mayor Thomas Menino in honor of his ancestral homeland and Boston's nearby Italian-rich North End. No hooliganism was reported.

Boston University has hosted campus gatherings when the city's pro teams have vied for titles. Last October, 1,500 students showed up on the spur of the moment to see the Red Sox potentially sweep the Colorado Rockies during a World Series Game 4 watch party at Nickerson Field, the Terriers' baseball venue. Three months later, more than 2,100 attended what was billed as "The Biggest Super Bowl Party BU Has Ever Seen" at the school's new ice hockey facility, Agganis Arena. Fans watched the game played in Glendale, Ariz., between the New England Patriots and New York Giants on 9-by-13-foot center-hung scoreboard screens that were lowered for optimum sightlines. Others chose to watch from rink level during a free skate. Giveaways included flat-screen televisions, Xbox 360 game consoles, iPods and Patriots paraphernalia. Security guards stood in the aisles during the game's frenetic final two minutes, and the event went off without incident, according to The Daily Free Press student newspaper, despite New York's upset victory and the presence of more than a few Giants fans. The event was organized as part of the university's participation in Operation Student Shield, a citywide initiative to take celebrations off the streets as a means of preventing post-game vandalism and violence.

Whether perceived as a safe celebration alternative or as potential trouble, large-scale watch parties remain somewhat of a rarity in any given sports season since relatively few teams play in games big enough to warrant them. Even the Cavaliers, among the concept's most enthusiastic practitioners, wait until the team reaches the Eastern Conference finals before considering opening "The Q" to revelers. Earlier playoff watch parties - featuring the Cavs' dance team, mascot, giveaways and even TV broadcast talent - are held in local eateries. "A lot of teams do the off-site restaurant thing. Taking it in-house, though, when you're potentially going to operate the building at 75 percent or greater capacity, is a pretty significant commitment," Carper says, without a hint of regret. "For us, we're trying to fan the flames of excitement in the community, and we think this is an obvious way to do that - get everybody together and provide that typical game-night atmosphere."