Coaches and administrators are encouraged to push back against football players' dangerous weight gains. 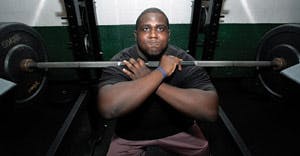 In a culture in which bigger always seems to mean better, it's no surprise that recent studies indicate America's high school football players are getting bigger. Way bigger.

But Brockton's bruisers aren't all that rare these days. Researchers at Iowa State University last year discovered that 45 percent of the offensive and defensive linemen playing football at Iowa high schools were overweight, while almost 10 percent fit medical standards for severe obesity. Another recent study (of Michigan athletes) found that 45 percent of 650 football players between the ages of 9 and 14 also were either overweight or obese.

"Any sport can have obese athletes, if the players think that size can give them an advantage," says Dawn Comstock, an assistant professor of pediatrics at The Ohio State University's Center for Injury Research and Policy. "We need to be very careful that kids don't take sports participation as an opportunity to think that being heavy is good. Sports play such an important role in teaching kids the importance of establishing physical activity as part of an everyday healthy lifestyle, but those heaviest athletes may be less likely to continue participating in sports after their high school days are over."

A recently completed, still-unpublished study by the CIPR (based on height and weight data collected for Comstock's ongoing national high school sports injury surveillance study) indicates that 33 percent of 12,092 student-athletes in nine sports injured between 2005 and 2007 were overweight or obese. At 54 percent, football had the greatest proportion of injured overweight or obese athletes, followed by wrestling (30 percent), baseball (29) and boys' basketball (20). In football, the most frequent injuries to oversized players were to their ankles and feet.

"There is some indication that overweight or obese athletes are more likely to incur an injury than normal-weight athletes," says research associate, OSU grad student and women's football player Ellen Yard, who oversaw the study. "It would be great if we could change the culture and stress being athletic and muscular, not just big. I've played with players who are really big. Unfortunately, I think the coaches played them because they were really big and not because they were really athletic. It's crucial for coaches and athletic trainers to stress the importance of healthy eating behaviors and weight gain."

Therein lies the challenge. Comstock and some of her fellow researchers surveyed student-athletes from Columbus-area middle and high schools last spring during pre-participation physicals about their assumptions and behaviors regarding performance-enhancing substances. Some of the responses they received were startling. "One mother looked up at her very large son with pride and told me, 'Oh, you'll really want to survey him. He's been working hard to get ready for football next fall and has been having creatine every single day,' " Comstock says. "That shows that parents aren't as knowledgeable as they need to be. Linemen can get bigger - that's fine - but they need to do it through a healthy diet and monitored weight lifting, not by chugging down multiple protein drinks or having three meals a day at McDonald's."

Comstock says many performance-enhancing substances are not regulated by the U.S. Food and Drug Administration and contain dangerous and sometimes banned ingredients that can show up in drug tests. And a diet of fatty, high-calorie food can lead to diabetes, cardiovascular disease and joint problems, among other conditions. "Many oversized kids are looking ahead to college and professional playing careers without ever realizing how few actually make it to those levels," Comstock says.

"We're going to do a better job of getting information out there," promises Bob Colgate, an associate director of the National Federation of State High School Associations, who works with the organization's Sports Medicine Advisory Committee. "A small percentage of kids go on to play college football, and an even smaller percentage go to the NFL. People need to look at the big picture."

The big picture includes only one in 17 high school senior football players who make a college team, according to the National Collegiate Athletic Association, and just one in 50 college players who eventually are drafted by the pros.

The NFL's Play 60 initiative, which encourages kids to be active for at least one hour every day, celebrated its one-year anniversary on a Tuesday in early October by dispatching players around the country to rebuild parks, conduct football clinics and send the message that athletes can be both big and healthy. "We're really just big kids playing the game," Roberto Garza, the Chicago Bears' 6-foot-2, 310-pound guard told The New York Times. "In the NFL before, you could see a lot of big and out-of-shape guys. Now, you see a lot of offensive linemen who are really buff. We're trying to say you can be like NFL players - you can be healthy and lead a better lifestyle."

"The reality is, kids are just bigger now than before," added NFL Commissioner Roger Goodell. "Whether in professional sports or outside, we all look different. It doesn't mean you can't be physically fit."

The NFHS is expected to consider strategies early next year to help student-athletes gain weight safely, but will stop short of suggesting exactly how much weight they should add. "Could a national governing organization come out and set a limit on how big a football lineman can be? That's just not going to happen," Colgate says, at least not until there is medical research supporting such weight limits.

The medical community's next step, Yard says, is research that follows oversized athletes from high school into their post-playing careers and charts their physical activity - or lack thereof. "Gradually, as we start to see the long-term effects of obesity on former high school athletes, I think there will be a growing emphasis on changing the culture and making the entire population of athletes more physically fit," she says.

For now, though, Comstock and Yard suggest careful and continual observation of student-athletes who are packing on the pounds. "It's really a community effort," Comstock says. "It starts at home with the parents, and then it moves to the entire school environment. The athletic director, athletic trainer and coaches all need to work together to make sure these kids are hearing over and over the right messages and being provided the proper guidance. Being big for their senior season, if it's done in an unhealthy way, can lead to lifelong negative health consequences."